Return to Fordham Law School
You are at:Home»Fordham Lawyer»Features»Preparing a Path for Tomorrow’s Lawyers

Two years ago, Fordham Law launched an ambitious campaign to increase its scholarship fund by $25 million. Now, halfway into the Dean’s Scholars Initiative, the School has raised well over half its goal.

“The support of the Fordham Law community for future generations of Fordham lawyers is inspiring,” says Dean Matthew Diller. “These gifts allow talented students to attend Fordham Law, who will then go on to effect great change in their communities. These scholarships create a ripple of service that radiates out through society. An education for one Fordham Law student ultimately impacts the lives of many.”

Motivations for giving to the campaign are as diverse as the contributors themselves. However, whether contributing in honor of a relative, in thanks to a supportive institution, or in the interest of tying a law firm’s legacy to that of the School, benefactors are united in their belief in the quality of a Fordham Law education—and their commitment to making that education available to the next generation of promising young lawyers.

Founder and chair of Quinn Emanuel Urquhart & Sullivan LLP’s bankruptcy and restructuring group Susheel Kirpalani ’94 conceived of his gift to Fordham Law while fulfilling one his most pleasant professional duties— interviewing promising Fordham students for positions at his firm.

“A Fordham 2L student came to interview with me at my firm, and I was really looking forward to it because she was a superstar,” says Kirpalani. “But she told me during the interview that she was transferring. I asked her why she was doing that. She said, ‘Well, I ultimately want to secure a clerkship.’”

Kirpalani quickly pointed out to the student that Fordham’s alumni network includes several prominent federal and state judges. The student, however, insisted that only applicants from the very top-ranked law schools had access to the prestigious, circuit court clerkships she coveted. Troubled by this attitude, Kirpalani met with then Fordham Law Dean Michael M. Martin about how he could help bolster Fordham’s prestige, to ensure that the School’s students had access to career opportunities befitting the quality education they received.

“I don’t understand why we need to ever think that what we can do for our students is different than what other schools can do for their students. It’s just a question of how Fordham is perceived,” says Kirpalani.

That meeting with Dean Martin led to Kirpalani’s current position as a leader in helping provide access to education at Fordham. Most recently, he has committed to providing funds to put four students through Fordham Law debt-free, and has separately committed to endowing a scholarship fund that will allow Fordham students to pursue legal work in the public service arena.

Kirpalani says that his interests in increasing Fordham Law’s profile and in providing opportunities for its students are one and the same.

“The only way that Fordham will continue to prosper is if its young talent moves on and does things that give back to society in some way that’s linked to being free of the shackles of student debt,” he says.

Though Kirpalani has found resounding success in his career— working on high-profile bankruptcy cases involving Enron, Lehman Brothers, and the city of Detroit—he says that his own consideration of public service work after law school was curtailed by practical realities.

“Unfortunately, public service work was not something that I was able to do with my education given my financial situation,” he says. “However, now I can use my resources to help other students pursue public service careers, and that’s something I want to make happen.”

He sees his contributions to Fordham as a way to further his interest in the public good, while also helping ensure the School’s future.

Colleagues, United by a Law Firm, in Service of an Alma Mater

Palmina Fava ’97, Michael Fitzgerald ’79, and Michael Rosella ’81 graduated from Fordham Law School in different years, but found themselves united later in their careers at Paul Hastings LLP, the prestigious international law firm where all three have achieved partnership. Though diverse in terms of their practice areas and career paths, the trio agreed that their education at Fordham had been essential to their success.

“Fordham alumni—at Paul Hastings and elsewhere—benefit from alumni support, whether it’s alumni giving of their time or of their money, or both,” says Fava. “And it’s our responsibility in living the mission and the motto of Fordham—being in the service of others—for us to pay that back.”

With a robust network of Fordham alumni working throughout the firm, Fava, Fitzgerald, and Rosella felt that it made sense to honor the relationship between Paul Hastings and Fordham with a contribution to the scholarship fund in the firm’s name.

“There are quite a few Fordham Law School graduates at Paul Hastings, particularly in New York, and it’s a great opportunity to further what I think is a strong feature of Fordham: reaching out to a less privileged population and being able to help provide a top-quality law school education for that population,” says Fitzgerald.

Fully aware of the rising cost of legal education, Fava, Fitzgerald, and Rosella felt that providing opportunities for law students who lacked the resources to pay for law school outright would help in two ways: first by making Fordham competitive for top students, and second by giving Paul Hastings connections to those top students as they became top attorneys.

“When I went to law school you could finance your entire year of tuition by borrowing $5,000 from a little savings bank,” says Rosella. “Those days are long gone. The cost of education is obviously no longer financed with a small loan of that amount, and I understand how important these scholarships are to helping students who will be fine lawyers one day to have great access to Fordham Law School.”

Nurtured, Challenged, and Prepared for Success

Alec Cohen’s career at Fordham Law School got off to a rocky start. Attending the Law School at night while he worked days at the French bank Credit Agricole, Cohen ’97 was shocked when he very nearly failed his first exam in Professor Gail Hollister’s torts class. 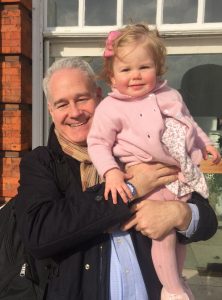 Alec Cohen with his daughter Rosie

“Although I was pretty upset at getting a ‘D’ on my first law school exam, Professor Hollister was possibly more upset than I was,” Cohen says. “She spent lots of time with me going through the exam and explaining what I did wrong. Eventually, I think I got a ‘B’ in the class.”

Professor Hollister’s attentiveness characterized what Cohen described as the supportive environment at Fordham, which gave him a strong affection for the School. Now the head of European capital markets legal for Credit Agricole, Cohen credits Fordham with having given him the tools necessary for his success, and for having provided an environment that made such success possible.

Currently stationed in London, Cohen says that his education at Fordham formed the basis for his thriving, international career, as well as inspiring his contribution to the Dean’s Scholars Initiative.

“I felt very nurtured,” he says. “It was really very intellectually challenging and interesting and I loved the professors. So the whole experience was great and I want to support the School.”

Beginning with the graduation of John Aloysius McQuillan from Fordham Law School in 1915, the McQuillan family has sent members of each subsequent generation to Fordham University for their undergraduate, graduate, and legal educations. When Beth McQuillan and Carl Pernicone graduated from the Law School, in 1984 and 1983 respectively, they marked the third generation of the McQuillan clan to have attended.

“Our relatives have attended law school at every site where Fordham Law has been located,” says Pernicone. “When my grandfather graduated, the Law School was located downtown at 140 Nassau Street. My dad, in 1938, was in the Woolworth Building. My mother was a graduate of the 301 Broadway building. And Beth and I are graduates of the old building on the Lincoln Center campus.”

McQuillan and Pernicone, who are first cousins, experienced many of the same benefits as their forebears who had attended Fordham Law, including the inspiration of distinguished colleagues and professors.

“Throughout the years, John Feerick has been the role model for the type of lawyer I wanted to be,” says McQuillan. “His example of professionalism and deep concern for other people has always been very inspirational for me.”

McQuillan and Pernicone have sought to embody those standards of professional conduct in their own careers—McQuillan as an attorney for Colgate-Palmolive and Pernicone as an insurance practitioner at Wilson Elser Moskowitz Edelman & Dicker LLP.

Now, with their contribution to a scholarship fund established in honor of their grandfather, McQuillan and Pernicone are joining an equally distinguished family legacy of giving.

“We have been the beneficiaries of a lot of sacrifice throughout the generations, Carl and I,” says McQuillan. “And today, with the costs of law school, it makes it much more difficult for families to pursue this level of education. It’s really imperative that we help provide some assistance to current and future Fordham Law students and their families. ” 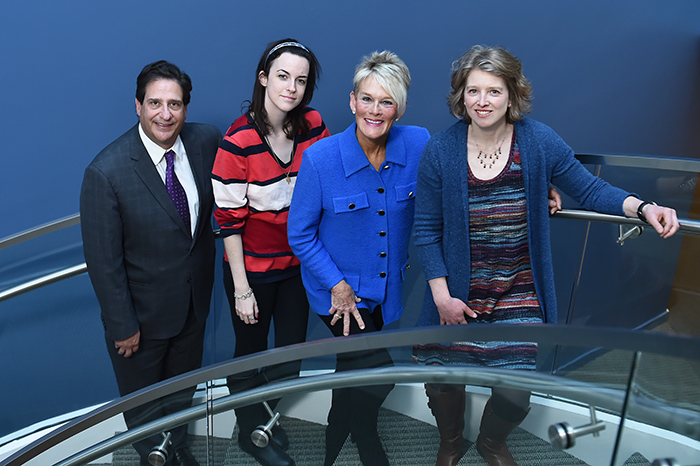 After alumnus Frank Murphy ’75 passed away, his wife, Alice Lehman Murphy, fulfilled one of
his last requests by pledging $2 million to establish an endowed scholarship at Fordham Law.
Here Alice is pictured with Dean Matthew Diller and two Murphy Scholars: Ann Murphy ’18
(not related; second from left) and Carolyn Branch ’19 (far right).