Thomas Schoenherr, founder and assistant dean of Fordham Law’s Public Interest Resource Center (PIRC), has guided Fordham Law students on pro bono and community service work for nearly 30 years. On Jan. 3, the Association of American Law Schools (AALS) Section on Pro Bono and Public Service Opportunities presented him with the Father Robert Drinan Award. The award honors a faculty or staff member at a law school who has advocated the ethic of pro bono service through personal service, program design, and program management. 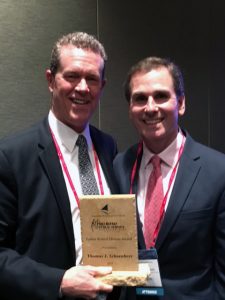 In the late 1980s and early 1990s, Schoenherr said, circumstances coalesced. He joined the National Association for Law Placement (NALP) and met law school professionals engaged with the promotion of law student pro bono work. At that time, only six law schools in the nation housed staffed-programs dedicated to student public service.

At that same time former Dean John D. Feerick ’61 hosted meetings of Fordham Law faculty and administrators to discuss the organization of student pro bono groups. At these meetings, Schoenherr raised the point that the key ingredient for a potential program would be student initiation and leadership of pro bono projects. He concluded that, because students perform service voluntarily, neither for money nor for course credit, their needs and desires must be considered for a potential program’s success.

Feerick tasked Schoenherr with contacting other law schools about their involvements with student pro bono work. He called up his friends from NALP—a collaborative community that, according to Schoenherr, “continues to inspire” him.

After speaking with NALP members and holding on to his idea of student centrality, Schoenherr convinced Feerick to permit the founding of a new program. The Public Interest Resource Center, which opened in 1991, consisted of Schoenherr, who would be named the center’s founding director the following year, a secretary, and three student groups. Channeling the enthusiasm of service-minded individuals, they named the center PIRC. Shortly thereafter, students began to flock to its office.

“If you build it, they will come,” said Schoenherr, echoing the 1989 film Field of Dreams.

Schoenherr himself participates in PIRC’s Habitat for Humanity chapter, which organizes a weeklong alternative spring break service trip each year. “Working shoulder to shoulder with students allows you to get to know them in a different way,” he said. Schoenherr, who has maintained friendships with his fellow Habitat volunteers throughout the years, noted that the group’s work has helped combat the negative stereotypes sometimes attributed to lawyers.

Due to its student-focused nature, PIRC must adapt each year to Fordham Law’s continuously changing student population. “The center’s goal is to make it as easy as possible for all Fordham students to engage in pro bono work that is meaningful to them while they are students,” said Schoenherr. New projects currently in the works focus on legal advocacy on behalf of veterans and artists.

“Our hope is that our students will carry the ethic of service with them into the legal profession in a way that is meaningful to them,” he said.

Witnessing the success of Schoenherr’s brainchild, numerous law schools across the country have formed similar programs. Schoenherr continues to advocate his student-focused model at ABA, AALS, and NALP meetings and beyond.

Given Schoenherr’s substantial impact on Fordham Law and law schools nationally, dozens of Fordham Law School deans, faculty members, students, alumni, and colleagues from across the country were compelled to nominate Schoenherr for the Drinan Award. Michael W. Martin ’92, clinical professor of law and director of clinical programs at Fordham Law, who was a public interest student leader during PIRC’s formative years and is one of Schoenherr’s longtime friends, will present the award. Set to take place in San Diego, the Jan. 3 ceremony will also honor the recipient of the Deborah L. Rhode Award, which recognizes a faculty member or dean who promotes pro bono work in a law school. (Past awardees of the Rhode Award include former Dean John Feerick and current Dean Matthew Diller.)

“This is a touching, humbling, and gratifying honor,” said Schoenherr.