Return to Fordham Law School
You are at:Home»Alumni»Breaking the Ban
“It’s still hard for me to understand why they would consider us a threat to this country. This is truly affecting ordinary people, and it’s not right.”
– Fahimeh (Farimah) Kashkooli LL.M. ’17

“Breaking the Ban: Lawyers as Agents of Change” featured insights from Fahimeh (Farimah) Kashkooli LL.M. ’17, an Iran native whose ailing daughter was directly affected by the president’s first executive order, and a trio of legal practitioners—Mariko Hirose, Camille Mackler, and Lia Minkoff—who participated in mass efforts to aid stranded travelers at John F. Kennedy International Airport in the hours and days after the ban’s sudden announcement on Jan. 27, 2017. 3L Frank Kearl organized the panel. 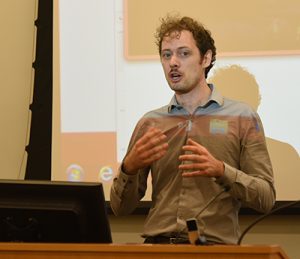 Kashkooli, who spoke via Skype from the country of Georgia, shared an emotional account of how the initial ban, which temporarily barred entrants from seven Muslim majority countries including Iran, delayed her daughter Alma from receiving surgery for glycosylation, or CDG, a rare congenital disorder, which if left untreated could cause blindness. Kashkooli praised the Fordham Law community for its role in helping secure Alma’s admission into the United States on Feb. 6, 2017, so she could receive the medical treatment that stabilized her condition.

This spring, Kashkooli interned with the New York City Supreme Court, and she is now trying to receive the appropriate visa in North America in order to ensure Alma’s future medical care. Her struggle to provide Alma with this care has larger implications beyond their family, Kashkooli noted. Alma’s inability to receive treatment in America—and for doctors, in turn, to uncover valuable knowledge from her treatment —would negatively affect other children around the world diagnosed with CDG, her mother cautioned.

“It’s still hard for me to understand why they would consider us a threat to this country,” Kashkooli said of the Trump administration. “This is truly affecting ordinary people, and it’s not right,” she added.

Trump signed executive order 13769 on Jan. 27, 2017, unleashing chaos and confusion among international travelers arriving at JFK’s Terminal 4. The ban not only temporarily prohibited visitors, like Alma, but it also closed America’s doors to refugees from across the globe.

News of the ban spurred hundreds of lawyers and thousands of protesters to the airport within hours of its announcement. Critics decried the executive order as a “Muslim Ban,” based on the religious makeup of its primary targets and Trump’s stated campaign promise to prohibit Muslims from entering the United States.

Camille Mackler traveled to JFK the morning after Trump signed the order, unsure what she would do once she arrived. The ensuing protest mobilized lawyers, many of whom had no immigration law background, to pitch in whatever way, legal or otherwise, they could, she observed. 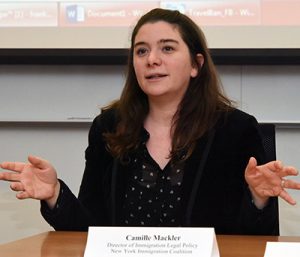 “It was just breathless from Saturday morning to a week and a half later,” recalled Mackler, director of Immigration Legal Policy for the New York Immigration Coalition. The ban’s first battle then concluded in a manner that surprised Mackler. A temporary restraining order went into effect on Feb. 3, and was upheld on Feb. 9 by the U.S. Court of Appeals for the Ninth Circuit.

“Somehow, through it all, we had the lucidity to realize this was our first act in a very, very long battle that we are fighting still, and will be fighting for at least two and a half more years,” said Mackler, explaining that New York lawyers created procedures to respond quickly in the event of future immigration raids and are meeting once per month to share information.

The large collective presence and energy of lawyers and non-lawyers alike made the difference in the first fight for immigrant rights and immigrant communities during the Trump presidency, said Mariko Hirose, a senior staff attorney at the New York Civil Liberties Union, when the president issued his original travel ban. Hirose, a one-time Fordham Law adjunct professor, thanked students in attendance for volunteering to assist her office with client intake forms during the “crazy” first week when her focus shifted from people at the airport to those who had been deported and were seeking re-entry.

Lia Minkoff, a senior staff attorney with LegalHealth, cherished the memory of people outside the airport chanting “Lawyers are our heroes,” and recognized her time spent at the airport, writing press releases and tracking on-the-ground developments, as the “proudest moment of my career.”

“When we’re talking about lawyers as agents of change,” said Minkoff, referencing the event’s title, “in many ways we’re talking about supporting a cause, going to rallies, and educating communities. The law can only go so far. The culture has to catch up and go beyond through education.”

Even after the initial court victory, immigrants and immigration rights lawyers never exhaled, Minkoff informed students. The relentless attacks on immigration law since Trump took office have affected the law, the way lawyers practice, and immigrant communities, she said. 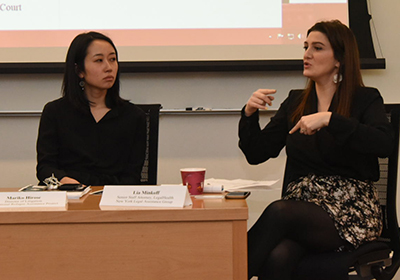 Notably, over the past calendar year, lower court rulings rejecting the ban’s constitutionality have given way to Supreme Court decisions that have upheld all or some of its latter incarnations.

In June 2017, the Supreme Court partially overruled lower courts, allowing the administration’s implementation of its second travel ban while exempting anyone who had a “bona fide relationship” with a person or business in the United States. The nation’s highest court ruled in December that a third executive order—one proposing an indefinite full ban on people from eight countries, including Iran—could go into effect until it had time to further consider the order’s merits.

The Supreme Court’s December ruling has already resulted in “terrible” consequences for people who wanted to visit their families, needed medical assistance, or sought to escape horrific conditions in their home country, lamented Hirose, who now serves as litigation director for the International Refugee Assistance Project (IRAP). Hirose expressed hope that after hearing oral arguments in the matter of Trump v. Hawaii on Wednesday, April 25, the Supreme Court would follow lower courts’ lead in finding the ban unlawful.

Regardless of the Court’s decision, Mackler assured the event’s attendees that tomorrow’s immigration lawyers would not lack for opportunities to make a difference in people’s lives.

“You are all becoming lawyers at an unbelievable moment in this profession,” Mackler declared.

Fostering a diverse and inclusive community and deepening our commitment to service are two of the six objectives of the Law School’s strategic plan, Fordham Law Forward.