Professor Bennett Capers’ expansive intellectual appetite ranges from criminal law to Andy Warhol and the television series The Wire, but at bottom is always personal. “I’ve always been interested in issues of race, gender, and sexuality—really, I’ve always been interested in aspects of my own identity,” says Capers of what drives his scholarship. “[S]peaking about my identities is liberating, a way to write myself into an academy that too often feels like a ‘white space,’ and into a conversation where people like me have long been the object of discussion, but rarely the subjects doing the discussing.”

Professor Youngjae Lee, associate dean for research, spoke with Capers about his scholarship and his recent article, “Afrofuturism, Critical Race Theory, and Policing in the Year 2044.” 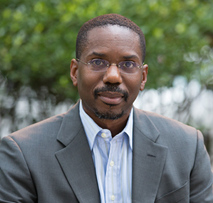 You have been extremely prolific in a variety of topics in criminal law and criminal procedure. Could you say a few words about the projects you choose, the issues you care about, and the scholarly temperament or personality you bring to your projects?

I’ve always been interested in issues of race, gender, and sexuality—really, I’ve always been interested in aspects of my own identity—and luckily I’ve found endless ways to explore how those issues intersect with criminal law/criminal procedure issues, and increasingly with evidence law. But beyond those intersections, I’ve never had a research agenda per se. Because of this, I think of my projects as choosing me rather than vice versa.

That you frame your answer in terms of aspects of your own identity calls to mind a striking feature of your work. You have not been shy in your writings about spelling that thought out explicitly in your scholarship. That is, the scholarship you engage in, while addressed to a broad audience on issues of pressing importance to the public, is very personal to you. In a sense, that is probably true for most scholars, but in your case it is often stated explicitly upfront, which is unusual. What are your thoughts behind that?

When I was in law school, I read Patricia Williams’ book The Alchemy of Race and Rights: Diary of a Law Professor and was hooked from the first line: “Since subject position is everything in my analysis of the law, you deserve to know it’s a bad morning.” That line changed forever how I think about “voice” and “self” in my work, especially as I started to read more critical race theory and its embrace of legal storytelling and voice scholarship, which resonated with me enormously. It’s obvious to me that my views on the law are inseparable from my experiences of the law. I can’t imagine bracketing my experiences as a Black man; similarly, I can’t imagine bracketing my experiences as a federal prosecutor. Both are integral to my take on criminal justice issues. It’s also important to me to make my background explicit in my work. To me, speaking about my identities is liberating, a way to write myself into an academy that too often feels like a “white space,” and into a conversation where people like me have long been the object of discussion, but rarely the subjects doing the discussing.

One of your very first writings was about a painting by Andy Warhol. Do you think you see the world differently from others because of your literature background?

In addition to the essay “On Andy Warhol’s Electric Chair,” I could also add my law-and-literature article “The Trial of Bigger Thomas,” which was an exploration of Richard Wright’s novel Native Son. Or my essay “Reading Back, Reading Black,” which incorporated black literary theory to reread the classic cannibalism case, Regina v. Dudley & Stephens. Or my more recent short essays on the television series The Wire. I’d even add my favorite essay, “Crime Music.” But even in my more traditional scholarship, my interest in literature is there in the voice. For me, the “what to say” is obviously important. But beyond that, I’m constantly searching for “the words to say it,” to repurpose a line from the French poet and critic Nicolas Boileau, but which I first encountered in Toni Morrison’s work of literary criticism Playing in the Dark. My literature background is inextricable from “who I am,” and informs me as much as my background as a federal prosecutor.

That brings us to a recent article of yours, “Afrofuturism, Critical Race Theory, and Policing in the Year 2044,” in which you sketch a picture of what the future may look like in a world where people of color form the majority of the population. One word you use a lot in the article is “imagine.” How are you using that term?

As I make clearer when I present the piece, this is really my vision of a possible Afrofuturist and critical race theory future. The point is that a better world is possible, especially if demographic shifts happen as predicted and are accompanied (eventually) by shifts in economic, political, and social capital power. And if a better world is possible, then now is the time to a) envision what we want that world to look like, and b) map a route there. Especially now, when the present leaves a lot to be desired—I can imagine 2020 easily winning the title for the worst year of our lifetime—imagining a better future can give all of us both hope and something to work for.

The world you imagine in the piece is very specific. There is a robust social welfare state, which eliminates needs to commit crimes; rehabilitation is prioritized and retribution disappears as a reason to punish; and people are not materialistic. Those things would appeal to progressives. But you also talk about universal surveillance that makes undetected criminal activity nearly impossible. Would you really say that that is a better world? The surveillance part sounds more dystopian than utopian.

Yes, it’s a better world, though not utopian. There is still crime, and there is still the need for the police. There is surveillance, though it is “soft” surveillance—unobtrusive, barely noticeable—and is distributed equally, unlike the race-based surveillance that currently exists. There has been decriminalization, but also criminalization of behavior that is not now criminalized. For these and other reasons, I would not categorize it as utopian. I do, however, view this particular future as consistent with a utopian horizon where prisons do not exist because they have become unnecessary, and where surveillance has become unnecessary.