For some legal professionals, one visit to the Supreme Court—and a discussion with a Justice—is considered a crowning achievement of a successful career.

But after bringing his class to meet with Supreme Court Justice Sonya Sotomayor last year, Adjunct Professor Jerry Goldfeder, who teaches an Election Law class every fall at Fordham, decided to make it an annual event. This year, he approached Justice Ruth Bader Ginsburg, commonly known as the Notorious RBG (a play on deceased rapper the Notorious B.I.G.).

“Last year, I arranged the meeting through a mutual friend, but this time, I simply called Justice Ginsburg’s chambers and told them what I had in mind. It was just a question of setting a date,” said Goldfeder. “Meeting a Supreme Court Justice, whether a social media icon like Justice Ginsburg or any of the others, is an awe-inspiring experience for students; after all, most long-time practitioners never have this opportunity.

“My real purpose, however, was for students to come away feeling empowered. Meeting successful people, whether judges, public officials, or other accomplished individuals, can enable a student to imagine his or her own successes—and strive to achieve their secret goals,” said Goldfeder, who was voted Fordham Law’s Adjunct Professor of the Year in 2015.

On Monday, Goldfeder, who has represented elected officials and candidates for public office for more than thirty years, took about 20 Fordham Law students, as well as 10 of his Penn Law students, 250 miles south for a tour of the Capitol building led by a member of Congressman Eliot Engel’s staff, including the Old Supreme Court, which is in the Capitol. Afterward, they spent about an hour with Justice Ginsburg, who posed for photos, spoke for about 15 minutes, and then answered questions ranging from her views on Citizens United to whether her iconic identity as the Notorious RBG has influenced her decision-making. 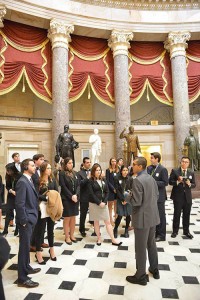 Students in the rotunda of the U.S. Capitol.

One of Goldfeder’s students, Aaron Neishlos ’16, asked the first question about whether or not the Supreme Court should recognize a fundamental right to dignity, in light of Justice Kennedy’s discussion of the dignity of same-sex couples in Obergefell v. Hodges. He then asked the Justice “in what capacity she would like to see the right enacted, if at all.” Much to everyone’s surprise, Justice Ginsburg turned the question right around, asking Neishlos’s own opinion.

“I replied that I think that dignity is intrinsically linked to individuals’ rights to self-determination and principles of autonomy, which I thought were fundamental, but which had not yet been recognized by the Court,” Neishlos said. “Justice Ginsburg then said that she would like to see the right codified through a theory of substantive due process.” Professor Goldfeder said, “We were all very proud of Aaron’s intelligence, poise, and self-confidence.”

In addition to the discussion of dignity, Ginsburg offered the students a bit of extra historical context to Obergefell v. Hodges: a small part of Justice Anthony Kennedy’s decision cited a 1981 case, Kirchberg v. Feenstra, in which the Court struck down Louisiana’s “head and master” law, essentially redefining marriage from a relationship between an owner (the husband) and his property (the wife) to a relationship between equals. “In addition to the precedent set in Lawrence v. Texas and U.S. v. Windsor, the holding in Obergefell was really 40 years in the making,” Justice Ginsburg said.

“In our meetings with Justices Sotomayor and Ginsburg, my students asked substantive questions about campaign finance and marriage equality cases, but they also asked each to reflect on being a woman and how that has affected their careers. Both gave very personal answers,” Goldfeder said. “I think everyone was very moved by the experience.” 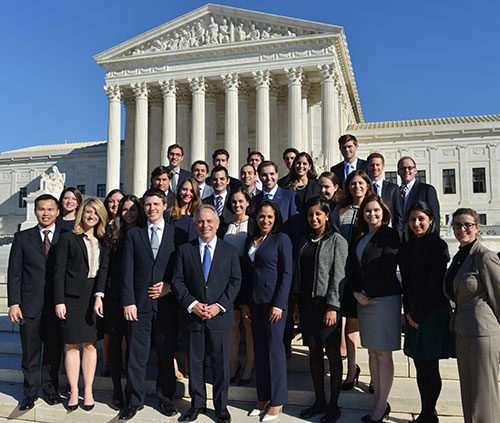 Jerry Goldfeder and students outside the Supreme Court building