Return to Fordham Law School
You are at:Home»Centers and Institutes»Learning Lessons About Wrongful Convictions

When the Brooklyn district attorney publicly states that systemic failures in the justice system are the root cause of wrongful convictions in New York City’s most populous borough, as Kenneth Thompson recently did, then a serious discussion about the miscarriage of justice is needed. That discussion took place at Fordham Law on April 18 during a program titled “Wrongful Convictions: Lessons Learned” co-sponsored by the Stein Center for Law and Ethics and the Center on Race, Law and Justice. The event welcomed five legal professionals who discussed the enduring problem of wrongful convictions and what prosecutors can do to prevent them.

The panel was moderated by Judge Ethan Greenberg of the Bronx Supreme Court, who introduced the complexity of the topic. “It is neither possible nor meaningful to cover this topic in one evening,” he said. He asked the panel to address which kinds of cases are most likely to result in a wrongful conviction. The ensuing conversation ranged from problems with single witness identification, what constitutes Brady disclosure, and prosecutorial discretion.

The speakers began by homing in on the problem of false confessions. Even when the confession seems to be reliable (e.g., it contains detail only the perpetrator could know) the confession may turn out to be false, because the detail was fed to the defendant through leading questions. 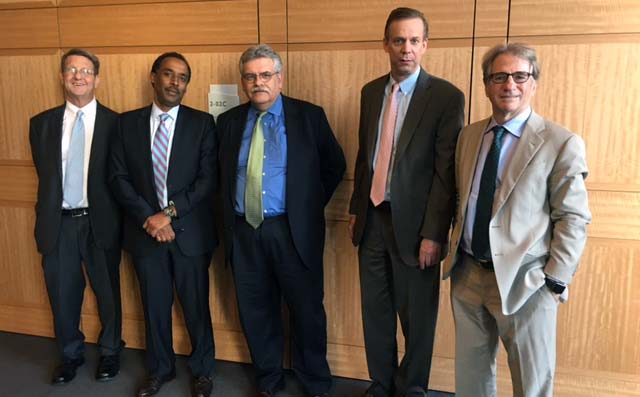 Panelist Barry Scheck, co-director of the Innocence Project, pointed out in the audience Jeffrey Deskovic, a man who served 16 years in prison after being wrongfully convicted in 2006. (Deskovic now runs a foundation that fights wrongful convictions.) Panelists agreed that it was in the best interest of the defendants and the prosecutors for all interactions to be videotaped as soon as suspects are taken into custody.

New York City recently issued body cameras to its police officers. While a step in the right direction, the measure is not enough, according to Scheck.

“New York City has the worst procedures for dealing with eyewitness identification,” he said. “New York is in the Dark Ages for getting eyewitness reform passed.”

In a Q&A following the discussion, panelist Mark Hale, bureau chief of the Brooklyn DA’s Conviction Review Unit, was asked how the general public felt about conviction integrity reforms. “There is broad support for the conviction review process,” he replied. “It speaks to fairness, wherever you are on the political spectrum. The public, and prosecutors, truly want the right result to come out.”

While the event highlighted many of the legal system’s flaws, it also underscored how procedures are slowly but surely improving to overturn and prevent wrongful convictions at every level. “We have so many ways now to corroborate or contradict eyewitness testimony,” said William Darrow, bureau chief of the Manhattan DA’s Conviction Integrity Unit. For example, data from cell phones can often be used to prove or disprove whether the suspect was in the area where the crime occurred.

Dean Matthew Diller welcomed the panel, which consisted of Darrow, Greenberg, Scheck, Hale, and Earl Ward, partner at Emery Celli Brinckerhoff and Abady and chair of the Bronx Defenders board of directors.

“Your work is critical to the legal system, and our lives as a whole,” Dean Diller said to the panelists. “It has profound implications on how we go about trying and convicting criminals.”