Return to Fordham Law School
You are at:Home»Centers and Institutes»Fordham Law Launches Access to Justice Initiative

“Through this initiative, Fordham Law School will focus the collective energy of our community on helping to close the justice gap—the large holes in our system of access.”
–Dean Matthew Diller

Conceived by Dean Matthew Diller, the Access to Justice Initiative will harness the many resources of the Law School—the work of its centers and institutes, the research of Fordham Law faculty, the scholarship of its student journals, the expertise and leadership of Judge Lippman, and the data-driven insights of National Center for Access to Justice Executive Director David Udell’s Justice Index—to promote greater access to justice at local, state, and national levels. Diller, Lippman, and Udell, the initiative’s three co-chairs, recently penned a National Law Journal editorial outlining why access to justice has earned a place at the center of legal education.

“Through this initiative, Fordham Law School will focus the collective energy of our community on helping to close the justice gap—the large holes in our system of access,” Diller said during his remarks, noting these issues have been “very important” to him throughout his 30-year career and remain a source of daily reflection for him as law school dean. “Through our teaching, our faculty’s research and scholarship, the work of our clinics, our student journals, and our student volunteer organizations, our community will make access to justice a central priority. Our intellectual energy and expertise can generate ideas and solutions and our passion for service can help individuals in need and service providers.” 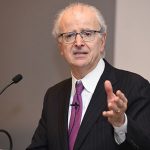 The dean explained that, in NCAJ’s Justice Index, access to justice is defined as the opportunity for people and groups to learn about and protect their rights via a neutral, nondiscriminatory process that determines facts, applies the fair rule of law, and enforces the result. This is important to everyone in our society, and particularly important for vulnerable groups, such as non-English speakers or people with disabilities. The Justice Index tracks state’s efforts to establish polices and practices that make justice accessible to all. 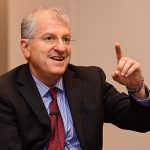 The crisis in access to justice became particularly acute following the 2008 economic collapse when millions of people were left with little means to protect and enforce their rights, leading to surges in eviction, foreclosures, and family law disputes at the same time that budget cuts befell legal services providers and court systems. More recently, the Department of Justice’s report on racially discriminatory policing practices in Ferguson, Missouri, and a string of high-profile police-civilian shootings involving unarmed African-American men and women have prompted protests about the role of the justice system in communities of color.

Judges across the country have realized over the past decade how civil and criminal matters intertwine, and there is a growing consensus that measures must be taken to close the gap between finite legal services and the urgent need of these services for the poor to protect their families, homes, and physical safety, Judge Lippman said during his keynote speech. While the U.S. Supreme Court’s ruling more than 50 years ago in Gideon v. Wainwright guaranteed the right to criminal defense counsel, the intervening years have shown that neither Gideon in the criminal justice system, nor even a matching right to counsel in the civil justice system if one can be established, will be enough to ensure equal justice.

“We know that what we need today is an access to justice revolution that fosters leadership, innovation, and partnerships in the cause of equal justice so that justice in criminal and civil matters is not determined by the amount of money in your pocket,” Lippman said, adding that this revolution is already being sparked through systemic reforms occurring across the nation and that the leadership of the courts on access to justice is needed to improve the criminal justice system in addition to the civil justice system. During his tenure as chief judge from 2009 to 2015, Lippman instituted programs that increased funding for civil legal services, established a mandatory 50-hour pro bono requirement for law students, and created what is now known as the Permanent Access to Justice Commission, among numerous other notable achievements.

The panelists discussed the trend in many communities to use civil fines and fees as a means of extracting money for government services from their poorest residents, observing that these costs originate in the American experience with slavery and indentured servitude. Fees and fines, often imposed many at a time, snowball into criminal charges when not promptly paid and cause many people to be incarcerated. Additionally, once in jail, those incarcerated often lack the money to post bond. The panel’s judges noted that bail reform is often impeded by the lobbying efforts of the bail bonds industry, which pushes for higher bail and urges the retention of cash bail systems, despite studies showings that bail does little to deter crime.

In Florida, $1 billion collected in court fees and fines goes toward the state’s general fund, Chief Judge Labarga said. Legislatures once viewed these monetary penalties as a remedy to crime but now are “abandoning them because they’re just not working,” Judge Labarga added.

In New Jersey, a 33-member panel found that the state’s jails were comprised of a large number of people too poor to make bail. As a result, the state will transition in the next 10 weeks to a system that appraises an inmate’s risk of flight rather than one designed to receive money back, Chief Judge Ratner said, noting the overall population of inmates, as well as inmates of color specifically, is expected to decline.

“The fact we’re seeing bail reform going forward, despite very intense resistance, is one of the positive things we can note is happening in New Jersey and also being pursued in Texas and other jurisdictions,” Udell said. He also praised Wallace’s suggestion that chief justices across the country issue a set of principles for the state court judiciary to embrace in leading criminal justice reform, an idea modeled on a similar set of principles that the state courts have adopted on the civil side.

In many jurisdictions, the judicial branch receives revenues from fines, which Judge Lippman explained creates a problematic situation for the judiciary. “You can’t open access to justice with one hand and close it with the other,” Lippman said, adding that providing legal representation is best for society’s bottom line and is also the right thing to do.