Return to Fordham Law School
You are at:Home»Fordham Lawyer»Features»We the People…

…of Fordham Law School, in Order to Form a More Perfect Narrative, Do Ordain and Establish This Story of the 25th Amendment of the Constitution of the United States of America

In October 1963, a recent Fordham Law graduate published an article in the Fordham Law Review on the “esoteric” topic of presidential succession. Arguing that an “able, healthy, and young” President John F. Kennedy had made the time ripe for the issue’s discussion, the article advocated for the adoption of a constitutional amendment to resolve the ambiguities and gaps in the Constitution’s original succession provision that had been exposed in past cases where presidents were unable to fulfill their duties.

With a tenacity that has come to characterize every aspect of his career, the article’s author, future Fordham Law School Dean John Feerick ’61, mailed the published work to everyone he felt might have an interest, including President Kennedy, Attorney General Robert Kennedy, congressmen, and retired government officials, including former Vice President Richard Nixon. 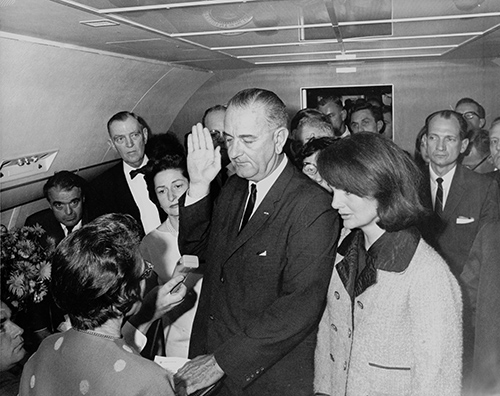 Lyndon B. Johnson taking the oath of office on Air Force One following the
assassination of John F. Kennedy, Dallas, Texas.

“I was engaged as a citizen, and as a young person I thought anything was possible,” said Feerick. “We were inspired by President Kennedy, this very young president who said, ‘Ask what you can do for your country.’ So that became my mantra.”

Less than a month after the publication of Feerick’s article, Kennedy’s assassination seared the issue of presidential succession into the public consciousness. The American Bar Association soon called on Feerick to join a team tasked with developing proposals to address the issue.

Congress drew heavily on the ABA commission’s recommendations for a constitutional amendment. Additionally, Feerick personally assisted lawmakers, including representatives Emanuel Celler and Richard Poff, and Indiana Sen. Birch Bayh, the leader of the effort to shore up the Constitution’s presidential disability and succession provisions.

On July 6, 1965, Congress gave final approval to the proposed 25th Amendment to the Constitution; less than two years later, on February 10, 1967, the amendment was ratified and became part of the Constitution. Thirteen days later, President Lyndon B. Johnson held a ceremony at the White House to formally proclaim the adoption of the amendment, and Feerick was among the amendment’s architects present at the ceremony.

In the 50 years since the amendment’s ratification, Feerick has been committed to promoting appropriate uses of it and calling for further reforms to the presidential succession system, and he’s had some help along the way—from Fordham Law students. In 2010, at the suggestion of former Dean William Treanor, Feerick launched the Presidential Succession Clinic to get students involved in the project on which he has made a national impact. 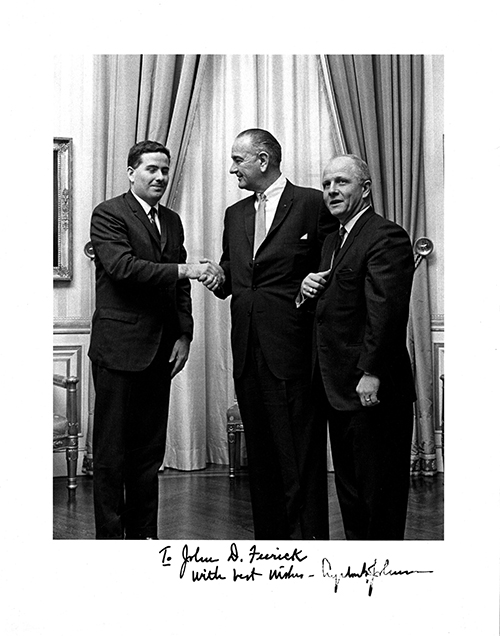 John Feerick with President Lyndon B. Johnson and Representative Richard Poff at the White House in 1967.

During the inaugural year of the clinic, Feerick, with the help of co-teachers Dora Galacatos and Nicole Gordon, guided nine students through thorny gaps and ambiguities that still exist in the procedures for handling presidential, and vice presidential, deaths and disabilities. While Fordham Law clinics typically involve representing people embroiled in cases, Feerick saw his clinic students gaining lawyering experience while serving a different type of client.

“We didn’t have any clients in terms of an individual; our client was the constitutional system,” he said.

The recommendations that that first clinic ultimately devised were published in Volume 81 of the Fordham Law Review, and distributed to officials in the White House and every member of Congress.

This past academic year, as the amendment reached the 50th anniversary of its ratification, Feerick reestablished the presidential succession clinic. He—and Adjunct Professor John Rogan, who co-teaches the clinic with Feerick—felt that the amendment continued to offer fertile intellectual ground for Fordham students.

“The history of the 25th Amendment is fascinating—and ongoing,” said Rogan. “An unsettling number of presidents have either died in office or become seriously impaired, on a couple of occasions leaving the country essentially leaderless for extended amounts of time. When you combine that history with the fact that there are still some problems with the succession procedures—that similar incidents could still happen—it’s hard not to find these issues engaging.”

Students in the second iteration of the Presidential Succession Clinic have enjoyed a great trove of resources. In addition to Feerick’s five decades of experience, the class has benefited from the counsel of distinguished guest speakers such as Hon. Robert Katzmann, chief judge of the U.S. Court of Appeals for the Second Circuit; Fred Fielding, former White House counsel to Presidents Ronald Reagan and George W. Bush; and Bernard Nussbaum, White House counsel to President William Clinton. One of the last guests during the fall semester was then-CIA Director (and Fordham University alumnus) John Brennan, who discussed possible national security issues that might arise in a case of presidential incapacity. (The Law School’s Maloney Library has also created an online archive of 25th Amendment material, including Feerick’s scholarship and historic documents.)

“Because Fordham is directly linked with the 25th Amendment, the guests stressed for us the unique opportunity we have in studying it here,” said clinic student Jonathan Coppola ’17. “You have Dean Feerick’s work with it, the clinics we’ve done in the past, and the guests who come to talk to us.”

Students in the clinic spent the fall semester focusing on a number of issues that could still arise in a case of presidential incapacity. They interviewed sources and reviewed scholarship in attempts to formulate contingency plans for circumstances such as the incapacity of a vice president alone, and a situation where Congress needs to evaluate the president’s fitness to govern. They also contributed scholarship to the debate concerning who should be included in the presidential line of succession. Like the work of the original Presidential Succession Clinic, these recommendations will be collected, published, and distributed to lawmakers and other government officials.

Though in the fall semester the clinic fulfilled much of its primary research, Feerick and Rogan felt that contemporary politics had provided reason for a continuation of its work.

“We thought that, in the recent election campaign, all kinds of issues were raised about the health of candidates, and the questions of party rules,” said Feerick. “We felt those things leant themselves to further clinical work.”

The spring semester of the Presidential Succession Clinic addressed a set of problems that might arise if a nominee for the presidency fell ill prior to or immediately after the election. The clinic also looked at issues relating to disclosure of presidential candidates’ health records. The clinic worked to formulate recommendations on both issues.

When the work of this year’s clinic is added to the already robust body of scholarship released by Fordham concerning presidential succession, it will signal to legislators the extensive experience the School has with the issue.