Return to Fordham Law School
You are at:Home»Awards»Supreme Court Justice Anthony M. Kennedy Receives Fordham-Stein Prize
Congratulations to you—the alumni, the faculty, and the students for your dynamic commitment to preserving the tradition and the mission and the meaning of the law.
– Anthony Kennedy

Supreme Court Justice Anthony Kennedy sounded a cautionary note about the Internet last night upon accepting the Fordham-Stein Prize, awarded annually to an individual whose work embodies the highest standards of the legal profession.

“The cyber age is changing not only our technical world but how we think about who we are. And we’re not sure where this revolution is going,” he said. “We must be careful not to allow this revolution to become known as the bypass age.

“We can’t allow the Internet to bypass the concept of who we are, what our heritage is, and what our destiny is. And that destiny and that heritage are to preserve and transmit freedom to the next generation.”

Justice Kennedy also spoke about the discrete characteristics—“the intangibles”—that make a law school great and how Fordham fits those criteria.

Before presenting Justice Kennedy with the award, Dean Matthew Diller spoke about the justice’s celebrated history of opinions, which according to the dean have long resisted procrustean categories.

“Pundits and media types have tried for decades to pin ideological labels on Justice Kennedy. But his thoughtful, nuanced jurisprudence eludes facile designations,” Dean Diller said. “In perusing some of the many majority opinions he has written, one realizes that he cannot be tied to reductive political descriptions of right or left, conservative or liberal, radical or traditional. Justice Kennedy views his mission as nothing more and nothing less than embracing the values of our Constitution and its promise of liberty and justice for all.” 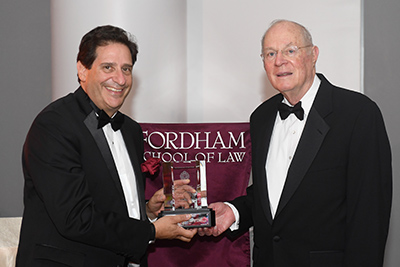 Justice Kennedy is the eighth member of the Supreme Court to receive the Fordham-Stein Prize. Other Supreme Court awardees have included Ruth Bader Ginsburg, William H. Rehnquist, and Sandra Day O’Connor. Justice Kennedy was nominated to the Court by President Ronald Reagan and confirmed in 1988. Prior to his Supreme Court tenure, he served as a judge in the Court of Appeals for the Ninth Circuit. At the time of his appointment to that court, he was the youngest appellate judge in the United States and the third youngest in history to be appointed to a federal appellate bench.