For better or worse, hedge fund activism has created a new landscape for corporate governance. After an activist fund identifies an underperforming firm, it asks for representation on the firm’s board to enact its business model. If the firm pushes back, the activist fund threatens a proxy fight to secure its representation. In theory, this dynamic should promote shareholder democracy.

But things do not actually work that way, explained John C. Coffee Jr. during the 18th Annual A.A. Sommer, Jr. Lecture on Corporate, Securities and Financial Law, “The Agency Costs of Activism,” on November 8 at Fordham Law. The lecture was sponsored by Morgan, Lewis & Bockius LLP, the SEC Historical Society, and the Fordham Corporate Law Center. 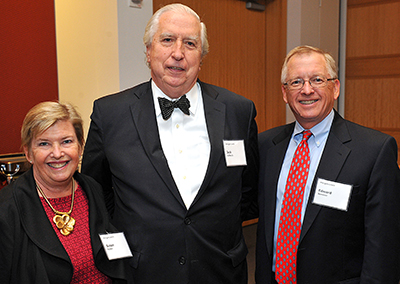 “Backroom political deals are replacing shareholder elections, and the result is the opposite of democratic,” said Coffee, who holds the Adolf A. Berle Professor of Law and is director of the Center on Corporate Governance at Columbia Law School. He cited a 2016 study that revealed 131 of 149 activist-initiated campaigns for board representation successfully secured board seats. According to the study, 95 percent of those seats resulted from private settlement negotiations. Because firm managements know that lost proxy fights likely result in the forced departure of their CEOs, he explained, they usually submit to high activist board representation.

The event featured welcoming remarks from Matthew Diller, Dean and Paul Fuller Professor of Fordham Law. “Business law is really a core strength of Fordham Law School and lies at the heart of what we do,” he said.

Introducing the lecture was Ben A. Indek, partner at Morgan, Lewis & Bockius LLP. Indek recounted the accomplishments of the late A.A. Sommer Jr., and he welcomed Sommer’s family members, who were in the audience. Speaking of Sommer, Indek remarked, “Al would have taken great scholarly interest in hearing Professor Coffee talk about the rise of hedge fund activism and the potential costs to public company shareholders.”

The released information may be exploited, according to Coffee, by the fund, its directors, its employees, or its “wolf pack”—a term that refers to the fund’s broader network allies. Even if only negligence in the handling of confidential information explains this pattern, shareholders still suffer an agency cost.

“We find that the cases most characterized by information leakage and by widened spreads are concentrated within those cases with relatively weak controls over information sharing,” Coffee explained. He added a hypothesis: “The access to material nonpublic information through the medium of a fund-nominated director who is also a hedge fund employee may be the social glue that holds together the wolf-pack network.”

Coffee concluded that although activism has many causes, “a perverse subsidy is today inflating its impact.” He proposed that, in the future, the definition of “group” ought to be expanded to include wolf-pack members. He also recommended permanent shareholders adopting a bylaw that gives them veto power over board size expansion and vacancy appointments.

Coffee said his team does not intend to point fingers and persecute anyone. Instead, they aim to support defense counsels of targeted firms.

“My hope is that I can embarrass hedge funds to stop appointing their own people,” said Coffee.