Return to Fordham Law School
You are at:Home»Centers and Institutes»A Decade of Debt

To address the growing problem of consumer debt, hundreds of advocates—the majority of them attorneys—gathered at Fordham Law School on June 12 to attend the conference “Consumer Debt in NY, #10YearsAfter: Crisis, Progress and the Work Ahead.”

The conference marked the tenth anniversary of a watershed gathering at the Law School in 2008 that educated stakeholders on the systemic problems and inequities at the time and helped usher in a new generation of consumer-reform advocates.

The speakers on Tuesday included legal leaders in the field as well as Jessica Silver Greenberg, a Pulitzer Prize-nominated reporter at The New York Times who writes about finance and its impact on consumers, businesses, and the legal system.

“I chose to speak because I think it’s a vitally important dialogue to be discussing,” she said after the conference. “The civil courts are a vital part of the justice system, and when they are co-opted by businesses they cease to serve that function.”

“We need a consumer protection agency that will do things seriously. There has been an erosion of public agencies, especially at the federal level, that are supposed to protect consumers,” said Bland. “The Consumer Protection Financial Act was really getting somewhere since it was passed in 2010, but then the 2018 election happened.”

He added, “There are important things happening in the shadows that we don’t see because we’re distracted by headlines about things like Stormy Daniels.”

According to Bland, the public is being distracted from pressing and unnerving policy decisions, including a freeze on new enforcement actions against bank officials accused of illegalities, the rollback of regulation for student loans and for-profit colleges, and the weakening of the oversite of payday lenders.

Bland encouraged the many attorneys in the audience who do pro bono work with debt-laden clients.

“Does volunteering matter? Yes—it really matters,” Bland said. “This is work with enormous dignity. State agencies and cities are now stepping in for the federal government to protect consumers. There is more important work being done by consumer advocates in New York than in any other state of the country.”

In breakout sessions following the keynote, attendees tackled an array of issues from the macro (bolstering legislation to protect consumers) to the micro (handling robocalls from dept collectors). Topics included fraud in car loans, the link between economic abuse and domestic violence, immigrant rights and consumer debt issues, and student loans.

A session on the tactics of debt collectors, co-chaired by Carolyn. E. Coffey, the director of litigation for economic justice for the nonprofit group Mobilization for Justice, offered practical tips on how to help clients get organized and understand their debt, as well as advocacy for national legislation to curtail abuses by debt collectors, such as robocalls, emails, and what one panel member called “sleazy litigation tactics.”

“I helped organize the original consumer debt working conference ten years ago,” Coffey explained after the breakout session ended. “That was the first time we turned the spotlight on this crisis that hits low-income communities the hardest and floods NYC Civil Court with lawsuits against them.”

In a breakout group addressing the risks and pitfalls of debt settlement, alumnus Andrew G. Pizor ’95, a staff attorney at the National Consumer Law Center, urged fellow lawyers, “Don’t hesitate to report lawyers working for debt settlement firms to the bar [for wrongdoing].” Reflecting on his days as a law student at Fordham Law, Pizor credited professors James A. Cohen and Ian Weinstein with helping him hone his litigation skills in a clinic that turned scholarship into practice. “What I learned from them was tremendously helpful,” he said. 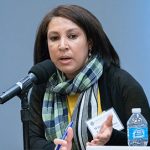 Wilma Tamayo-Abreu of the Feerick Center

Dora Galacatos ’96, the executive director of the Feerick Center for Social Justice, one of the many organizers of the event, said she is deeply grateful to the “dedicated and inspired planning committee and to all involved in helping to organize this event. As a city and state, we have made progress in the consumer debt collection arena in the last decade, but we have much further to go.”

Another co-sponsor of the event was the A2J Initiative at Fordham Law. The A2J Initiative focuses the collective public service energy of the School to deliver on the promise of equal justice, which lies at the core of our concerns as a service-oriented institution and is the foundational bedrock of our constitutional society, through teaching, direct service, and scholarship, research and advocacy.