Return to Fordham Law School
You are at:Home»Business and Financial Law»Insider Trading: Not a Victimless Crime
“$46,000 at 29 years old was the price of professional suicide.”
– Tom Hardin

A former hedge fund analyst who became one of the most prolific confidential informants in securities fraud history detailed his transformation into “Tipper X” during a presentation at Fordham Law on Oct. 15.

Between 2008 and 2009, Tom Hardin’s cooperation with the FBI—both in sharing his knowledge of insider trading in the hedge fund industry and his willingness to wear a wire to record incriminating conversations—resulted in 20 of the 80 securities fraud arrests that occurred as part of Operation Perfect Hedge, the largest insider-trading investigation of a generation. Notably, the operation resulted in an 11-year prison sentence for former Galleon CEO Raj Rajaratnam, a billionaire who utilized insider knowledge to rake in millions in profits.

Hardin was arrested in 2008 for four illegal trades he made a year prior that netted his hedge fund $1.2 million, or roughly a 1 percent profit increase for his firm. He pleaded guilty in December 2009 after teaming with federal authorities for two years. Thanks to his extraordinary cooperation with investigators, he received no jail time when he was sentenced in 2015. He does, however, remain branded a convicted felon.

“$46,000 at 29 years old was the price of professional suicide,” Hardin said, emphasizing the miniscule cut from the illicit insider trades he made. He justified his securities fraud at the time by rationalizing that everyone was doing it and telling himself that his was essentially a victimless crime. “We’re all a few small decisions from going down our own slippery slope,” he warned before outlining his case’s evolution during Behind the Crime: The Inside Story of Tipper X. 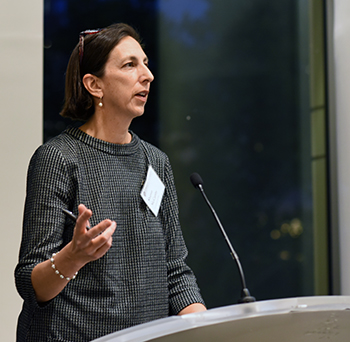 Insider trading is not explicitly defined in securities law; rather, it is something developed in common law interpretations of Section 10B of the Securities Exchange Act of 1934. Insider trading is considered a deceptive device, in accordance with these Securities Exchange Act interpretations, which generally include using material non-public information to trade securities on behalf of oneself or another or to communicate this information to others, tipping off someone else to material they then use to trade with, explained alumna Sharon L. McCarthy ’89, a partner at Kostelanetz & Fink who represents individuals and corporations in white-collar matters. McCarthy introduced Hardin’s presentation and served as an interviewer in a one-on-one conversation afterward. Fordham Law Senior Director of Compliance Programs Alice BrightSky provided welcoming remarks.

In March 2007, Hardin received information from a stock trader named Roomy Khan, whom he had previously done business with, that Kronos, a tech stock, was going to be acquired on a specific date the following week at a specific price by a specific equity firm. Hardin didn’t make any trades involving Kronos that date, but he did tell a friend at a proprietary trading firm about the tip he received. The friend relayed this information to the person sitting next to him, Zvi Goffer, who then purchased hundreds of thousands of shares of Kronos. Goffer was later sentenced to 10 years in prison for conspiracy and securities fraud.

The next day, Hardin purchased a 0.9 percent position in Kronos—the maximum a junior partner could initiate in a stock before talking to a senior partner.

“To commit securities fraud, it didn’t take a master-criminal, Bernie Madoff-type mind,” Hardin said. To avoid such pitfalls, organizations need to be aware of the dangers of isolated decision-making and the importance of professional mentorship and compliance involvement in performance management systems, he noted.

In July 2008, more than a year after Hardin spoke with Khan, the FBI approached Hardin. They had their first conversation at a Wendy’s in Manhattan, at 55th Street and 8th Avenue. Hardin spoke without a lawyer present, an uncommon dynamic that continued throughout his time as an informant. The operation’s first arrests happened in October 2009, and then two months later Hardin pleaded guilty to securities fraud.

The ordeal debunked many of the lies Hardin once told himself, not least of which is that insider trading is a victimless crime. Hardin’s former business associates, most of whom won’t speak to him anymore, faced tremendous scrutiny from federal authorities, as well as their internal compliance departments about their work activities once his name was made public. His wife, who works in hotel management, also faced scrutiny merely because of her last name.

To this date, Hardin’s felony conviction has limited his career opportunities and also prevented the father of two young girls, ages 9 and 7, from coaching youth soccer.

“The biggest victims were my family,” Hardin said.

Behind the Crime was presented by Fordham Compliance Programs, Fordham’s Corporate Law Center, and Stone Turn.