Return to Fordham Law School
You are at:Home»Centers and Institutes»Wither the Creative City?

Over the past few decades, gentrification in the New York metropolitan area has accelerated rapidly, pushing out working-class residents, storied institutions, and struggling artists from the neighborhoods they had called home. Contrary to popular belief, when the process of gentrification begins, “artists are often the first to be pushed out,” said David Goodwin, author of Left Bank of the Hudson: Jersey City and the Artists of 111 1st Street, which sheds light on one particularly fascinating group of such artists.

company warehouse in Jersey City into a studio complex, and consequently, a locus for a burgeoning local art scene. But due to rising real estate prices and hostile political forces, the community of artists was driven out, and the building was demolished in 2007.

Goodwin’s book, published by Fordham University Press in 2017, is just one facet of a growing movement in popular media that examines gentrification with a shrewd and critical eye. “When I began writing this book, topics of gentrification and displacement were largely the bailiwick of academics and maybe some left-wing activists and politicians,” said Goodwin, who is also the head of circulation & access at the Law School’s Maloney Library. “Now it’s in the current public discourse.”

Joining Goodwin at the October 23 event, which was the latest installment in the library’s Behind the Book Series, were Patrick Verel, author of Graffiti Murals: Exploring the Impacts of Street Art and assistant editor in Fordham University’s office of marketing and communications, and Geeta Tewari ’05, associate director of the Urban Law Center, who served as moderator for the event. The Behind the Book Series brings together scholars to discuss their research on contemporary issues and the publishing experience. 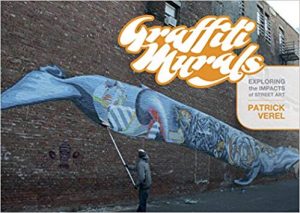 Verel’s book argues that city resources should be devoted to creating murals in order to create a more visually appealing place to live rather than spending money exclusively to eliminate illegal graffiti. During the event, he also talked about the topic of gentrification.

“Gentrification is not the problem, displacement is,” Verel said. Indeed, gentrification often results in safer neighborhoods and better schools in the long run—but at the cost of driving out a neighborhood’s poorest residents who then cannot take advantage of these gains.

When asked by Tewari if the artistic community should push back against the displacement caused by gentrification, both speakers answered in the affirmative, but expressed skepticism as the effectiveness of these efforts.

“The artists featured in my book lost, and they lost big,” Goodwin noted.

It is not hard to imagine similar end results for artists across the New York metro area when faced with developer-friendly new zoning laws and skyrocketing real estate prices. There is only so much a group of artists with relatively little political power can do against the machine of city government or the deep pockets of foreign oligarchs who pump money into a neighborhood.

The speakers nevertheless ended on a positive note, stressing the importance of social justice issues in the genesis of each of their works, and how, as displacement resulting from gentrification becomes more of a mainstream issue, workable solutions may be more readily found.

Goodwin, who earned an M.A. from Fordham’s Urban Studies program alongside Verel, noted, “the Jesuit ethos of social activism, social justice, and a devotion to liberal arts has definitely shaped my thinking and my writing.”

Wednesday’s event was co-sponsored by the Urban Law Center and Fordham University Press.