Return to Fordham Law School
You are at:Home»Law School News»Robert Chislett, From The Army To The Classroom

Robert Chislett ’21 had an eventful first year at Fordham Law. While attending the School’s evening program, he received an honorable mention for the Peter Fugiel Scholarship, co-founded a tech start-up, and has recently been appointed to become the next president of the Fordham Information Law Society. All of this while working a full-time job and becoming a parent for the first time. 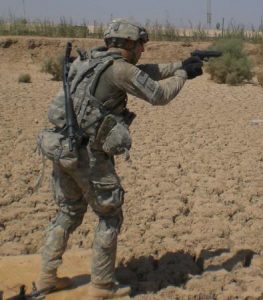 Born in 1982 in New Jersey, Chislett served in the U.S. Army for a decade before enrolling in Fordham Law. During his active duty service as an infantry non-commissioned officer, he was deployed twice in Iraq, and earned awards for combat, valor, merit, and good conduct; he also traveled to 40 countries, mainly in Europe, the Middle East, and South America. He is a graduate of the U.S. Army Ranger School and the Airborne School.

While he was stationed in a U.S. base near Venice, Italy, he began pursuing an associate degree through the education center of the base.

“My very first class was a criminal law class,” he recalls. “The professor had a law degree and practiced law. When I read my first court case, the language stood out to me, and I thought: ‘This is where I want to go.’”

He completed the degree, pursued a bachelor’s, and moved to Brooklyn, NY, where he took an administrative position with the military. In 2016, he enrolled in New York University’s M.P.A. program in Public & Nonprofit Management & Policy as a part-time student.

“I was still working in the military,” he says. “I’d take off my camouflage, put on my jeans, and take the train to school.”

At NYU, he focused on international development. “Much of the lectures were about the economics, finance, and structures of innovation that create social impact and address issues such as poverty, or inadequate human rights,” he explains. During the program, he worked on a project with the United Nations Development Programme in Swaziland.

“The program was a great bridge into law studies, and it gave me new knowledge of the economic and financial policies that can be implemented, in the U.S. or other countries.”

Together with a fellow combat veteran, he also co-founded a start-up company called X-Urb, a tech platform that provides information services to promote food equity and security. Chislett is personally managing the company’s trademark, copyright, and LLC legal filing.

But law turned out to be Chislett’s ultimate aspiration. So he joined the evening program at Fordham Law in the fall of 2018, one year after separating from the military.

The day before Chislett started at Fordham, his wife, Raigan, gave birth to their daughter, Scarlett Siena. Within hours, he’d become both a father and a law student, while working full time as a program fellow at the Volcker Alliance.

His research at the Volcker Alliance ultimately contributed to a report on state budgeting published in December of 2018. For that report, Chislett was awarded by the National Federation of Municipal Analysts (NFMA) with an honorable mention in the 2018 Peter Fugiel Scholarship. Every year, the NFMA awards students who pursue research in municipal administration.

“Being a lawyer means using your skillset to think differently and see issues that others may not see,” Chislett says.

“When I grew up, there were people who helped me and my family. Doing pro bono work feels like paying back,” he says. “It’s rewarding to give other people guidance and help, so that they don’t get taken advantage of.”

Chislett was also recently named president of the Fordham Information Law Society. He has declared Intellectual Property and Information Law as his concentration. This coming fall, he will transition into the full-time program, so that he can fully focus on his studies; he says he is looking forward to taking Prof. Olivier Sylvain’s course on Information Law and Prof. Shlomit Yanisky-Ravid’s course on artificial intelligence and blockchain.

“Leaving the military and establishing a new career is a very challenging process,” Chislett says. “I see my law degree as providing a path for me to create a new career that can be as rewarding as my military career.”