Return to Fordham Law School
You are at:Home»Fordham Lawyer»Features»Elisa D’Amico ’06: Fighting to Protect Sexual Privacy Online, in a Share-and-Share-Alike Culture 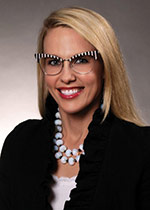 “These days, whether we like it or not, we are what our digital footprint says we are,” says D’Amico, 38, co-founder of the Cyber Civil Rights Legal Project (CCRLP) at K&L Gates, which aims to help NCP victims reclaim their identities and their lives by providing pro bono legal help. D’Amico views NCP as a violation of an individual’s sexual privacy and their cyber civil rights, and thus founded the CCRLP as a civil rights pro bono project; the assessment of whether the CCRLP can help a particular individual does not include an analysis of financial capabilities. That’s important, since being able to take action fast is crucial. “Once something gets out there on the internet, it multiplies so quickly that it can have a huge and negative impact,” says D’Amico. “That’s why sexual privacy warrants a different level of protection.”

Roughly 12.8 percent of people say someone has either threatened to post or has posted their private, explicit images or video without permission, according to a 2017 survey of more than 3,000 adults by the Cyber Civil Rights Initiative. Women who use social media are 1.5 times as likely to be victims as men. People in the LGBTQ community are even more vulnerable: A 2016 report by the Data & Society Research Institute and Center for Innovative Public Health Research found that 15 percent say they’ve received these kinds of threats.

D’Amico was drawn into this work in the summer of 2014 at a program hosted by the Miami-Dade chapter of the Florida Association for Women Lawyers (MDFAWL). There, she learned about the organization’s efforts to help convince the Florida legislature to pass a law criminalizing NCP. Ultimately, the push worked; Florida was the 16th state to pass a criminal NCP law. But back then, D’Amico was struck by the fact that K&L Gates was uniquely positioned to help victims identify perpetrators and hold them responsible, since the law firm employs forensic technologists and other cyber law experts. This inspired D’Amico and her Seattle-based law partner David Bateman to spearhead the CCRLP, so the firm’s partners and associates could have their lawyers use their legal acumen to assist victims, pro bono. “Although I was born and raised in New York and thus have incredibly thick skin, the nature of the work is sometimes absolutely horrifying,” says D’Amico. “Even though I am very much desensitized, I am in fact an extremely emotional person. At times, dealing with the most awful, dark, disgusting people you could ever imagine really gets to me. Sometimes, I just need to leave the office, put down my electronics, and hug my kids.”

Roughly 12.8 percent of people say someone has either threatened to post or has posted their private, explicit images or video without permission.

The good news is that it’s often unnecessary to take these cases to court. “Since the inception of the CCRLP in fall 2014, the number-one goal individuals have is to get the offending material offline,” D’Amico explains. Often, that can be accomplished through a cease and desist letter to a known perpetrator. Even more satisfying is when D’Amico can prevent the material from being posted in the first place, which occurs in the space after a threat to post or share has been made but before it is carried out. According to D’Amico, “revenge porn” is a misnomer because the majority of perpetrators (79 percent) do not actually intend to hurt the person. And many aggressors, she explains, are young and uninformed. Once they learn they can be hauled into court, they often relinquish their threats and don’t post. “I call that my sweet spot,” says D’Amico.

Yet challenges remain. “Technology changes so quickly and the law is perpetually playing catch-up.” Before 2013, only three states had criminal laws directly applicable to nonconsensual pornography. Currently, 44 states plus Washington, D.C., do. Given that legal standards vary by state, jurisdictional issues can make criminal prosecution challenging. “It’s like a game of ping-pong, where individuals are flung from one law enforcement office to another in their quest to find someone willing to take action,” says D’Amico.

A unique position to help

It’s clear that D’Amico takes great pleasure in navigating this still-developing legal landscape, particularly the technology part. “I’m a big geek,” she says proudly. “As a civil litigator, without filing a lawsuit, I don’t have the authority to subpoena a third-party website or platform. But in cases where we don’t know who the perpetrator is, we can use John Doe lawsuits and computer forensics to unmask anonymous actors.” Since 2014, D’Amico’s CCRLP has scoured the web of thousands of offending images. In 2017, it won a record-setting $8.9 million jury verdict in Seattle, Washington, and obtained a $6.4 million judgment in California in 2018, both of which drew national and global attention to the actionable nature of these crimes. At this point, she says, “most states are now working not to pass NCP statutes but to strengthen them. Victims are feeling more empowered and speaking out, and we are making forward progress.”

D’Amico was installed as president of the Miami-Dade chapter of the Florida Association for Women Lawyers on June 4, 2019, which happened to be the centennial of the passage of the 19th Amendment. Now, she has launched the MDFAWL Sexual Cyberharassment Task Force to help lobby the Florida legislature to strengthen the NCP statute and others, as well as to pass a federal law criminalizing NCP. All this work, she believes, embodies Fordham Law’s motto “In the Service of Others.” “The feeling you get from helping someone reclaim their sexual privacy is unique,” she says. “My mentor, Ron Fischetti [a Fordham Law Trial Advocacy adjunct professor], always said that when you do something and you get that fire in your belly, it means you’re doing the right thing. Well, I guess I’m doing the right thing because I’ve got that fire in the belly every day.”

If you’re working on an interesting case or in an emerging area of law, we want to hear about it. Tell us what you’re doing at fordhamlawyer@law.fordham.edu