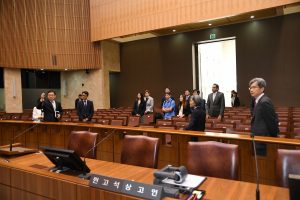 For the past 13 summers, Fordham has offered students the opportunity to gain insight into another country’s justice system with the Summer Institute in International Law held in Seoul, South Korea. Co-sponsored with Sungkyunkwan University (SKKU), Asia’s oldest continuous institution of higher learning, the program to date has hosted over 1,200 students from ten different countries and 70 different law schools. As the legal world continues to globalize, it has become imperative that lawyers have a deeper understanding of different legal cultures and systems as well as the laws that govern how different countries relate to one another.

The two week academic program typically offers three-credit courses in comparative and international legal subjects, such as International Business Transactions, International Commercial Arbitration, and Transnational Criminal Law. Classes are conducted in English, and participants also have the option to apply for an internship of either three or four weeks following the program’s end.

Every summer, the group visits important governmental institutions for a deeper look at South Korea’s justice system. This year’s participants had the opportunity to visit South Korea’s Supreme Court, where justices Min Yoo-sook and Kim Sang Hwan sat down with the students for a Q&A session. The justices and students discussed the Korean legal system, the role of the Court in Korean society, and the differences and similarities between the United States and Korean Supreme Courts.

During the Supreme Court visit, two judges who work at the Court were also present, one of whom is a Fordham alum: Hyo In Kang (LL.M. ’17), who had served as a judge in South Korea before earning his Master of Laws degree. (The other judge, currently serving as Director of International Affairs at the Court, is his twin brother!) Unlike in the United States, where Supreme Court justices typically hire recent law school graduates as clerks, Korean Supreme Court justices are assisted in their work by judges with at least ten years’ judicial experience. 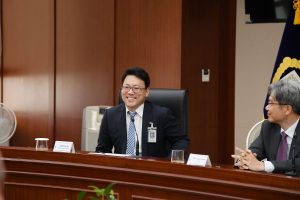 Though much of the conversation was facilitated by a translator, the discussion between the program’s students and the justices was no less engaging for the language barrier. “We were free to ask questions and engage in a highly informative and stimulating dialogue with the two justices, whose answers reflected their deep learning and inspired us all,” said Professor Youngjae Lee, who leads the program. After the Q&A, students toured the Court’s buildings and accompanying museum.

In addition to the Supreme Court, the students also visited the Constitutional Court of Korea and the National Assembly. “[The program] changed the way I see the world,” said participant Paul Guirguis ’21. “We learned how different courts and legal systems interact, as well as the delicate balance between countries’ executive and judicial branches through discussing both historical and current events.”