Return to Fordham Law School
You are at:Home»Centers and Institutes»Legal Scholars Richard Epstein and Jed Shugerman Talk Impeachment with the Fordham Federalist Society

On Wednesday, October 23, 2019, Richard Epstein, professor of law and director of the Classical Liberal Institute at New York University, visited Fordham’s Federalist Society for Law and Public Policy to debate the case for impeachment with Fordham Law Professor Jed Shugerman.

Professor Epstein is a highly prominent legal mind. In 2000, a study published in The Journal of Legal Studies identified him as the 12th-most cited legal scholar of the 20th century. In 2008, Professor Epstein was chosen in a poll by Legal Affairs as one of the most influential legal thinkers of modern times. Further, a study of legal publications from 2009 to 2013 found him to be the third-most frequently cited American legal scholar during that period, behind only Cass Sunstein and Erwin Chemerinsky.

“I think it’s important to set the context on this,” Professor Epstein began. “You can devoutly wish for President Trump to resign and still think that the impeachment case has to be subject to certain kinds of norms.” He went on to admit that he and Shugerman would be having less of a debate than a conversation, since the two professors likely agreed on many of the issues to be discussed. 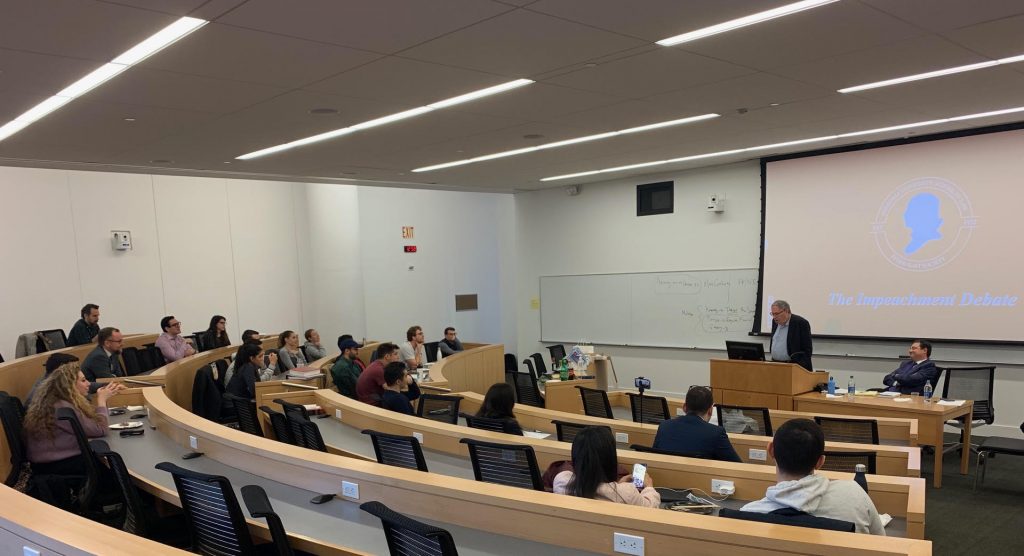 “What do we do with the so-called ‘customary Constitution’?” Epstein asked. There are large gaps in the Constitution, he explained, and there is a tendency to look to practice to determine how things should play out when the Constitution is silent on a particular issue. This has led to legal standards that are not grounded in the Constitution’s text, but are nonetheless well-established, he argued. He noted the recent case Zivotofsky v. Kerry, in which the Supreme Court relied on past practice to rule that only the Executive branch can determine if someone is a United States citizen for passport purposes. This issue does not appear in the Constitution.

When applying the “customary Constitution” principle to today’s current political environment, Professor Epstein noted the lack of any custom pertaining to impeachment. While the general impeachment power exists, such procedures have been so rarely used that there is no clear indication for how Congress should act in this circumstance. As a result, Professor Epstein suggested that impeachments should be bipartisan. “I do think bipartisanship has been a very important element in cases of this particular sort for a very simple reason,” he said. “Bipartisanship negates the possibility that an impeachment proceeding is a purely political action by one side in order to take advantage of the other.”

Epstein noted that the case for an impeachment charge against President Trump has not yet been sufficiently built. He suggested that Democrats should continue to collect evidence relating to the Trump administration to bolster the eventual charge, and that once Republicans joined the “impeachment bandwagon,” Trump’s removal would be likely. 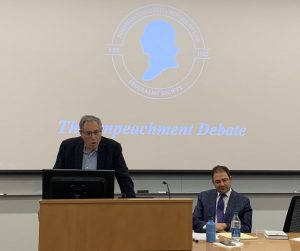 In his response, Professor Shugerman pointed out that even the concept of bipartisan impeachments would be unrecognizable to the nation’s founders. He said they “did not foresee parties as the main organizing structure for the early Republic,” although different political parties did exist at the time. To illustrate this, he reminded listeners how in the earliest presidential elections, the runner-up would simply become vice president. Instead of organizing along party lines, the founders more actively considered other organizing groups—patriots and loyalists, Federalists and Anti-federalists, or North and South. “How wrong they were,” Shugerman remarked, noting it only took about six years after the nation’s founding for the two-party political system to become the norm.

Nevertheless, although the founding fathers did not envision political parties as we know them today, Shugerman acknowledged that the impeachment process—involving a majority vote in the House but removal by the Senate through a bipartisan vote—does “approximate the bipartisan emphasis that Professor Epstein is looking for.”

The discussion between Professors Epstein and Shugerman was hosted by the Fordham Federalist Society for Law and Public Policy. The Federalist Society was founded in 1982 as a non-profit entity consisting mainly of conservatives and libertarians interested in law and public policy. The Society’s events are open to all.