When it comes to reporting on criminal justice reform, Emily Bazelon, a staff writer for the New York Times Magazine and senior research fellow at Yale Law School, has long focused on the role prosecutors play and the power they wield over justice.

Bazelon first became interested in the subject in the 1990s, when she met with a conservative district attorney in California. At the time, the prosecutor was thinking of reforming a three-strikes law responsible for giving a homeless man a life sentence for unscrewing the door of a food pantry.

Although the district attorney was focused on changing the law, Bazelon wondered if the homeless man’s case would have gone differently if it had landed on the desk of a different prosecutor.

This theme of the prosecutorial role in justice reform was central to a discussion held at Fordham Law on October 29 titled “Charged: The New Movement to Transform American Prosecution and End Mass Incarceration.” 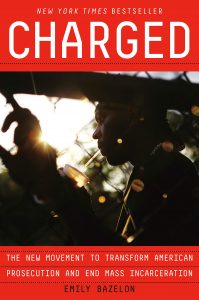 The title of the event is also that of Bazelon’s new book, which features the stories of people directly impacted by the American justice system. Bazelon was joined by Noura Jackson, who was wrongly convicted of murder, and Cadeem Gibbs, a racial justice activist with the National Juvenile Justice Network.

John Pfaff, a Fordham Law professor of criminal law, sentencing law, and economics, moderated the discussion. The author of “Locked In, The True Causes of Mass Incarceration and How to Achieve Real Reform,” Pfaff focuses his research primarily on empirical matters related to criminal justice. His recent work has illuminated the underappreciated role that prosecutorial discretion has played in driving up prison populations.

“Once I saw the role that prosecutors played in criminal justice, I saw it everywhere,” Bazelon said. She highlighted Jackson’s case as a key example of prosecutorial excess. “Noura’s story, to me, is an illustration of an abusive prosecutorial power,” Bazelon explained.

Jackson was the focus of a widely covered trial in which she was accused of murdering her mother in 2005. Then 18 years old, Jackson was sentenced to prison and served until the summer of 2016, when she was released after pleading guilty to voluntary manslaughter. All along, she maintained she was innocent.

While serving her sentence, a prison guard told her she would need to make a choice: she could either be right or she could be happy.

“I wanted to be both,” Jackson told the audience.

Jackson was aware that if she chose to keep fighting for her innocence, she could possibly remain in jail for years going through trial proceedings. If she pleaded guilty and gave up her “innocence,” she would get out faster.

“It seemed to me in the courtroom that I had three prosecutors,” Jackson said. “The judge and the two people [prosecutors]sitting at the table.”

“She went after me in such a personal manner, and I really couldn’t understand it,” Jackson said of Amy Weirich, the main prosecutor for Jackson’s case.

Gibbs echoed Bazelon and Jackson’s sentiment that reform of the system comes from many places, not just changes in law. “We have a system in this country where it’s better to be rich and guilty than poor and innocent,” Gibbs said.

Gibbs, an African-American man who at 16 was tried as an adult in New York, talked about his background coming from a community impacted heavily by a justice system in need of reform.

Gibbs also highlighted the power that parole officers exert on offenders. He recounted getting arrested for entering a different state just 72 hours before his parole was up. Despite getting verbal clearance from his parole officer to leave, Gibbs said the officer later acted as if she had never given him a green light to go on a trip. Gibbs was set free when his lawyers realized his parole had already been processed and finished, making his parole officer’s arrest warrant invalid.

Gibbs also highlighted inefficiencies in how prisons train convicts for life after they are released. He noted that one of the biggest training programs in prison is for barbers, but felons are denied barber licenses when they are released.

A common opinion among all three panelists was that there are many seemingly small, routine issues in trials—for example, having to wait for multiple court dates or  going to a courtroom only to wait 16 hours for a possible hearing—that are ripe for reform.

All three panelists agreed that local elections were key to criminal justice reform. Bazelon noted that the U.S. is one of the only countries in the world that holds elections for prosecutors. She argued that if more people participated in local elections, elected prosecutors might end up being more progressive and transform the justice system.

“The profession is integral to the solution,” said Bazelon of the role of prosecutors. “It has the tools it needs to heal itself. It just depends who’s doing the work.”