In the state of Wisconsin, a person joining a gun club would not be charged a tax on their membership fees. In that same state, however, a person buying a box of tampons would be charged sales tax. What is the difference? Wisconsin considers the gun club membership “essential,” but the tampons a luxury. Thirty-three states (including Wisconsin) impose a sales tax on menstrual products, while leaving products like bingo supplies or private jet parts (Missouri and Colorado, respectively) untaxed “essentials.” 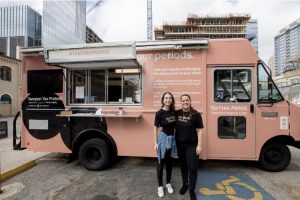 Herman and Maldonado in Austin with the Tax Free. Period truck.

Five Fordham Law students—Lindsey Rosenthal ’20, Alessandra Maldonado ’20, Stephanie Ali ’20, Mary Kate Cunningham ’20, and Suzanne Herman ’21, all participants in the Legislative and Policy Advocacy Clinic with Professor Elizabeth Cooper—have joined a nationwide campaign against the taxation of menstrual products. The campaign is led by Period Equity, an organization “dedicated to ensuring accessible, safe, and affordable menstrual products.” Period Equity has led the charge that taxes on these products are a form of unconstitutional sex-based discrimination.

“The tampon tax amounts to sex-based discrimination,” wrote Erwin Chemerinsky, dean of UC Berkeley Law School, and Jennifer Weiss-Wolf, co-founder of Period Equity, in an op-ed for the Los Angeles Times, “making it more than merely unfair or inequitable, but unconstitutional and therefore illegal.”

Protesters in many of the 33 states that continue to tax menstrual products are working together to demand a change. On November 20, 2019, a nationwide event dubbed the “Tampon Tax Protest” culminated many months of work. It was organized by Period Equity and LOLA, an organic menstrual product company, in a partnership called “Tax Free. Period.” Fordham Law students joined to coordinate efforts with other law students across the country.

Though New York State no longer imposes its “tampon tax” (it was removed after a 2016 lawsuit brought by Period Equity), the students’ work for the organization has linked them with law students in states that are still affected by the tax, helping them to organize efforts for the protest launch.

Herman described how the protest is designed to force change: “People in many of the 33 states that don’t currently exempt menstrual products from tax will be participating in a protest wherein they submit to their various tax revenue boards a form asking to be refunded for the sales tax they’ve paid on menstrual products.”

“Tax authorities don’t get these refund forms very often,” explained Ali. “Having them receive even 10 or 20 forms would bring much needed attention to this important issue.”

“Removing the tampon tax is only the first step in achieving menstrual equity.”—Lindsay Rosenthal ’20

Maldonado and Herman traveled to Austin, Texas, to join LOLA on a bus tour during which the company is selling LOLA products and providing purchasers with tax refund request forms and assistance in filling them out. “In some states, the vendor has to sign off on the form, so having LOLA there to do that on the spot is a terrific opportunity,” noted Herman.

Rosenthal, Cunningham, and Ali kept busy coordinating the protest from Fordham Law School. “We divided up the 33 states amongst the five of us,” explained Cunningham. “We all coordinated with law students in our respective states, keeping track of their events and thanking them for their support.” Across the nation, student groups at law schools had organized different events in conjunction with the protests, including menstrual product drives for those who often cannot afford to purchase them, Rosenthal said.

“This is ongoing work.”—Mary Kate Cunningham ’20

Maldonado reported that in Austin, 52 tax refund request forms were submitted, and she and Herman forged connections on the ground. “We met a lot of passionate women who were extremely willing to participate,” she remarked.

Tax Free. Period’s demand is that the 33 states remove the tampon tax before Tax Day in 2020. From there, Period Equity has vowed to facilitate anti-tampon tax litigation against states that fail to comply.

“Removing the tampon tax is only the first step in achieving menstrual equity,” said Rosenthal. The five students remain committed to their clinic work with Period Equity and they hope to be able to turn their attention to making safe menstrual products affordable for all women in New York, especially in vulnerable populations. “Period Equity has worked with the New York City Council and New York State to make sure products are available for women who are incarcerated or in homeless or domestic violence shelters,” said Cunningham. “Wednesday is one day, but this is ongoing work.”