Return to Fordham Law School
You are at:Home»Centers and Institutes»Ghosts in the Machine: The Invisible Workforce that Keeps the Internet Running

While artificial intelligence (AI) is typically envisioned as untainted by human hands, a group of workers is often toiling behind the scenes. These invisible workers perform essential functions that fill the gaps of automation, like flagging inappropriate content, proofreading, and more. Mary Gray and Siddharth Suri, both senior principal researchers at Microsoft Research, term this phenomenon “ghost work,” as these laborers are not only invisible to the public, but even to one another. 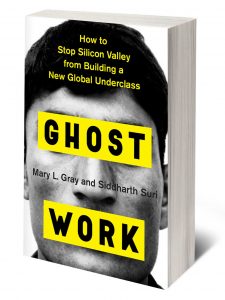 On July 9, the McGannon Center hosted a virtual event to celebrate Gray and Suri’s co-authored Ghost Work: How to Stop Silicon Valley from Building a New Global Underclass, winner of the Center’s 2019 book prize. The book, a 2019 Financial Times critics’ pick, examines the shadowy workforce that powers the internet.

“We’re talking about a platform where someone can come and post a job, and someone else can come and do that job for pay,” explained Suri. “It’s basically that simple.” Suri, a computational social scientist, had been researching this type of crowd-sourced work for several years, but had often been stymied when people at his lectures would ask him, “Who are the workers?”

Gray, an anthropologist, and Suri spoke with employees at Amazon, Uber, Google, LeadGenius, and other companies who use on-demand workers for firsthand accounts of their experiences. These laborers work remotely, without an official job title, and often without ever interacting with other people working in similar positions for the same company. The work is typically on a contingent basis, and offers low pay (often less than minimum wage) and zero security—not only do these employees not earn benefits from the companies that employ them, they are liable to be let go without warning or reason. But separation from their “coworkers” makes it incredibly difficult for these phantom workers to organize and advocate for better pay, benefits, and worker protections.

After Gray and Suri outlined many of the pitfalls and risks of “ghost” work, Professor Olivier Sylvain, director of the McGannon Center and moderator of the event, asked, “What is the incentive for doing what is ostensibly low-impact, low-value work?”

For many, Gray says, ghost work offers a sort of freedom they cannot find in a more formal or traditional work environment. “Our modern sense of achievement is tied to the idea that you get what you choose what you do,” she noted. “They’re not immune to that desire.” She cited one of the women she interviewed for the book, who told her, “What makes this useful to me is that it allows me to pursue the other things that I care about.”

“This is not a market problem; this is a social problem.”—Mary Gray, Ghost Work co-author

Paul-Emile helped bring the discussion to the current climate by mentioning another invisible group of workers. “When we think of those on the front lines of the coronavirus pandemic response, we tend to think about doctors and nurses, but there’s a whole seemingly invisible workforce that, like the workers in Ghost Work, make very little money and have few protections,” she said. “This group includes hospital housekeepers, cooks, phlebotomists, orderlies, and nursing assistants. They’re the healthcare industry’s ghost workers. The 7 million people across the country who make up this group of essential workers is largely black, brown, and female, and constitutes roughly 80 percent of the healthcare workforce.”

To protect ghost workers across the board, Gray and Suri’s work suggests looking to courts, not businesses or healthcare organizations, to effect change.