Return to Fordham Law School
You are at:Home»Centers and Institutes»New Scholarship Program Honors the Late Judge Deborah A. Batts

To honor the late Judge Deborah A. Batts, a trailblazing legal scholar and pioneering jurist, Fordham Law School has created a new scholarship program and announced its very first recipients.

Judge Batts, the first Black faculty member to receive tenure at Fordham Law and a U.S. District Judge for the Southern District of New York, passed away on Feb. 3, 2020. She joined Fordham Law School as a professor of law in 1984 and became a tenured associate professor of law in May 1990. Four years later, she resigned her tenure and broke barriers by becoming the first openly LGBTQ judge on the federal bench—after being nominated by President Bill Clinton.

“Judge Batts created a remarkable legacy. Not only as a barrier-breaking Black woman and out lesbian, but by the force of her intelligence, compassion, and desire to counsel and support others,” said Dean Matthew Diller. “She was a devoted mentor as a professor to our students for more than 25 years, and this new scholarship program at Fordham Law is a wonderful and important way to honor her memory.”

“Judge Batts was a terrific judge, and wasn’t shy about holding the government to account. Beyond that, as a Black judge, and the first openly gay judge on the federal bench, she was an inspiration,” said Bennett Capers, director of Fordham Law’s Center on Race, Law and Justice.

“I feel a special pride that I’m now teaching at the law school where she got her start, and that the Deborah A. Batts Scholarship Fund has allowed the school to name two great inaugural Batts Scholars—Cameron Porter ’23 and Lamar Smith ’23—to work with the Center on Race, Law, and Justice.”

“For me, it’s one the many continuations of her legacy,” Capers added. “And already, the inaugural Batts Scholars have been terrific, conducting legal research on issues relevant to the Center, helping with event planning, and serving as a sounding board as we figure out how we can better support the students at Fordham.”

Meet the Deborah A. Batts Scholars

The Deborah A. Batts Scholarship provides funding for Porter and Smith to work closely with the Center on Race, Law and Justice to engage in original research and analysis of core civil rights and social justice issues. 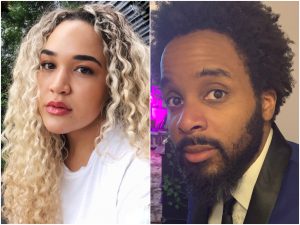 Both students said that they were thrilled to get the news from Dean Matthew Diller that they had been chosen as the first Deborah A. Batts Scholars.

“What stood out to me is how this scholarship honors Judge Batts, who had to overcome many obstacles to get to where she was,” Smith said, adding how grateful he was to be named as a recipient. “For me, it was great to hear that aspect of her life would be recognized.”

Porter also expressed gratitude for being given the opportunity to “fill Judge Batts’ big shoes.”

“Judge Batts was amazing, and I would have loved to have met her,” she said. “I’m very excited for what’s to come, and I can’t wait to see what Lamar and I can do with this scholarship.”

Prior to joining Fordham Law, Smith earned a bachelor’s degree in political science from Rutgers University in 2010. His current interests in entrepreneurial law, in addition to criminal law, stem back to his experience as an online business owner during his undergraduate career and after graduation. As a Deborah A. Batts Scholar, Smith says he wants to be an advocate for those who cannot advocate for themselves—ensuring that clients are treated equally and fairly as they navigate the criminal justice system. He began the spring semester working on a research project with the Center on Race, Law and Justice, which examines the consequences of residential segregation on communities of color.

Porter received a bachelor’s degree in political science from the University of California, Los Angeles in 2020. She is particularly interested in pursuing intellectual property law. Porter says she was influenced by the experience of growing up as a hip-hop dancer and seeing people of color make art and concepts that were not adequately protected in the entertainment industry. Porter says she is excited to be working as a research assistant for the Center on Race, Law, and Justice this semester while serving as a Deborah A. Batts Scholar. In that role, she hopes to work more closely on matters related to criminal law and criminal justice reform.

Dr. Gwen L. Zornberg, Judge Batts’ wife, said the scholarship was a fitting legacy. She reflected on Judge Batts’ words, “The overwhelming and enduring truth is that by protecting and defending the rights of others, we protect and preserve those rights for ourselves and our loved ones.”

For more about the late Judge Deborah A. Batts, watch this video about her life and legacy.