The housing crisis gripping the nation and the opportunities to advance housing justice in the wake of the COVID-19 pandemic was the subject of this academic year’s final Social Justice Leaders Virtual Speaker Series. The event, titled “Coviction: COVID-19 and the Housing Crisis,” was hosted by Fordham Law’s Feerick Center for Social Justice and featured Sateesh Nori, attorney in charge of the Legal Aid Society’s Queens Neighborhood Office. 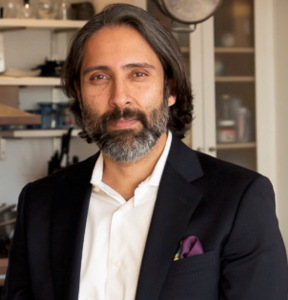 Housing issues have long been associated with public health. Unstable or inadequate housing has been linked to a host of health conditions, such as asthma, poor mental health, adverse birth outcomes, and lead poisoning. During the pandemic, housing has also been recognized as a determining factor of an outbreak’s impact on a community. Poverty, housing instability, and overcrowded homes have all left residents particularly vulnerable to the virus and its spread.

For nearly two decades, Nori has fought for New Yorkers’ right to safe, affordable, and decent housing. During the COVID-19 crisis, he has continued to work to address this significant social determinant of health. In his presentation, Nori drew on the work of Dean Matthew Diller, who, as an attorney at the Legal Aid Society in the 1980s, advocated for the right of rental assistance to needy families. Nori credited Dean Diller for his work in the landmark case, Jiggetts v. Grinker, 75 N.Y.2d 411 (1990), which established the principle that families need basic levels of governmental support to maintain their housing.

The Right to Housing

Nori presented his talk in three parts, beginning with an overview of the history of the struggle for the right to housing in New York. He shared a number of stories of the experiences of tenants, including Eleanor Bumpers, a 66-year-old Black grandmother who lived in public housing in the Bronx. In 1984, she faced eviction for nonpayment of rent, which Nori said she had refused to pay because repairs were needed to make her apartment habitable. The New York City Housing Authority requested NYPD assistance at the time of eviction, claiming that Ms. Bumpers was resisting eviction while brandishing a knife. Police clad in riot gear broke down her door, and during the ensuing struggle, shot Ms. Bumpers twice with a 12-gauge shotgun. Nori, visibly moved as he recounted Ms. Bumpers’ death, called it “a blaring reminder that violence, or the threat of violence, is just beneath the surface of all evictions.” Now, decades later, millions continue to face the threat of eviction as the pandemic compounds their risk of harm.

According to Nori, “the dominant narrative question about housing has always been, ‘Who deserves to stay in their home?’” Individuals’ inability to pay rent is often seen as a personal failure, Nori argued, rather than as the consequence of systemic and deeply rooted economic inequalities. Housing is typically viewed in “punitive and moralistic terms,” said Nori. Evictions are thought to be the natural consequence of failing to repay one’s debts. Our system of housing justice often overlooks the reasons why certain tenants face disadvantages that prevent them from paying rent. “The law,” Nori argued, has “rarely accounted for the institutional racism, history of redlining and housing segregation, and economic hardship that poor Black and brown tenants faced in New York City.”

In the second part of his talk, Nori described the disparate health and economic consequences of the COVID-19 pandemic on low-income communities and communities of color, as well as the changing housing landscape. Beginning in March 2020, the federal and New York State government placed moratoria on evictions for nonpayment of rent. “Landlords cried foul, claiming that without evictions as a threat, no rent would be collected,” Nori stated. “Calamity was predicted for the housing economy. But it never came.” Many continued to pay their rents, and landlords could still sue those who did not.

Assistance was also made available to those facing financial hardship and the burden of rent through the Coronavirus Aid, Relief, and Economic Security (CARES) Act, which Congress passed on March 27, 2020. Housing courts also began to operate virtually, and legal service providers interacted with clients through digital platforms. This flexibility could be continued after the pandemic to expand access to justice. But it also poses barriers, particularly to those who have limited experience with or access to these technologies.

Reimagining Housing Law in the Age of COVID-19

Nori shared opportunities to reimagine housing justice in a post-COVID world in the third part of his presentation. “First and foremost,” he asserted, the crisis has shown us that “evictions are not necessary.” During the pandemic, the eviction moratorium has offered protections for those most vulnerable. However, as Nori stated, “low-income tenants are in states of constant crisis—COVID-19 is only the latest and most serious one.” To promote public health, tenants need access to stable, safe housing. Additionally, Nori called for permanent, accessible—and even automatic—rent subsidies. During the crisis, he pointed out, the cost of unpaid rent amounted to less than 2 percent of New York City’s budget, “a cost that we can, and should bear.”

Finally, Nori described how digital technologies have offered ways to rethink how services are delivered, making it possible to expand the right to counsel for tenants across the state. Nori is on the board of the remote filing platform, justfix.nyc, an app that allows tenants to use their smartphones to document conditions in their apartments and file legal documents. Platforms like these can empower tenants and better protect their right to adequate housing, Nori said. During the event, audience member Judge Fern A. Fischer, a former deputy chief administrative judge for New York City courts, praised the app’s success and called for its use on Long Island.

A Call to Action

Concluding the event, Dora Galacatos, executive director of the Feerick Center for Social Justice, called Nori’s remarks a call to action—“to think about what we can do as lawyers, as a legal community, and as a civil society to address the broad injustices and racism” at the root of the housing crisis. Galacatos said the COVID-19 crisis puts the nation at an inflection point. Housing is a human right, Galacatos observed, and how we respond now to protect this fundamental right will provide a template for housing justice in the post-pandemic world.