Return to Fordham Law School
You are at:Home»Alumni»Alumni Spotlight: Fanny Holtzmann ’22, a Trailblazer for Women in Entertainment Law

“I don’t follow precedent. I establish it,” Fanny E. Holtzmann ’22 was once quoted as saying, reflecting her distinctive brand of confidence.

Holtzmann specialized in motion picture and copyright cases and practiced law in New York, Hollywood, and London. Her most well-known case, Youssoupoff v. MGM Pictures, Ltd., transformed defamation law and advanced the horizons of First Amendment law. Aside from representing Hollywood and Broadway stars, Holtzmann was also active in politics and attended the first United Nations conference in 1945.

Time magazine reported in 1934 that “Miss Fanny Holtzmann has been known vaguely in Manhattan theatrical circles as ‘the highest paid woman lawyer in the world.’ Since most women attorneys receive trifling fees, this distinction was negligible.”

From Brooklyn to the Big Screen

The globetrotting entertainment lawyer was the middle child of seven children and grew up in Brownsville, Brooklyn. In such a big immigrant family, she connected most with her maternal grandfather, Rabbi Hirsch Bornfeld, who encouraged her to pursue law, despite having dropped out of high school.

In 1919, Holtzmann enrolled at Fordham University, which was then located on the 27th and 28th floors of the Woolworth Building. She worked in the office of Keppler & Hochman, a theatrical law firm on one of the lower floors, during the day and would ride the elevator upstairs to attend her evening law classes. Her grandfather loaned her money for tuition.

Holtzmann’s office job required typing, but she did not know how to type. She reportedly told her bosses, “Gentlemen, I can’t type … but I did collect checks on unpaid invoices your lawyers couldn’t get paid on” for one of the firm’s clients, The Morning Telegraph.

“She asked the debtors to come in and talk to her, without being specific about her capacity in the law firm,” wrote the late Thomas L. Shaffer, Robert and Marion Short Professor Emeritus of Law at Notre Dame Law, in a 1986 West Virginia Law Review article.

“When they came, she signed them up as clients-her clients, even though they had to wait a year or two for her to get her license. This is the way she met Edmund Goulding, Hollywood actor, writer, and director, and her life-long friend and client.”

After receiving her law degree, Holtzmann—who was not admitted to the New York City Bar Association because of her sex—was the first woman to get an office on the ninth floor in the new Bar Building at 36 West 44th Street, according to Shaffer. She reportedly rented out the office two weeks before taking the bar exam in 1923. The same day she learned she had passed the bar, Holtzmann opened her law office for business. Holtzmann had the third highest grade of all the applicants in New York State, according to a collection of profiles that was published by the New Yorker in 1944.

“The day she passed the bar examination she had more than a hundred show-business clients waiting for her to get her license; she had retainers from them,” wrote Shaffer. “She argued for prompt admission so she could see to these clients—an argument she took all the way to the New York Court of Appeals and won.” 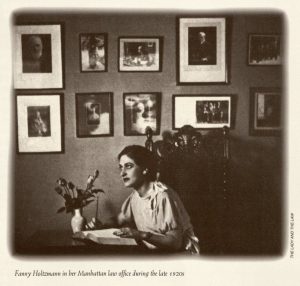 Fanny Holtzmann ’22 in her Manhattan law office during the late 1920s. (Photo from “The Women of Fordham Law” / Photo from FLASH/The Fordham Law Maloney Library archive)

In 1932, The Brooklyn Daily Eagle reported that London newspapers described Holtzmann as “the most brilliant woman lawyer in America” based on her work representing Ina Claire in her divorce from John Gilbert. Stage and screen actress Claire sued for divorce in July 1931 from her silent film star husband Gilbert, demanding no alimony and claiming he had been cruel and neglectful. The New York Times reported Gilbert had “continuously complained that they were too ‘unsuited’ and would become very angry at trifles.”

Holtzmann’s personal friends included the King and Queen of England, Associate Justice of the Supreme Court Benjamin Cardozo, Chief Justice William Howard Taft, Eleanor Roosevelt, and Winston Churchill. When she began her practice, Justice Cardozo reportedly told her, “[Y]our true education will come from your clients …. You will be a good lawyer because you have infinite curiosity.”

Some of her biggest clients included dancer Fred Astaire (whose first screen contract she negotiated), playwright Noel Coward, actress Gertrude Lawrence, playwright George Bernard Shaw, British nobles, and the royal Romanov family—whom she successfully defended in a libel suit against Metro-Goldwyn-Mayer Pictures in 1934. Shaffer wrote that Holtzmann found out about the Romanov libel case at a cocktail party after other New York lawyers turned it down.

In Youssoupoff v. MGM Pictures, Ltd., Holtzmann’s client Princess Irina Alexandrovna Youssoupoff of Russia claimed the 1932 movie, “Rasputin and the Empress,” misrepresented her relationship with Rasputin and presented false portrayals of the Russian royal family. Princess Youssoupoff received a $125,000 cash settlement in damages for the showing of the film in Britain, as well as larger settlements from other countries that had also released the film. The scene in question was also edited out from feature showings.

As a result, Holtzmann’s win across the Atlantic made her one of the most sought-after lawyers in Hollywood. The Jewish Bulletin called the case “one of the greatest and most dramatic legal triumphs.” The case’s outcome is said to have set the precedent for the “any resemblance to actual persons either living or dead is coincidental” disclaimer displayed at the beginning of films and books.

When Holtzmann learned about Hitler’s early atrocities through her European clients, she used her political connections in the U.S. Immigration Service to help Jewish individuals and families get visa applications to leave Europe. Her own family did not survive the Holocaust, according to the American Jewish Archives.

After World War II, she devoted her time and money to focus on the newly established State of Israel, playing a significant role in its creation.

In 1945, Holtzmann served as special counsel to Chiang Kai-shek of the Republic of China at the first United Nations conference. She helped the Republic of China become a permanent member of the U.N. Council and one of the first five countries to receive veto power. In 1947, Holtzmann also helped deliver the crucial Chinese vote in favor of the U.N.’s partition of Israel.

While Holtzmann was looking for a new property for Gertrude Lawrence in 1950, she received a copy of Margaret Landon’s Anna and the King of Siam from literary agent William Morris. Morris thought a stage adaptation of the book would be perfect for Lawrence, but Holtzmann thought a musical version would be better. According to the World Heritage Encyclopedia, Holtzmann sent the book to composer Richard Rodgers and lyricist Oscar Hammerstein II to write the score, which eventually became The King and I musical.

In a bedside ceremony on Jan. 18, 1980, Hebrew Union College-Jewish Institute of Religion awarded Holtzmann an honorary doctorate in humane letters. She passed away at Memorial Sloan-Kettering Cancer Center less than a month later on Feb. 6.

Holtzmann’s nephew Edward O. Berkman—author of The Lady and the Law: The Remarkable Story of Fanny Holtzmann—said his aunt was “bored by legal theory” and often “disregarded precedent.” Her greatest skill, as described in the New York Times, was negotiating—”knowing when and how to make the phone call that kept potentially messy litigation out of the courts.”