“I am so proud of our VIS team, their coaches, professors and DRS members.  This great victory resulted from the hard work and dedication of the whole DRS family,” said Professor Jacqueline Nolan-Haley, director of Fordham’s ADR & Conflict Resolution Program.

The Problem: A COVID-19 Patent Dispute

The Vis problem was released in October 2020, and the team spent the past six months mastering the nearly 60-page record, conducting research on scholars and case law, and preparing arguments. This year’s timely problem centered around patent licenses for a COVID-19 vaccine. The competition, typically held in Hong Kong, was conducted remotely this year.

Competitors Ian Bollag-Miller ’22, Fallon Sheridan ’22, and Nikol Oydanich ’22 competed virtually in the general rounds from Sunday, March 14, to Wednesday, March 17. As a result of their impressive performances in the general rounds, the team advanced to the elimination round of 32 teams. Bollag-Miller and Sheridan prevailed over Bucerius Law School in the round of 32, and, competing at 3:00 a.m. EST, they triumphed over NALSAR University in the round of 16. Due to a scoring error from the general rounds, the Fordham competitors faced two rounds of eight, against both Universitas Katolik Parahyangan and Unipê-University Center of João Pessoa. After securing a victory in each of these rounds, the competitors advanced to the semi-final round on Sunday, March 21, at 12:30 a.m. EST. Despite minimal sleep while competing on Hong Kong time, the team prevailed against Albert Ludwigs Universität Freiburg and advanced to the final round.

For the final round, Bollag-Miller Sheridan faced Westfälische Wilhelms-Universität Münster at 7:00 a.m. EST. The teams had the honor of pleading before Xavier Favre-Bulle, president of the Arbitration Court of the Swiss Chambers’ Arbitration Institution (SCAI), Hon. Chief Justice Geoffrey Ma, second Chief Justice of the Hong Kong Court of Final Appeal, and Janet Walker, Chartered Arbitrator and scholar.  The moot was broadcast to the public over Facebook Live. After an excellent round against Team Münster, Fordham Law was announced the winner of the Vis East Moot. 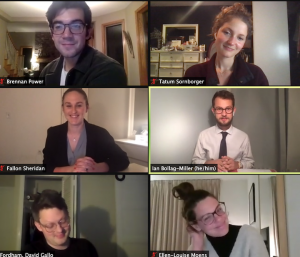 The Fordham Vis East Team also owes its success to its other four Vis West competitors (Ryan Hor ’22, Becca Spendley ’22, Heather Cameron ’22, and Chris Haughey ’22), who all competed at the Vis West Moot beginning Saturday, March 27. The Vis West Moot, typically held in Vienna, is the sister competition of the Vis East Moot and was also held virtually this year.

The Vis West team finished in the top 64 teams out of 380 teams from across the globe. After a week of incredible oral arguments, the Vis West team made it into the playoffs for the first time in over seven years. Competitors Rebecca Spendley ‘22 and Chris Haughey ‘22 received Honorable Mention for Best Oralist. Together they brought Fordham’s total awards to 7 this year, further making Fordham history.

The Fordham team could not have succeeded at the Vis Moot without the invaluable guidance of their coaches—Adjunct Professors David Gallo and Ellen-Louise Moens and students Tatum Sornborger ’21 and Brennan Power ’21. The coaches spent countless hours reviewing the problem and working with the Vis Bench Team and competitors.

“The Fordham team is incredibly thankful to its fellow DRS members, the DRS Executive Board, and all of the Vis alumni that attended the many virtual rounds and offered their words of encouragement,” said Sornborger. “We couldn’t have done it without them!”