The Fordham Law community is mourning the passing of Dennis J. Kenny FCRH ’57, LAW ’61, a lifetime director of the Fordham Law Alumni Association (FLAA) who served on the association’s board of directors for more than 25 years. Kenny died on October 1 at the age of 85. He is survived by his beloved wife of 64 years, Judith GSE ’86; and three children, Brian; James and his wife, Kristen; and Susan and her husband, Simon Coope, as well as his much-loved grandchildren, Owen, Aidan, and Anastasia.

“Dennis Kenny was the model of a lawyer in the service of others. He was committed to using his talents, insights, and resources to helping others—he gave of himself generously and without reservation,” Dean Matthew Diller said.

“Dennis radiated positive energy, which he brought to bear on a wide range of issues and causes, always with a deep commitment to the belief that people working together across boundaries can accomplish great things,” Dean Diller continued. “I will miss him—his warmth, his passion, and his deep love for our Law School.”

Kenny served as a director, senior vice president and general counsel of Interway Corporation, guiding its move from the American Stock Exchange to the New York Stock Exchange and later its sale to Transamerica Leasing. 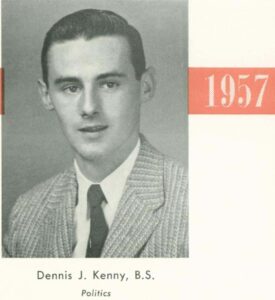 Kenny was the eldest child and son of Irish immigrants, William Kenny and Anastasia Slattery Kenny, and was born and raised in White Plains, New York. He attended local Catholic schools his entire life, beginning his education at St. John the Evangelist School, continuing at Archbishop Stepinac High School, and eventually studying at Fordham College at Rose Hill. Kenny majored in political science and graduated from Fordham College in 1957, where he was on the Dean’s List and a member of the Senior Honor Society. He married Judith Veronica Preble of Valhalla, New York, during his senior year.

Kenny then enrolled in Fordham Law’s evening division and earned a J.D. from Fordham Law in 1961. At the Law School he received Dean’s List honors and graduated in the top 10% of his class. While raising a family and taking evening classes, Kenny also excelled as a member of the Fordham Law Review‘s Volume 29 and wrote four articles for the Law Review.

Kenny was loved and admired by his many friends, young attorneys whom he mentored, and his extended family.

“Dennis served others quietly and without a peer, building community and helping those in need in so many different ways,” said Dean Emeritus and Norris Professor of Law John D. Feerick ’61, explaining that helping students was a particular “trademark of his.” “He particularly loved bringing students and alumni together at various functions and was invested in helping students find either a summer job in law school or a job after graduation, and helping those who were looking to change jobs.”

“He had such a quality of goodness about him that made him very special and extremely generous,” Dean Feerick added. “We lost an exceptional graduate and I lost a dear friend of more than 60 years.”

Giving Back to His Fordham Alma Maters

Kenny was committed to Fordham Law and its service focus throughout his life. He served as an active Fordham Law Alumni Association member for more than 40 years, advised aspiring designers at the Fordham Fashion Law Institute on legal matters, mentored LL.M. students in the Law School’s International Law Affinity Group, and accompanied the Feerick Center for Social Justice on trips around the world.

“Dennis lived and breathed Fordham,” said FLAA President Palmina Fava ’97. “He gave generously of his time, his sage advice, his warm personality, and his resources to help Fordham as an institution, as well as its alumni and students. He will be dearly missed,” she added.

At Fordham Law’s Corporate Counsel Dinner in 1999, Kenny was honored with the Richard J. Bennett Memorial Award, which recognizes corporate leaders with the highest standards of ethical conduct, moral purpose, and selfless commitment. He also received The International Law Journal’s Amicus Fidelis Award in 2006. The following year Kenny was named the FLAA’s Westchester Chapter Alumnus of the Year and he helped plan the 50th Jubilee. In 2008, he was awarded FLAA’s Medal of Achievement at the Annual Luncheon. Three years later, he received the Fordham Law Lifetime Achievement Award. 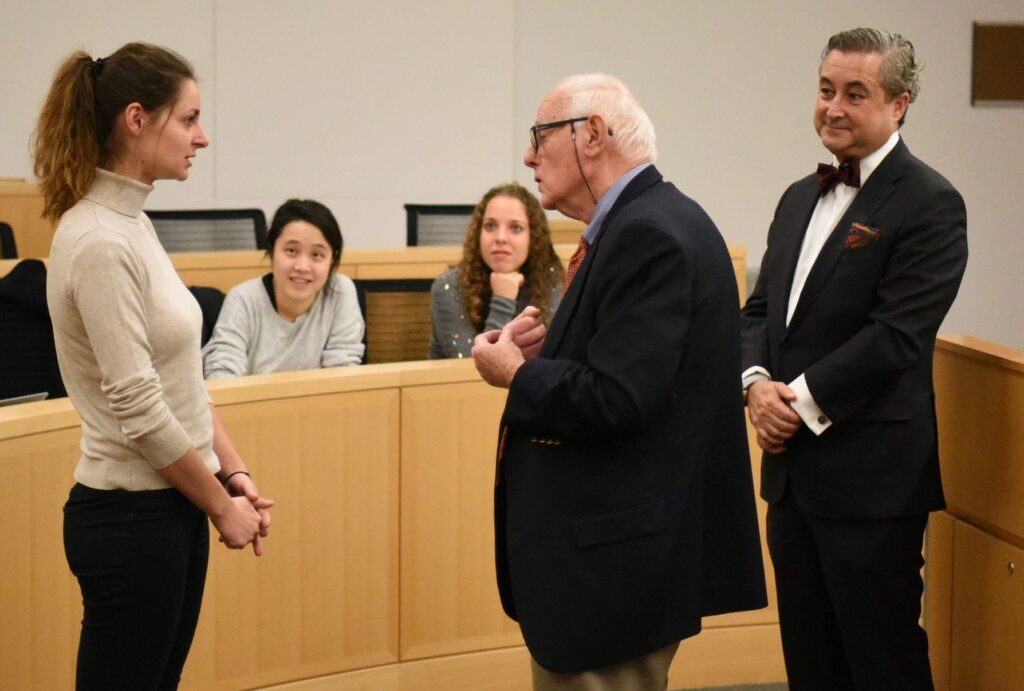 Kenny supported the Feerick Center for Social Justice since its founding in 2006, personally working on issues of immigration and debt collection. He joined the Center on multiple trips to Ghana to educate local lawyers on arbitration and mediation and worked with The Catholic University in Ghana on poverty issues. Kenny said in 2019 that the Feerick Center was a “good example of the Jesuit mission,” which motivated him to continue supporting social justice towards the end of his life.

In 2017, Kenny edited The John F. Sonnett Memorial Lectures at Fordham University School of Law: A Half-Century of Advocacy and Judicial Perspectives, alongside Joel E. Davidson ’75. The book represents the distinguished Sonnett lecture series that, at that time, had taken place at Fordham Law over the last 45 years—encouraging attorneys and society to improve the training of lawyers, respect the independence of the judiciary, place ethics at the forefront, question the efficacy of the criminal justice system, and explore the complex philosophical issues facing the judiciary.

In 2012, Kenny and his wife Judith were inducted into Fordham University’s Archbishop Hughes Society, which recognizes individuals whose spiritual, financial, and intellectual gifts have helped the University realize its mission.

In 2019, Kenny was named “Ram of the Year” by his Fordham College alumni peers and the Fordham University Alumni Association Advisory Board at the Association’s Alumni Recognition Reception. When he was told that the award honors a graduate who has enhanced the reputation of Fordham University through their professional achievements, personal accomplishments, and loyal service to Fordham, Kenny simply said: “I feel truly unworthy.”

Kenny thanked his wife Judith upon receiving the award and spoke about the immense joy of serving as a mentor at Fordham, saying,”There’s no better way to give back to the University that has bestowed an education on you.”

After graduating from Fordham Law, Kenny remained in New York City to work at Cleary, Gottlieb, Stein and Hamilton, practicing in the areas of international litigation, antitrust, and corporate law. Kenny later joined the firm of Phillips Lytle in Buffalo for five years as an associate. During that time, he volunteered with the New York Bar Association and marched during the Civil Rights Era to advocate for the voting rights of Black Americans in Mississippi—at great personal risk, but at great personal reward as he became a lifelong advocate for civil rights and equality.

In 1968, Kenny joined North American Rockwell Corporation in Pittsburgh, but left a year later when he was recruited to become an in-house counsel for Integrated Container Service, a lessor of intermodal freight containers that eventually became a division of Transamerica Corporation under the name Transamerica Leasing.

Kenny retired as senior vice president and general counsel of Transamerica Leasing after more than 30 years, devoting his retirement years to his family, FLAA, The Elizabeth Seton Children’s Center in Yonkers, and various humanitarian causes in Ghana, West Africa.

Kenny helped raise money for the construction of a new facility with the audit and development capital committees of the Elizabeth Seton Children’s Center in Yonkers, where he was a trustee and member of the board of directors. For close to 30 years, he also served on the Board of Visitors of The Elisabeth Haub School of Law at Pace University in Whiteplains. In 2019, Kenny was honored with a Distinguished Service Award at Pace Law School.

Kenny often traveled for business, but also traveled for pleasure, visiting many parts of the world, which afforded him opportunities to tour Ireland and visit family there. He had a fondness for the seashore, vacationing on Cape Cod and Maine, and for many years maintained a second home on Nantucket Island.

The funeral service for Dennis J. Kenny will be held on Thursday, October 7, 10 a.m., at St. John the Evangelist Church. Father Joseph M. McShane, S.J. will be the principal celebrant of the Mass. The burial service will take place at 11 a.m. at Mount Calvary Cemetery.

In lieu of flowers, the family asks that donations be sent to the following: