Nikole Hannah-Jones, creator of The New York Times Magazine’s “1619 Project,” a collection of articles that examines the legacies and consequences of slavery in America, graced the stage at Fordham Law School to speak with more than 500 members from the Fordham community in a hybrid event held in-person and broadcast online. The event provided a platform for Hannah-Jones to discuss not only The New York Times Magazine collection, but also her recent book—The 1619 Project: A New Origin Story—which was based on the original collection and has been a New York Times bestseller. Given the impact of the project, she’s even penned a companion children’s book, The 1619 Project: Born on the Water.

A Pulitzer Prize winner, New York Times reporter, and Howard University Knight Chair in Race and Journalism, Professor Hannah-Jones served as the inaugural speaker of the Law School’s first Eunice Carter Lecture Series on Feb. 1, discussing America’s incomplete historical understandings of race and how our lack of a common foundational understanding of U.S. history threatens the American experiment and future of democracy. Dean Matthew Diller and Eunice Carter’s great-granddaughter, Leah Carter, opened the program with reflections on the trailblazing Eunice Carter ’32, one of the first Black women to graduate from Fordham Law. Following introductory remarks by Fordham Law Professor Catherine Powell—a leading scholar at the intersection of race, gender, law, and economic precarity—Hannah-Jones was interviewed by Janai Nelson, associate director–counsel and soon-to-be president of the NAACP Legal Defense and Educational Fund.

“Professor Hannah-Jones’ Pulitzer Prize-winning ‘1619 Project’ has played a critical role in bringing our country to reassess the relationship between Black history and U.S. history more generally—moving the Black experience to the fore in our understanding of the forces that have shaped our country and providing a deeper understanding of the challenges that we face in achieving the promise of equal justice,” said Dean Matthew Diller in his opening remarks. “She has literally changed what we mean when we talk about Black history and U.S. history, and we are extremely fortunate to have her share this evening with us.” 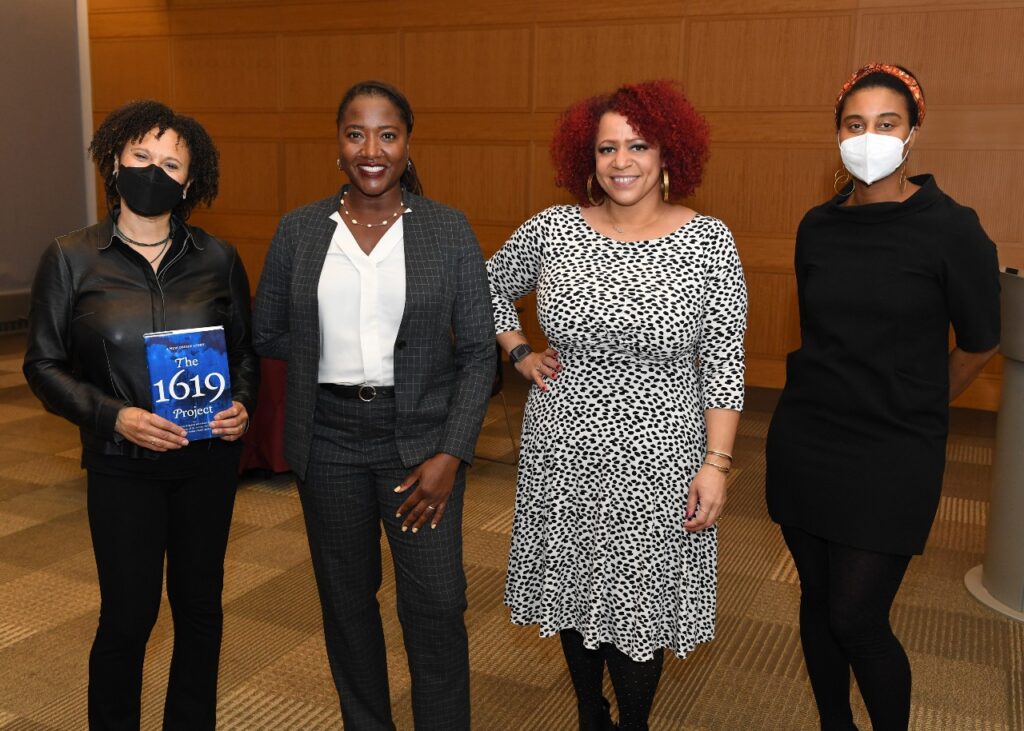 Hannah-Jones, who has written extensively about racial inequality as a journalist for the past 20 years, said the genesis of “The 1619 Project” goes back to her larger body of work, which focuses on the “enduring struggle” for Black Americans to receive a quality education.

“I always have built history into my journalism because I know that we are willfully ignorant about our past—particularly when it comes to race and racism,” Hannah-Jones said. “I couldn’t write about what was happening in our society right now without explaining the history of how we got here.”

When Hannah-Jones shared that she had double majored in history and African American studies as an undergrad before studying journalism in graduate school, she said she chose not to become a historian “because I wanted to write for the masses.” Nelson responded, “I would actually push back and say you are a historian in your own right. There’s no way you can read ‘The 1619 Project,’ read the work that you’ve done over your 20-year career, and not see the scholarly chops that you put into the work that you do.”

Though the project was pitched to and published by The New York Times in 2019 during the 400th anniversary of the beginning of American slavery, Hannah-Jones admitted that she never imagined “The 1619 Project” being discussed years later and that it would be banned in schools, in a handful of states across the country. Hannah-Jones’ opening essay for the project—titled “Our democracy’s founding ideals were false when they were written. Black Americans have fought to make them true”—explores Black patriotism and democracy through both personal and historical lenses.

“The project is not radical. The project is based on 60 years of study and of history that has come out of the academy,” Hannah-Jones said. “What made it radical was how it bridged that membrane between the academy and popular understanding, and [how]it was connecting kind of directly to the present, in a way that historians don’t like to do.”

“The ‘1619 Project,’ to me, was providing the language, the code for a nation that hadn’t wanted to grapple with its past,” Hannah-Jones said, “and yet we are seeing the manifestations of that past.”

The Future of U.S. Democracy 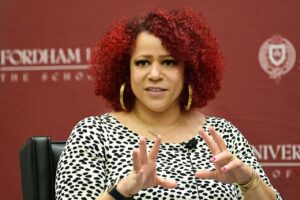 Reflecting upon the current tugs of war between truth and deception and progress and retrogression—as well as what it all means for the future of a multiracial, multiethnic democracy—Hannah-Jones expressed doubt. But she also issued a call to action.

“I think you have to have inherent optimism to do the work that you do—like you have to believe that the law can be used, even in the darkest times, to move us closer to justice,” Hannah-Jones said. “I don’t have that optimism.”

“We can sit here and hope things will get better. But Dr. [Martin Luther] King and others didn’t sit at home, hoping. They put themselves on the line and made a society that they wanted to see,” Hannah-Jones said in her concluding remarks. “I think we’re just far too comfortable with what’s happening and that we are all going to suffer, in one way or another, if we don’t decide to choose a different future.”

The lecture series honors Eunice Carter ’32, who is most known for playing a critical, behind the scenes role in the trial of notorious mobster Charles “Lucky” Luciano and his associates in the late 1930s. Carter linked prostitution in New York City to the work of Luciano, orchestrated the sting operation that resulted in Luciano’s arrest and imprisonment, and served as the only woman and person of color on Special Prosecutor Thomas E. Dewey’s “Twenty Against the Underworld” legal team.

“She did all this at a time when women prosecutors were almost unheard of and Black people were largely shut out of both the legal profession and prosecutorial roles within the profession,” Dean Diller said. “Eunice Carter’s story is but another thread in the brilliant tapestry of Black history.” 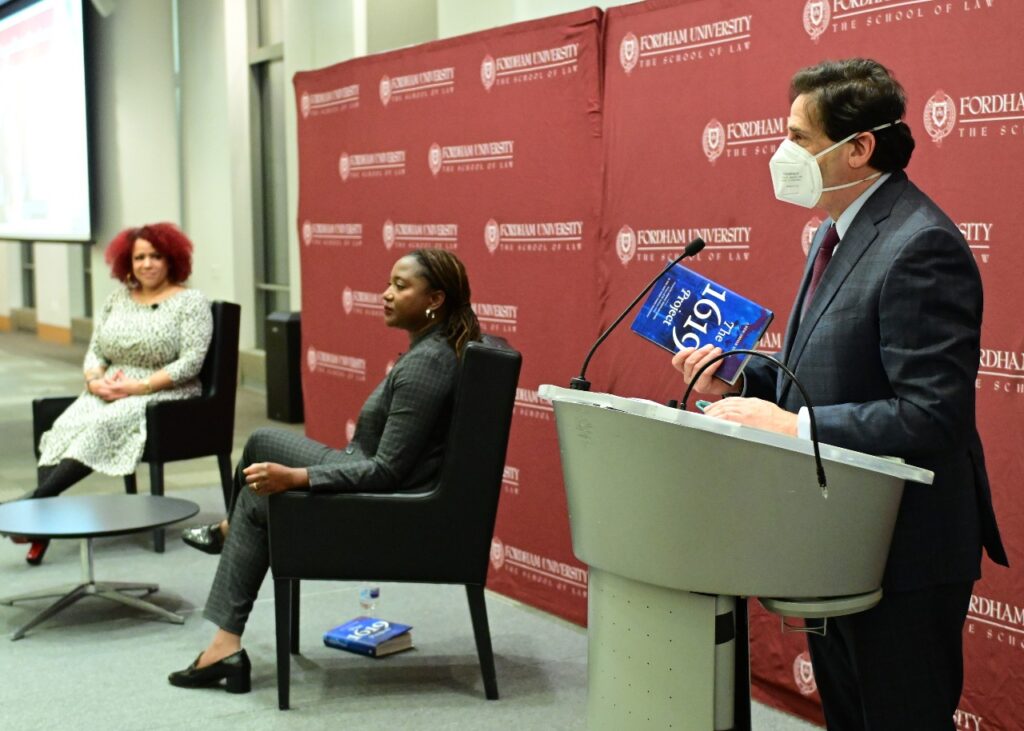 “When I looked up Eunice’s story and realized her work at the UN—in advancing the status of women—and her work with the Pan-African Congress, I thought this woman actually embodies the kind of work that I’ve been trying to do since graduating from law school,” Professor Powell said during the event to Leah Carter. “Your great-grandmother worked on these issues before we had the term ‘intersectionality’.”

In her own remarks at the podium earlier in the evening, Ms. Carter indicated that she believes Eunice would have felt “incredibly honored” at this moment as well as excited to see a “luminary like Nikole Hannah-Jones” serve as the lecture series’ inaugural speaker.

Given the theme of the evening’s event—”speaking truth to power”—Ms. Carter reflected on her great-grandmother’s own relationship with power. “Eunice blazed trails and broke glass ceilings. And, like so many who do, she gained power and influence within deeply imperfect institutions,” she said. “But she tried to make a difference where she could.”

“Eunice was someone who always worked within ‘the system,’ but that did not mean she was content to leave the world as she found it,” Ms. Carter said. “I hope we can all take inspiration from that aspect of her life.”

The program was co-sponsored and supported by Fordham Law’s chapter of Black Law Students Association, the Law School’s Center on Race, Law and Justice; as well as Fordham University’s McGannon Center; the Office of the Chief Diversity Officer, and the Office of the Provost. 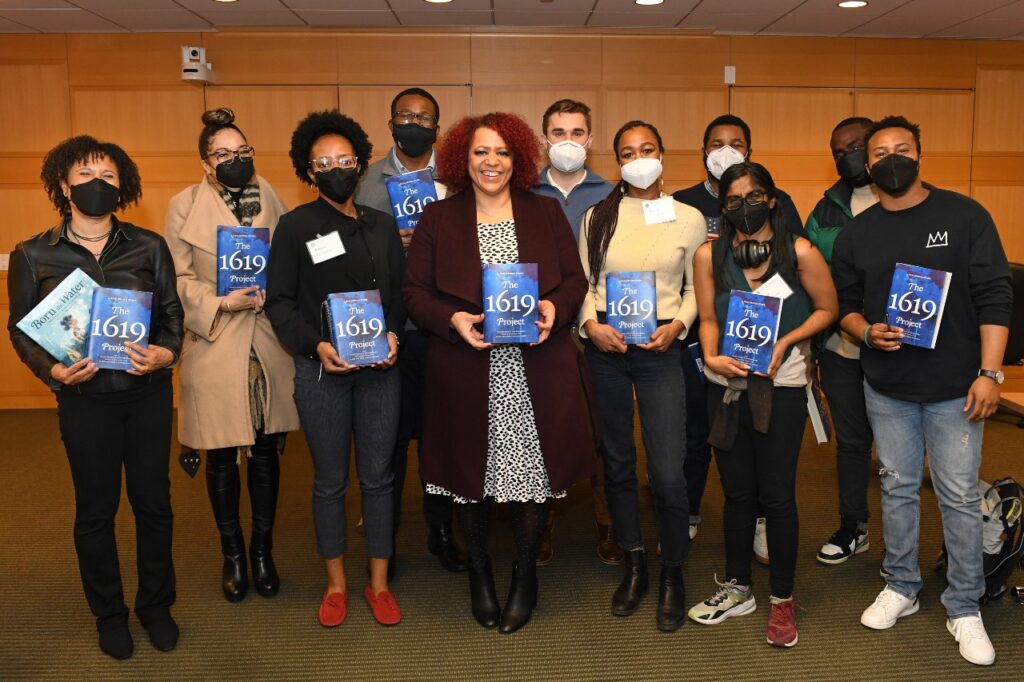 Fordham students were enthused to hear Hannah-Jones speak more in depth about “The 1619 Project” and shared their reactions online.

Listening to @nhannahjones @JNelsonLDF @ProfCatherine & Leah Aird Carter give the inaugural Eunice Carter Lecture is 100% what I was looking for when I chose to come to @FordhamLawNYC. Big props to @FordhamLawBLSA @FordhamRaceLaw and everyone else who made it happen!

Thinking about time spent w/ Prof. @nhannahjones & @FordhamLawNYC students, discussing why learning the history of the systems of race & class we live in scares some (& thus is so vital to learn). Thankful for the privilege to read of our past to better understand our today. pic.twitter.com/rXpUOSTMy9