Ahead of Earth Day, Fordham Law’s Institute on Religion, Law & Lawyer’s Work (IRLLW) invited a group of experts to discuss climate change, injustice gaps that pose a significant challenge to minority and marginalized communities, and how social, economic, and sustainable practices can be reimagined to foster environmental justice.

“This is a very timely conversation, particularly now when the war in Ukraine is reshaping the global agenda on energy matters, impacting the climate, and our shared future,” said IRLLW Director Endy Moraes during the April 6 event. “I believe that global change is possible by beginning with the small, local problems and having a shift in mindset.” 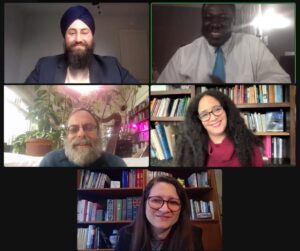 “I’m lucky to lead this conversation on this very relevant topic in modern times and to be joined by three vocal leaders in this area who have vast work experience and have been working towards helping all of us have a very bright future,” added John Yeboah Mensah LL.M. ’19, who moderated the conversation. Mensah, a lecturer at the University of Professional Studies Accra Law School and an S.J.D. candidate at Fordham Law is currently researching legal issues on climate change in Africa and the intersection between international law, human rights, and corporate and social responsibilities.

“Something that’s very key to an environmental justice analysis is looking at the cumulative impacts over time,” Salter added. “When you have an inequitable balance of those benefits and harms, have unequal protection from environmental harms, and have an unequal enforcement of environmental laws based on race, you’ve got environmental racism.”

Singh built on Salter’s thoughts, focusing on these issues from a political lens as a political organizer. “The Sikh philosophy—and I would say the political philosophy that I live by and try to enact in the work that I do—comes from the basic notion of our commonality and shared plight in the world,” Singh said. “Right now, we live in an extremely individualistic, hyper-alienated society where our common bond is not something that is in our daily thought and consciousness.” To Singh, the political answers to the issues that we’re having right now stem from the question: “how can we manifest political and economic structures that treat humanity and the globe as the singular organism that it is, as opposed to a bunch of individuals that just happen to be on the same planet with each other?”

Swartz argued that environmental injustice is not a new problem, pointing to Ezekiel 34:18-19. He noted that, for Ezekiel, being a person of faith meant speaking truth to power and standing against those who would exploit the environment at the expense of the weak. “If we take these religious texts seriously, [we see that]they uphold core civil rights principles of the dignity and value of all human beings,” said Swartz. “Those who exploit someone—because they have the power to do it—are also the ones who exploit the environment because the law does not prohibit them from doing that. It’s an ancient dynamic that is very important for us to combat.”

Towards the end of the event, attendees asked the panelists what avenues for action can be taken and how aspiring attorneys can bring environmental injustice issues to light.

Singh explained that advocacy—to regulatory bodies such as the Environmental Protection Agency and Securities and Exchange Commission, for example—should not be abandoned. Rather, he argued, advocacy should be strengthened through ongoing participation.

“The way that big environmental groups and big labor groups are working in tandem to pressure companies and the government to take climate action is important … and [plays]a very important part in the fight to take power away from these corporations,” Singh said.

Swartz spoke of how an interfaith dialogue he participated in—directed by the Vatican in October 2021, in advance of the 26th U.N. Climate Change Conference negotiations— demonstrated the importance of ensuring an open and inclusive dialogue.

“Forty of us [religious leaders diverse geographically and in terms of background]met together over a year and eventually went to the Vatican to sign a document calling for some of the principles that we’ve articulated here [during the Fordham Law conversation],” Swartz said. “The fact that we worked together in a room and talked about this, I think, was a source of hope for people. […] Even though the challenge of stepping aside from being the Prophet upfront, to become the servant leader who allows the voiceless to have a seat at the discussion table remains.” Swartz emphasized that this is an area where religious leaders can improve as they work for environmental justice.

“There has never been a more robust and energized time to get involved in climate action than right now,” said Salter. “There is so much going on, and this connection between what happens in terms of what people demand and what happens in law is very real. We, as attorneys, have a special role because we are one of the tools to bring voices into this space.”

An example Salter provided to the audience was how the New York Renews coalition and other groups pushed the New York State legislature to pass the Climate Leadership and Community Protection Act in 2019. At that time, it was reported to be the nation’s most aggressive climate law, setting legally binding emissions reductions standards that would make the state fossil fuel-free by 2050 and mandating that 40% of state climate and energy funding be invested in disadvantaged communities.

“The act then became the inspiration for the federal Justice40 Initiative, the Biden administration’s environmental justice pledge [established in July 2021]to put 40% of [​​federal investments in climate and clean energy] into disadvantaged communities,” Salter said. “State and local action can translate into the change we want to see.”

“We want to emphasize community, supporting each other, [and]optimism in the face of what we’re dealing with—and if you are free on April 23—you can start by joining the New Rochelle Earth Day Environmental Justice Rally and Walking Tour,” she added.