Who should act as president if the president and vice president are not able to do so or their offices are vacant?

The U.S. Congress last answered this question 75 years ago with the passage of the Presidential Succession Act of 1947. Since then, contemporary events—like the ongoing coronavirus pandemic and threats to government officials—have raised questions about the government’s responses to potential political instability, bringing the topic of presidential succession back into the national conversation.

Post-inaugural presidential succession is currently governed by two major sources of law—the Presidential Succession Act of 1947 and the 25th Amendment (ratified in 1967). Both were crafted in response to presidents’ deaths and under the shadow of a nuclear age.

“Seventy five years after the passage of the 1947 law, we’re living through our own extraordinary times,” said Dean Matthew Diller. “Current events have raised questions and increased anxieties about our country’s succession plans. What would happen if a terrorist attack or a pandemic more virulent than COVID-19 incapacitated our elected officials? What if a contested election prevented a winner from emerging by the start of a new presidential term on January 20?”

“Lawyers, academics, and, frankly, our country would be much better served by clarity and stability on these important questions,” he added.

The Leading Pioneer in the Field 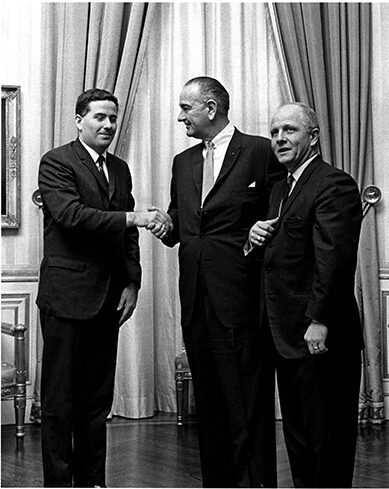 John Feerick with President Lyndon B. Johnson and Representative Richard Poff at the White House in 1967. The 25th Amendment was passed by Congress July 6, 1965 and ratified February 10, 1967.

Fordham Law was the perfect host for this symposium, given its speciality in the area of presidential succession. In October 1963, future Dean John Feerick ’61 published an article in the Fordham Law Review about presidential succession. Just one month later, President John F. Kennedy was assassinated, and Feerick was called upon to be a part of the legal response to the tragedy. Feerick helped craft the 25th Amendment and shepherded it through ratification. He has since continued this work throughout his career, hosting symposia at the Law School on the topic as well as leading two clinics to devise improvements and resolve unanswered questions, should they arise in emergencies.

“Concerns have been raised about the statutes’ adequacy at this time in history and proposals have been advanced to change it,” said Dean Feerick. “The tragedies of September 11, 2001 and the January 6, 2021 assault on the Capitol are reminders of the importance of having safeguards in place to deal with the unexpected.”

“Dean Feerick really is the dean of presidential succession studies,” said Dr. John C. Fortier, senior fellow at the American Enterprise Institute and executive director of the Continuity of Government Commission, who served as a symposium panelist. “All of us have learned a lot from him and have benefitted from both his wisdom and practical experience.”

A Witness to Presidential Succession

The Hon. Jeh C. Johnson—partner at Paul, Weiss, Rifkind, Wharton & Garrison, and former secretary of the Department of Homeland Security and general counsel of the Department of Defense during the Obama administration—delivered the keynote address. Johnson explained his unique perspective on presidential succession, saying, “I speak not as an expert on the subject of presidential succession, but as a fact witness.” Johnson served as the designated survivor during the 2016 State of the Union Address and for the Presidential Inauguration in 2017. A designated survivor is a member of the cabinet eligible to succeed to the presidency and is instructed to be absent from a gathering attended by the president and other potential successors so as to be able, in case of an attack killing those at the event, to serve as acting president.

“Being designated survivor during an inauguration is fundamentally different because the entire [current]  cabinet is resigning and then a new Cabinet will come into existence upon confirmation of the Senate, [which]  doesn’t happen right away when the President takes the oath of office,” Johnson said. “You’re looking at Donald Trump’s first Cabinet officer for [the first]  seven hours and 28 minutes [until successor John Kelly was confirmed by the Senate to lead the Department of Homeland Security].”

“It is quite a remarkable thing that doesn’t happen to too many people—from being second or third in the presidential line of succession, with a lot of security surrounding me, to being a private citizen in an instant,” he added. “It was a wonderful liberation, which I will never forget.”

Johnson argued that American leaders must put their oath to support and defend the Constitution above all else, including political fortunes.

“We are a nation of laws [that]  still depends upon people of goodwill, with a sense of history, and love of country,” he said. “At this conference, and others like it, the question we must ask is: do we go on as we have and trust that in times of crisis there will be enough adults in the room to do the right thing to save our democracy? Or do we conclude that we are different now and that we must tighten our laws and constitutional provisions to stave off a descent into something un-American? Our democracy depends upon the answer to this question.”

Pressing Matters on the Table

During the first panel, titled “Legislative Succession to the Presidency,” the panelists provided historical context on the Presidential Succession Act and the 25th Amendment and discussed potential disadvantages and benefits of including lawmakers in the line of succession. Across different threads of conversation, Fordham Law Visiting Clinical Professor John Rogan ’14 spoke with Joel K. Goldstein, Vincent C. Immel Professor of Law Emeritus at St. Louis University School of Law, Dr. Norman J. Ornstein, advisor to the Continuity of Government Commission, and Seth Barrett Tillman, associate professor at Maynooth University Department of Law (Ireland) about whether the succession of legislators should be maintained—and, if so, where they should rank amongst Cabinet officers.

Harry S. Truman taking the oath of office at the White House on April 12, 1945 after the death of President Roosevelt. (Photo: Abbie Rowe, Public domain, via Wikimedia Commons)

Jacob explained how the nation was confronted with two presidential succession issues in January 2021. First, questions about the transition of power and whether electoral votes could be rejected in Congress were raised during and after the Jan. 6 attack. The following week, Congress called for invoking the 25th Amendment.

“Both the Electoral Count Act and the Presidential Succession Act, I think, were similarly situated in this regard, in terms of whether the courts would get involved in a dispute,” Jacob said. “What I would submit is that both in the case of the Electoral Count Act and the case of the Presidential Succession Act, the courts would and should intervene—because if they don’t, there is no other actor to decide this question.”

The third and final panel, titled “Real World Scenarios: Illness, Catastrophe, and Governmental Response,” provided the audience with a sense of the practical realities of the 1947 statute (including examples from when presidents and vice presidents were incapacitated due to illness or had died), efforts previously made by the U.S. government to preserve its continuity, and the White House counsel’s perspective on presidential health and why succession matters. Speakers included panel moderator Roy E. Brownell II, a member of the Continuity of Government Commission; ​​Dr. Joseph J. Fins, E. William Davis, Jr., M.D., Professor of Medical Ethics at Weill Cornell Medical College; Dr. Rose McDermott, David and Marianna Fisher University Professor of International Relations at Brown University; Garrett M. Graff, author of Raven Rock: The Story of the U.S. Government’s Secret Plan to Save Itself—While the Rest of Us Die; Dr. Rebecca C. Lubot, a director at Porzio Governmental Affairs; and Ambassador (ret.) Arthur B. Culvahouse Jr., former White House Counsel to President Ronald Reagan and co-chair of the Continuity of Government Commission.

Fortier closed the day’s event emphasizing why these kinds of symposiums are both valuable and necessary for academic and legal discourse. “Continue the good work in thinking about these things and the ways in which one could practically affect some of them,” he urged the audience. “But let’s also make sure we’re continuing this conversation, both at the general level and in a number of specific areas, which I think will bear some fruit as we go down the line.”

The third panel of Fordham Law’s “The Presidential Succession Act at 75: Praise It or Bury It?” symposium aired on C-SPAN 2 on June 25. Watch the program here.