On April 19, Fordham Law’s Asian Pacific American Law Students Association (APALSA) honored the memory of Vincent Chin and countless victims of anti-Asian violence through its first in-person trial reenactment since the coronavirus pandemic began. It also marked the return of one of the most highly anticipated and well-attended events held annually by the student organization.

This year, a cohort of Fordham Law students, faculty, alumni, and special guests—including Judge Denny Chin ’78, Fordham Law’s Lawrence W. Pierce ’51 Distinguished Jurist in Residence, and his wife Kathy Hirata Chin, partner at Crowell & Moring—participated in the Vincent Chin trial reenactment to retell “this tragic, but important piece of history.” Judge Chin and his wife have produced and performed a series of notable trials with the Asian American Bar Association of New York and other organizations throughout the country and around the world since 2007. 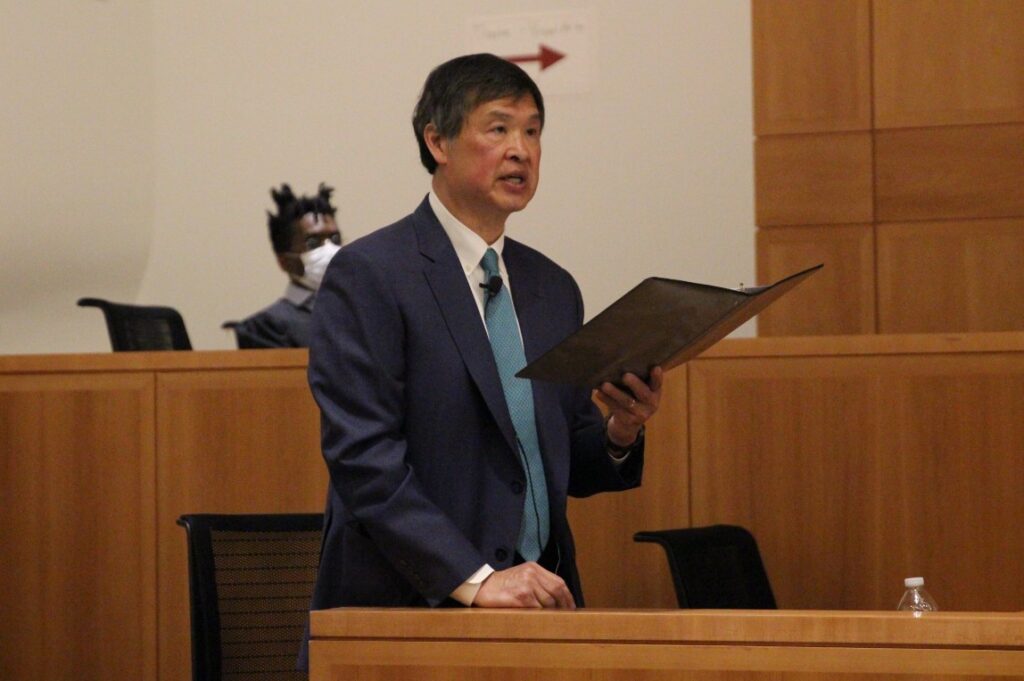 “The Vincent Chin trial was one of our very first reenactments, and it has been performed more than 30 times all over the country by other groups,” said Judge Chin. “Kathy and I even went to Switzerland one year and did it with the Chicago Bar Association and European lawyers to help promote diversity in Europe. It’s been very gratifying to be a part of this.”

Vincent Chin, a 27-year-old Chinese American immigrant who worked as a draftsman at an engineering firm and waited on tables at a Chinese restaurant on weekends, was beaten to death with a baseball bat by two white auto workers during the height of anti-Japanese sentiment in Detroit in 1982. When the Wayne County Circuit Judge imposed on each defendant a sentence of only three years’ probation, a $3,000 fine, and court costs, Asian Americans around the country galvanized to form a real community and protest movement—more publicity than had ever been devoted to any prior incident involving an Asian American person.

Organizers took their concerns to the federal government, arguing that Vincent Chin was targeted and ultimately killed because he was Asian American. Rev. Jesse Jackson became the first national political leader of any race to speak out against violence against Asians, appearing with Lily Chin, Vincent’s mother, in San Francisco’s Chinatown in May 1983. The public pressure pushed the federal government to bring a civil rights prosecution against Chin’s murderers, the first time it had ever done so for an Asian American person.

“The Vincent Chin case is very much a part of our legacy as Asian Americans,” Judge Chin said.

A panel discussion took place after the reenactment, focusing on the continuing issue of anti-Asian American violence and the difficulties in confronting civil rights abuses predicated on racial animus. 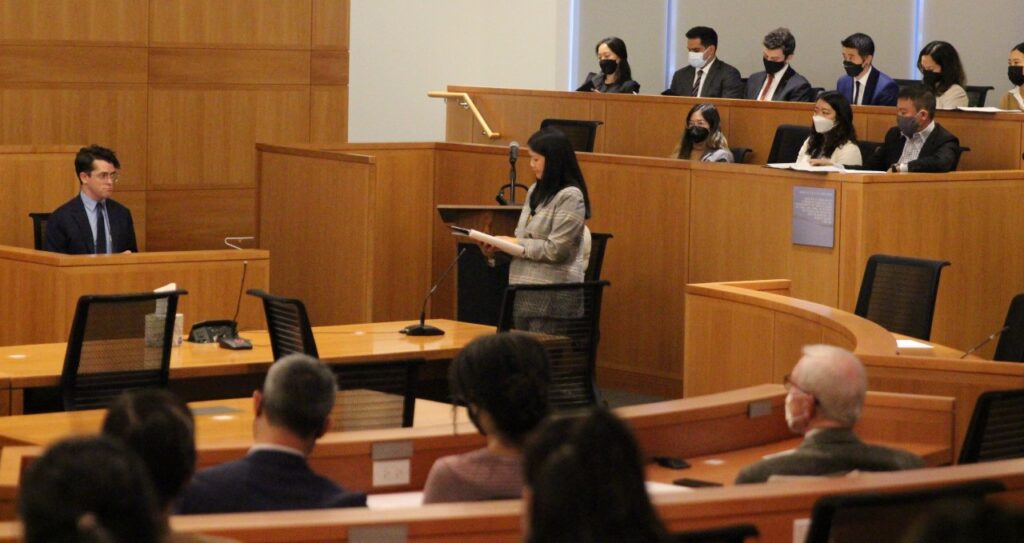 Many Fordham Law members shared why holding this trial reenactment and panel discussion was important to them and for the community at large.

“The context, causes, and consequences of the Vincent Chin case all have been the subject of great controversy,” said Kathy Hirata Chin. “Although the case has ceased to be infamous, for Asian Americans, it has never stopped being iconic. Today, as the wave of anti-Asian violence that spreads nationwide with a pandemic continues, it has become more relevant than ever, for all Americans.”

“The prosecutor’s office valued Chin’s life so much that they didn’t bother sending a prosecutor to present the state’s case,” APALSA President Melissa Dzenis-Garcia ’23 said to the audience. “Your being here is a part of the quest for justice, albeit an imperfect justice, for Vincent Chin. I wish I could say that his [name]was the only name we need to bear witness to tonight. But it’s not.”

“Proving intensive racial animus is no clearer nor no easier in the law today than it was all those decades ago; some would say it’s harder,” Dzenis-Garcia added. “We hope that today’s conversation can help us understand why.”

Thomas Lee, the Leitner Family Professor of International Law, thanked APALSA for organizing and putting on a “memorable and poignant reenactment.” “I think it’s really great that people come together at these kinds of events,” he said, “but sustained effort is what is required for real cultural change.”

APALSA member Nicholas Loh ’22, who participated in the reenactment, recalled how, growing up as a young Chinese American boy, he was always struck by Vincent’s last words, “It’s not fair”—“both because Vincent’s killers were never held responsible and because he was killed just a few short days before his wedding,” Loh said.

“During this reenactment, I reflected on the immense privilege of entering a profession where I get to advocate on behalf of communities of color, especially having experienced two things Vincent had been robbed of—a wedding and a 28th birthday,” he added.

After the trial reenactment, Lee led a panel discussion with Judge Chin and Professor Bennett Capers, director of the Center on Race, Law & Justice. Together, they summarized the trial reenactment, dissected the court proceedings that took place four decades ago, and discussed the current resurgence of anti-Asian violence.

“I had no idea that this practice [of prosecution not appearing before the court]even existed,” Capers said. “It’s so normalized now that the state has the right to speak at sentencing and then the defense has an opportunity to speak. So, the idea that this wasn’t happening in Detroit because they were overloaded with work … was atypical [and]probably a product of its time.”

“I am flabbergasted that there was no prosecutor at the sentencing. Even though it’s manslaughter, there was still a death,” commented Judge Chin. “Another problem is that [Vincent Chin’s] family wasn’t there and not notified. In federal court cases, the victims’ families are notified [because]they have a right to be there.”

“We don’t get many murder cases, but I had a few with federal connections and it was very powerful at sentencing when a member of the family was there to talk about the loss,” said Judge Chin, speaking to his earlier experience as a trial judge. “One good thing, as we say in the script, is that there was an outcry and things were improved after this [trial].”

Raising Awareness Outside the Mock Courtroom

“It’s important to try to cast a light on these things, even though it’s more challenging,” Judge Chin said. “Only by doing that, we think, will we be able to take some steps toward reducing the violence.”

Judge Chin and Lee also announced the creation and impending launch of the Center on Asian Americans and the Law at Fordham Law School, which will further dialogue and collaborations both inside and outside the Law School.

“It’s just getting off the ground and we’re very excited about this,” Judge Chin said. “This is an academic endeavor [that]you’ll be hearing more about in the weeks, months, and years to come.”