On April 7, LatinoJustice President and General Counsel Lourdes Rosado spoke with Fordham’s Latin American Law Students Association and other members of the Law School community about her career as a lawyer and her organization’s recent successes and initiatives.

Rosado joined LatinoJustice in September 2021. She previously worked as a program director at the New York Civil Liberties Union and served as the associate director of the Juvenile Law Center and chief of the Civil Rights Bureau in the New York State Attorney General’s Office. She is the third woman to occupy the top leadership role at LatinoJustice, a Manhattan-based civil rights organization founded in 1972 as the Puerto Rican Legal Defense & Education Fund. Today, the organization’s mission is “to create a more just society by using and challenging the rule of law to secure transformative, equitable and accessible justice, by empowering our community and by fostering leadership through advocacy and education.”

The discussion was moderated by Tanya K. Hernández, the Archibald R. Murray Professor of Law at Fordham, who asked Rosado to explain her career trajectory and provide insight on some of the challenges she has faced along the way.

From Journalism to Juvenile Justice 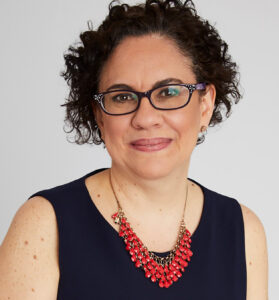 Early in her career, Rosado worked in journalism as a reporter and researcher for Newsweek, but became dissatisfied with the work she was assigned. After speaking with some friends who were public interest lawyers in New York City and seemed passionate about their work, Rosado decided to apply to law school, eventually landing a Root-Tilden public interest scholarship to study at New York University Law School.

“I always think of myself as a late starter,” said Rosado. “I was working all these publishing and journalism jobs for about six, seven years before I finally figured out [that]this is not for me.” With the support of her family, Rosado was able to do a career pivot in her late 20s—a decision she does not regret, she says. “It was definitely the right decision,” Rosado said. “It’s been a great privilege to be doing this work.”

During her second summer in law school, Rosado helped represent the family of an 18-year-old boy who, after being convicted of minor drug possession, was sent to a military-style bootcamp run by the state of New York and died at the hands of guards 24 hours after arriving at the facility. The case had an impact on Rosado, and would determine the course of her career for years to come.

“I remember thinking ‘this is so profoundly wrong and evil,’” said Rosado. “That’s how I really became involved in working on children in the justice system.”

After more than 20 years working in the field of juvenile justice, Rosado eventually pivoted again—this time to take on civil rights more broadly. She said it was a move that coincided with the U.S. presidential election of Donald Trump in 2016 and the anti-immigrant agenda of his administration. As chief of the Civil Rights Bureau for New York’s Attorney General, Rosado later became active in the fight against the ban on immigrants from majority-Muslim countries as well as opposing the rescission of the Deferred Action for Childhood Arrivals (DACA) program, which led her to work more closely on issues related to the Latino community.

Now, at LatinoJustice, Rosado says the organization’s primary concern is the “well-coordinated, well-financed efforts to suppress the growing power and influence of the Latinx community.” Despite the growth of that community (as seen in recent census data), Rosado explained that members of the Latino community remain sidelined in some of the most basic aspects of democracy, including voting rights and redistricting measures.

“We’re seeing all these efforts … [that]prevent us from exercising the power and influence that we should be able to have, given our numbers,” said Rosado.

The problem extends even further to issues of proportionate representation in terms of the number of elected officials and federal judges, Rosado pointed out. According to one recent analysis from the National Association of Latino Elected Officials, even with recent increases, less than two percent of elected officials in the United States are Hispanic, despite making up approximately 18 percent of the total population.

This, Rosado argued, is something that needs to be addressed. “We are not getting access to the places where we can actually make decisions and promote the change that will allow us to enact policies and laws that will benefit our population, as well as people of color generally,” she said. “That, I think, is the biggest challenge that we’re facing.”