Return to Fordham Law School
You are at:Home»Center for Judicial Events & Clerkships»Judicial Center Welcomes Judge Zahid Quraishi as its 2022-2023 “First to the Bench” Speaker

On Oct. 26, the Center for Judicial Events & Clerkships (CJEC) welcomed Judge Zahid N. Quraishi of the U.S. District Court for the District of New Jersey as its speaker for the Fourth Annual First to the Bench Program. Judge Quraishi is the first Muslim-American to serve as an Article III judge in the United States, and was the first Asian-American to serve on the federal court in New Jersey upon his appointment as a U.S. magistrate judge for the District of New Jersey in the Trenton Vicinage in 2019.

Over the 230-year history of the U.S. judicial system, more than 4,200 people had served as Article III judges on the U.S. District Courts, Appeals Courts, and the Supreme Court. Not one had been a Muslim American until Judge Quraishi’s appointment last year.

Held in person for the first time since 2020, this year’s fireside chat created a dynamic conversation between the judge and the attending members of the law school community. CJEC Assistant Dean Suzanne M. Endrizzi ’96 moderated the discussion which included Judge Quraishi discussing his upbringing in an immigrant family, his unique path to the bench, and words of encouragement for the attending law students.

“Judge Quraishi recounted his personal experiences and his path to the bench with genuine modesty and refreshing humor,” said James J. Brudney, Joseph Crowley Chair in Labor and Employment Law and CJEC Faculty Director. “His inspirational story should help convey to our students, and especially first generation students, how big a difference they can make as they enter the profession.” 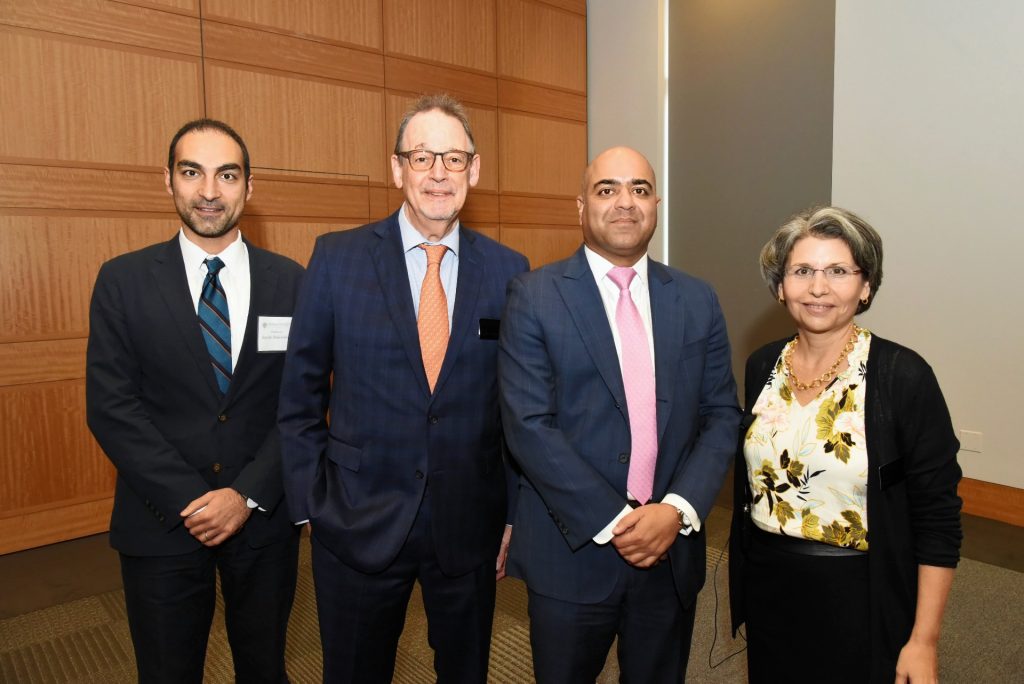 A Time and Place for Everything

While sharing insights into his varied legal career with the audience—which included members of the Law School student body, faculty, and administration as well as members of the alumni community —Judge Quraishi recalled his upbringing as the child of Pakistani immigrants in the predominantly white neighborhood of Fanwood, New Jersey.

“I think I was like any other student, or anyone growing up with immigrant parents—you’re struggling with cultural differences and just want to be like everybody else,” Judge Quraishi said. “Obviously, as you get older, you grow much more comfortable in your own skin …. But I think that upbringing shaped me in a lot of ways. Before my father passed away [in April 2020], I thanked him for what he had done by planting us in an area where I was going to be different and where I was forced to assimilate.”

After graduating from Rutgers Law School (Newark), Judge Quraishi clerked for the Hon. Edwin H. Stern of the Superior Court of New Jersey’s Appellate Division and worked as a litigation associate at LeBoeuf, Lamb, Greene & MacRae. The events that took place on his first day at the law firm—September 11, 2001—dramatically altered and shaped his life.

“We all remember where we were on September 11 … and, for me, it ended up changing the trajectory of my entire career,” Judge Quraishi said. “By 2002, I was applying to the Army, and by 2003 I was gone, leaving behind my law firm and life in New Jersey. … That’s not necessarily the action everybody should [have taken]after 9/11, but it was my calling.”

Judge Quraishi served as a military prosecutor and achieved the rank of captain in the U.S. Army Judge Advocate General’s Corps. He was assigned to the First Infantry Division, stationed in Germany, and deployed to Iraq in support of Operation Iraqi Freedom in 2004 and 2006 before being honorably discharged.

“The military environment, which I have a great amount of respect for, exposed me to public service in a much broader way, and really influenced me when I came home,” said Judge Quraishi, noting that he wanted to work as a federal prosecutor. 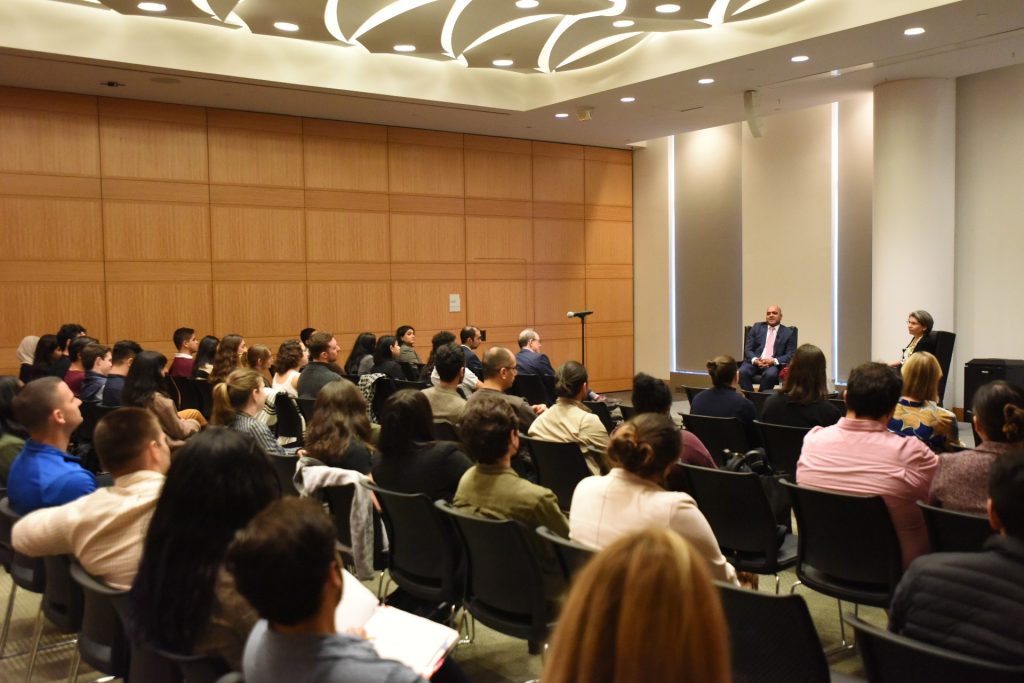 A Responsibility to the Next Generation of Lawyers

Judge Quraishi represented the United States in political asylum cases during his eight-month stint as an assistant chief counsel and trial attorney with DHS. He then served as an Assistant U.S. Attorney in the U.S. Attorney’s Office for the District of New Jersey for over five years, trying numerous federal criminal cases that involved public corruption, financial fraud, perjury, firearms, and narcotics offenses within the Special Prosecutions Division and Organized Crime Drug Enforcement Task Force and Government Fraud Units of the Criminal Division.

Judge Quraishi went into private practice prior to his appointment to the federal bench, becoming chair of Riker Danzig’s White Collar Criminal Defense and Investigations Group and his firm’s first chief diversity officer. “As things were going well, two openings came up for U.S. magistrate judges—one in Trenton and one in Newark [New Jersey],” he recalled. “That’s when it hit me that I was going to apply.”

Judge Quraishi admitted to thinking he was not going to get the job at first. “Nobody ever says ‘I’m going to be the first anything,’” he said. “That’s not how we think. I’m thinking, ‘I really want this job.’ The consequence of being the first is troublesome to me because it brings so much attention … and it has taken me some time to grow accustomed to this attention.

“What I appreciate, though, is that I have a very different platform now,” Judge Quraishi continued. “I have a responsibility to that platform to answer questions and to speak about this shot … with the goal of getting others here and to diversify the bench more. If I can contribute to that, I will.” 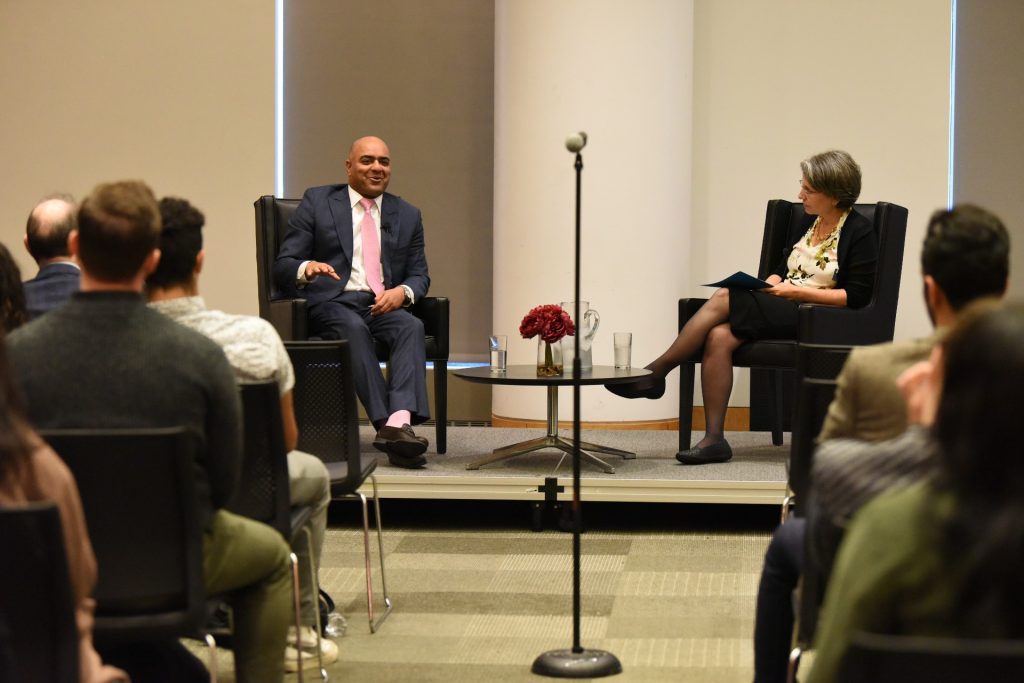 During the Q&A portion of the fireside chat, Judge Quraishi answered audience questions, from the challenges he faced when becoming a judge to ways in which the legal field can be diversified. He also encouraged the students in the audience to consider joining affinity bar associations in law school and to pursue their passions with gusto.

“Figure out what you want to do and then have the audacity to go and do it,” Judge Quraishi urged. “Have the guts to not worry about rejection, but to say, ‘I really want this and I’m qualified to do it.’”

That piece of advice resonated with Abdul Hafiz ’19, director of the Muslim Bar Association of New York, who returned to Fordham Law to attend the event. “Judge Quraishi’s points about pursuing positions of power because you have the qualifications—not because you seek to be the ‘first’—particularly emulated with me,” he said. “I thought the event was well-received and I look forward to seeing more events like this offered in the future.” 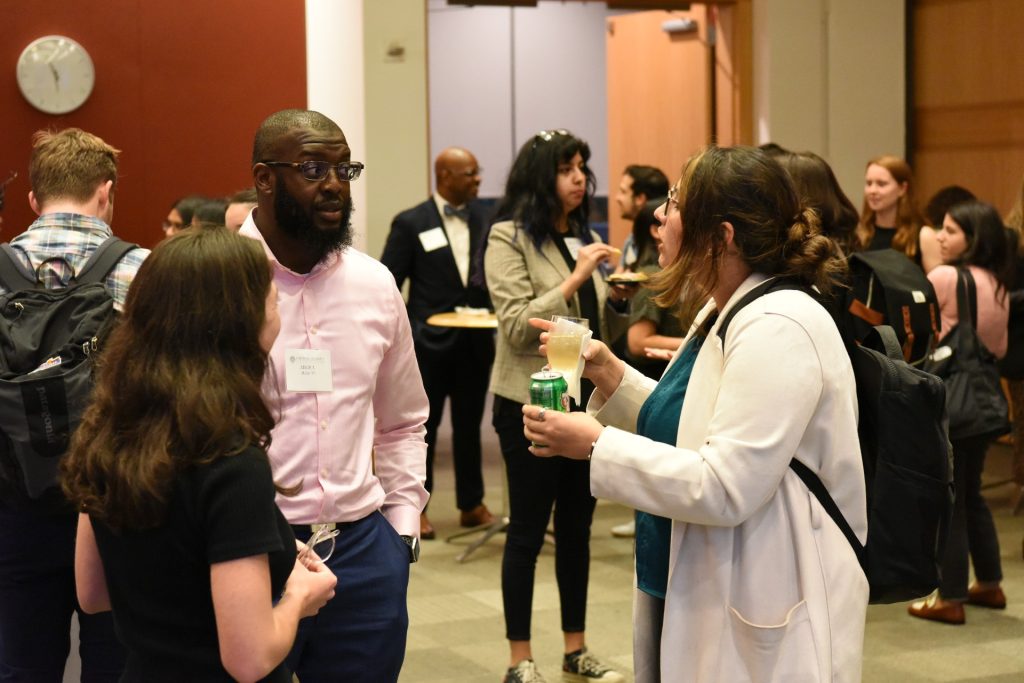 Prior to the Fireside Chat, the CJEC hosted a small session welcoming the pre-law students participating in the Law School’s Increasing Diversity in Education and the Law (IDEAL) program. Judge Quraishi was joined by student leaders including the chairs of the Muslim Law Students Association (MLSA) and the CJEC’s Peer Clerkship Council DEI subcommittee.

“It was a special opportunity for Muslim students in particular because we all remember when Judge Quraishi was appointed and made history in 2021,” said MLSA President Nayab Khan ’24. “Meeting a federal judge in general is rare, and so meeting Judge Quraishi was especially meaningful. He took the time to speak to individual students after the fireside session was over, and we were pleasantly surprised at his approachability, humor, and candor.”

“We learned so much from Judge Quraishi’s story – due in no small part to his approachable demeanor and openness about his entire journey to the bench,” added Tammy Zapata ’24, co-president of the First-Generation Law Students organization (F1GS). “He inspired everyone in that room to take life by the horns, and to always pursue your passions.” 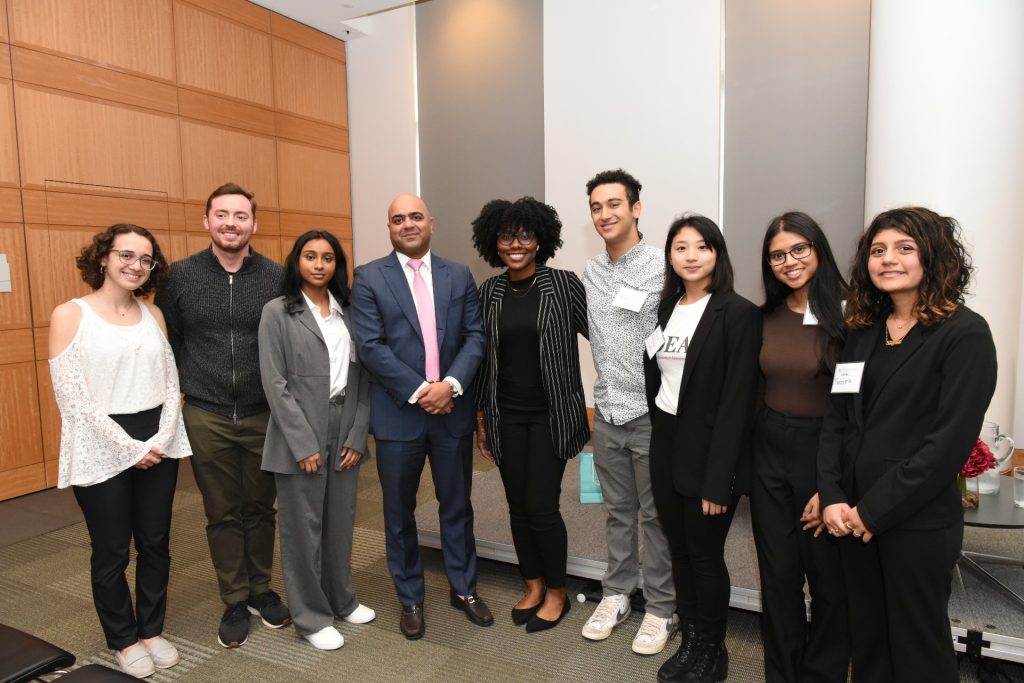 Judge Quraishi with members of the IDEAL program 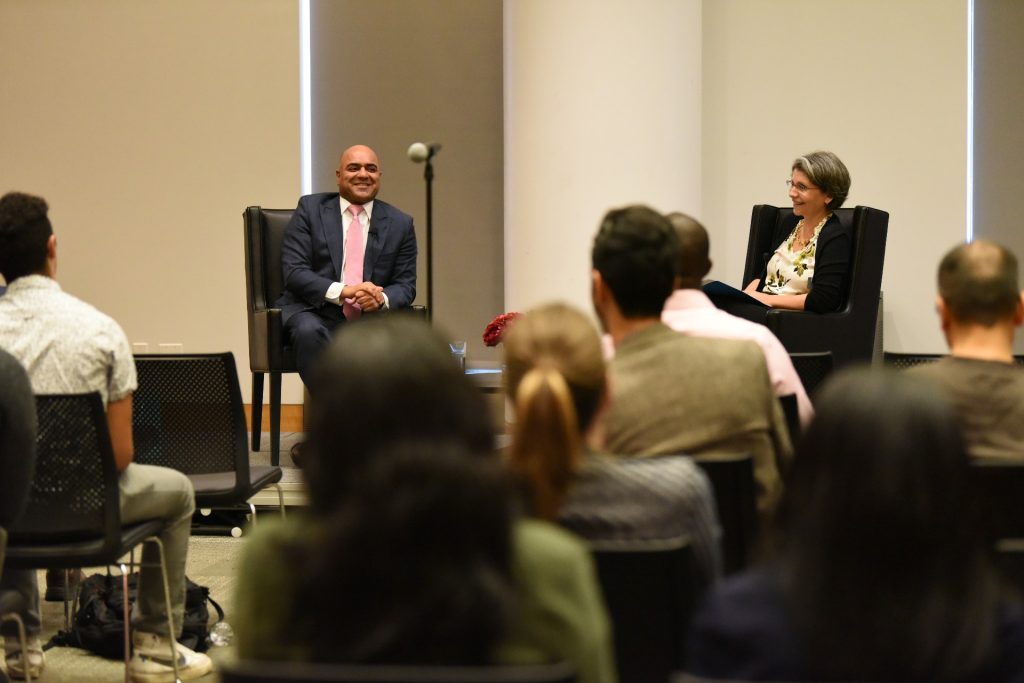 About the First to the Bench Program

The annual First to the Bench Program is a collaborative initiative between the CJEC and F1GS designed to provide first-generation students who are immigrants, first-generation college students, or first-generation law students to engage with esteemed members of the judiciary who are themselves first generation. Since the start of the initiative in 2019, the CJEC has been honored to host Judge Christine Arguello (U.S. District Court for the District of Colorado), Judge Denny Chin ’78 (U.S. Court of Appeals for the Second Circuit), Judge Diane J. Humetewa (U.S. District Court for the District of Arizona), and Justice Maria Araujo Kahn ’89 (Connecticut Supreme Court).