Fordham Law School hosted high school students from across New York City for the Justice Resource Center’s MENTOR Moot Court Competition. The MENTOR Program, which is celebrating its 40th year of creating connections between students and practicing lawyers, has partnered with the Law School to host the competition since 1984.

This year’s competition hosted 28 schools, with four students sent from each school along with several spectator students. The student teams are paired up with lawyers in roles across the legal profession, including public defenders, district attorneys, and lawyers in private practice, who serve as coaches and mentors through a multi-week series of mock trials.

“Our goal is to demystify the legal profession, and get high schoolers excited and interested in this kind of career path,” said Allison Scott ’23, mentor editor of the Fordham Moot Court Board, who wrote this year’s problem and organized the events.

Participating high school students were presented with their materials for the competition at the end of September—complete with mock fact patterns and mock lower court decisions—and were given five weeks to prepare their oral arguments ahead of the preliminary rounds on November 9. The final competition will be held in-person at the U.S. Court of Appeals for the Second Circuit in the Thurgood Marshall U.S. Courthouse in Manhattan, with federal judges presiding. 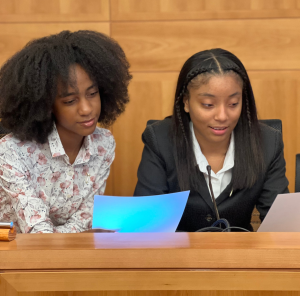 After several decades, the program has a proven track record of exposing students to careers in law which they may not have considered otherwise, said Debra Lesser of the Justice Resource Center.

“We know that this has had an impact later on in life, because a lot of the kids come back to us and tell us, ‘I did this when I was in high school and that’s when I decided I wanted to be involved in civil rights actions,’ or ‘I want to work in a law firm,’ or ‘I want to be a judge,’” said Lesser.

But even for students who aren’t interested in pursuing law, the program is an opportunity to experience new environments and develop crucial skills that can apply to a wide variety of careers.

“I can’t begin to tell you how exciting it is for the kids when they walk into Fordham Law School … and see law students that look like them,” said Lesser. “They see a world of opportunity.”

After two years of virtual competitions due to the COVID-19 pandemic, this year’s competition was held in a hybrid format. The competition returns with a renewed appreciation for in-person events, said Scott, who also has a background in speech and debate competitions.

“There’s nothing like going in person and feeling the energy in that room,” said Scott. “I’m so excited that students are able to be back in-person, arguing in front of real judges for the semifinal and final round in a real courthouse.”

The experience can be transformative for students, allowing them to apply a whole host of skills in a challenging new way and improve their confidence, said Scott.

“Getting to do this teaches students that they’re capable, and that they have the power within them to be great,” said Scott. “I think a lot of students don’t reach for greatness because they don’t think they have it. When you’re challenged to do something like this [competition], you realize that you are capable.”