Return to Fordham Law School
You are at:Home»Centers and Institutes»Fordham Law Celebrates Launch of Center on Asian Americans and the Law

The Center on Asian Americans and the Law, Fordham Law School’s newest academic center, celebrated its formal launch on November 9. Co-directed by Senior U.S. Circuit Court Judge Denny Chin ’78, Lawrence W. Pierce Distinguished Jurist in Residence, and Thomas H. Lee, Leitner Family Professor of International Law, the center is among the first in the country to focus on the intersection of the Asian American experience with legal studies. It functions as a hub and platform for interdisciplinary scholarship on issues of interest—not only to the Asian American and Pacific Islander community, but to all Americans.

Judge Chin said that he and Lee began planning to start the center after Judge Chin took senior status at the U.S. Court of Appeals for the Second Circuit in June 2021. They received early and enthusiastic support from Dean Matthew Diller and the Law School’s administration.

“Given the importance and the impact of Asian Americans on our country [and]the rich history and contributions to law, culture, economy, [and more], it is astonishing that this is the first center of its kind,” said Dean Diller at the launch event. “Its mission is particularly important at this moment, given the horrifying rise in racial animus and violent crimes against Asian Americans. And it’s more important than ever before that we put this rise in hatred into a larger and deeper context of the experience of Asian Americans here in the United States.

“Now, we officially add to our pantheon of programs a new jewel,” added Dean Diller, referring to the center. “I can’t think of anything that makes me happier than the center finding its home here at Fordham Law School.”

Lee noted three important themes across the cases under discussion: the quality of the legal representation, which he said “was excellent both in terms of personnel and the theories and the legal tactics that they employed;” the roles domestic and international politics played in the laws that were subsequently passed and in how the cases were resolved; and parallels between the historical cases and today.

“The role of lawyers and litigation was important,” said Lee. “The general view is that Asian Americans are passive and not particularly litigious. History shows how different the reality is.”

“I think the partnership and collaboration at this very table, [featuring]the different levers that we have, the different roles that we play in community, government, and civil society, and the different expertise we each have is all part of the [legal]ecosystem,” said Moritsugu. “We are stronger together.” 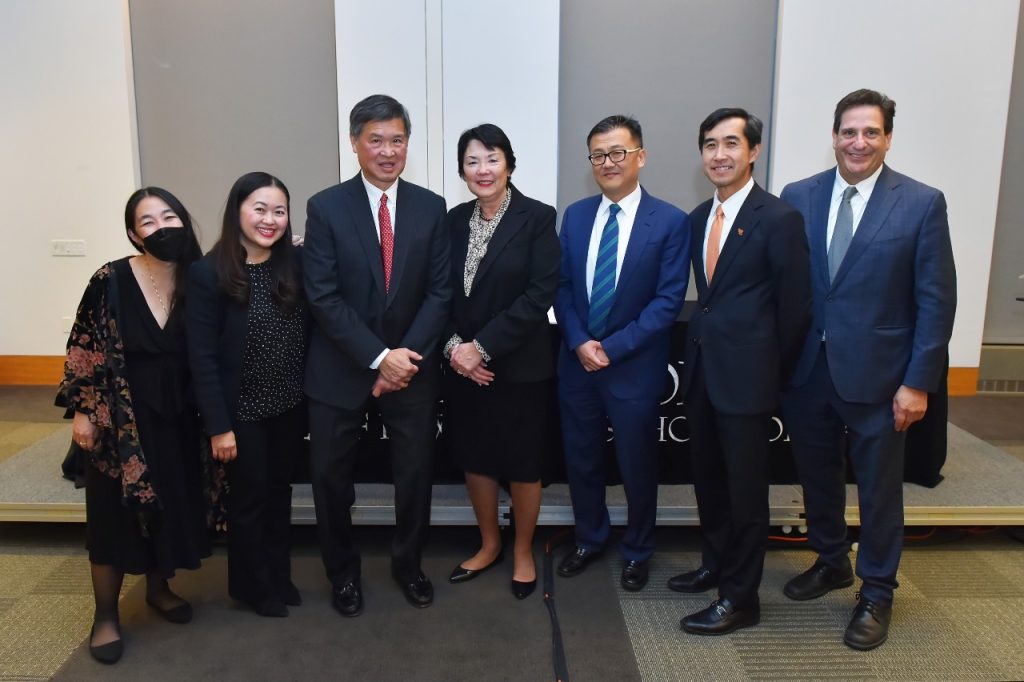 Accomplishments to Date and What’s To Come

The center began operations in the spring of 2022, building momentum through hosting small-sized events and  beginning to build relationships outside the Law School with members of the legal community ahead of its formal launch date in the fall. Highlights included Vice President Kamala Harris publishing a dedication in the Fordham Law Review; the acceptance and/or publication by law school journals of three student pieces generated by Judge Chin and Prof. Lee’s Asian Americans in the Law seminar; a summertime teaching workshop on Asian American legal studies hosted by Judge Chin and Lee; and a screening of the documentary, Free Chol Soo Lee.

The center has many ongoing plans to further dialogue and collaborations both inside and outside the Law School, including hosting speaker panels, lectures, and reenactments; organizing research in the form of digital repositories and e-casebooks; and providing opportunities for students to get involved in its work.

On February 23, 2023, the center will host a screening of the film The Courtroom to kick off the spring semester. The film, which premiered at the 2022 Tribeca Film Festival, was based on a real immigration case involving a Filipina immigrant and features BD Wong playing Judge Chin.