Return to Fordham Law School
You are at:Home»Centers and Institutes»IRLLW Conference Looks at Intersection of Religion, Law, and Immigration

Fordham Law School’s Institute on Religion, Law, and Lawyer’s Work held a conference on November 14, 2022, looking at theological, legal, and contemporary implications related to immigration. The conference was held in partnership with the Fritz Ascher Society in New York and support from the Allianz of America Corporation.

The conference, initially slated for 2020, was postponed due to the pandemic, said Endy Moraes, director of the IRLLW. However, she noted that the delay did not affect the topic’s timeliness. “With a heavy heart, I have to say that migration is still a critical issue in 2022,” said Moraes.

Tackling the theoretical and theological perspectives of the issues were scholars Ori Z Soltes of Georgetown University, who also served as the moderator for the conference; Thomas Massaro, S.J., of Fordham University; and Zeki Saritoprak of John Carroll University. Fr. Massaro expressed how “in our age of anxiety and distrust, hospitality turns out to be a perfectly countercultural virtue, even subversive at times.”

He also stressed that “it is incumbent upon people of faith to reject those tragically prevalent toxic attitudes of antisemitism, Islamophobia, and all varieties of xenophobia, which is the direct opposite of hospitality.” Saritoprak stressed that the “dialogue between Christians, Muslims, and Jews can bring a time of peace,” reducing oppression and the flow of refugees.

During the afternoon session, Rachel Stern, founding and executive director of the Fritz Ascher Society, spoke about Ascher’s story of resilience. A German Jewish Expressionist artist, Ascher’s artistic trajectory was interrupted due to persecution by the Nazi regime. Stern shared the artist’s feelings of hopelessness when he was warned of his imminent deportation to a concentration camp, wondering “how could it be that he had to beg for his life, hunted as a stranger in his home country, Germany?”

A family friend offered to conceal Ascher in their basement, despite the risks to their own life. Thanks to that act of welcoming, Ascher was able to spend much of the Second World War in hiding and survive the Holocaust.

Alfanar Venture Philanthropy Senior Advisor Carol Prendergast continued the conversation, expressing how easy it is to label refugees as a “group of strangers,” while she sees “so much individuality in every group of people.” 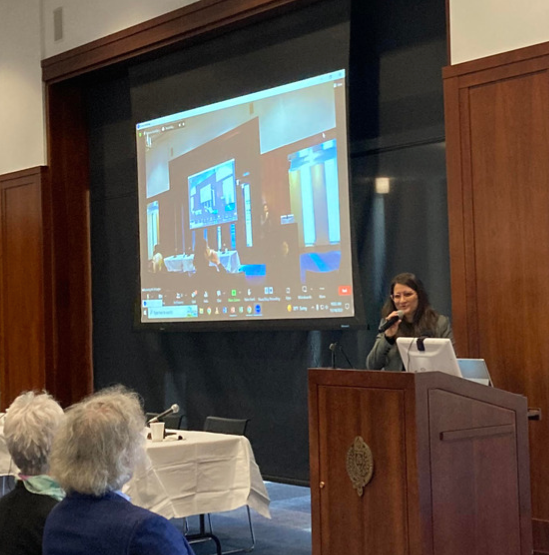 Endy Moraes speaking at the podium

Her organization works to develop creative partnerships between individuals and the resources they need to flourish. Prendergast shared many concrete projects and described the process as “innovation that comes from dynamic problem-solving with friends.”

Mohsin Mohi-Ud-Di, the founder of the global nonprofit #MeWe International Inc., explored how communication is a pillar of health and human rights. He talked about broken social systems that provide a “normalization of chronic uncertainty, fear, and stress that has fractured the relationship and communication between the self, the community, and culture.”

Mohi-Ud-Di encouraged the audience “to look at the post journey of a forcibly displaced person” and support displaced communities with tools and methodologies that can help them transform pain and suffering instead of transmitting it.

The last event of the conference was a presentation by the Hon. Mimi E. Tsankov, president of the National Association of Immigration Judges (NAIJ) and an adjunct professor at Fordham Law.

Speaking in her NAIJ capacity, Tsankov provided an overview of how immigration courts work today in the United States, which includes a complex web of agencies like the Department of Justice, the Department of Homeland Security, U.S. Citizenship and Immigration Services, and Immigration and Customs Enforcement. Judges also have to be familiar with many types of law which can intersect with immigration law, including asylum law, constitutional law, labor law, family law, administrative law, and criminal law.

Having more time to process cases is also a needed reform, said Tsankov, noting that judges can be subject to discipline if they’re found to not be working quickly enough.

“We’re very hopeful that we will see improvements in our immigration court system that address this inherent structural flaw,” said Tsankov. “If the judicial system can be improved through the creation of an Article I immigration court, that will make it less vulnerable to the see-saw of policies that are implemented with each new attorney general [who]takes on that role.”

In closing, Soltes highlighted two thoughts. “Across the vast panoply of human cultures and civilizations, humans have believed that there’s something beyond us,” he said. “[Religion] is how we connect to each other, with or without reference to that source…The takeaway of this whole day is the importance of constantly reexamining what we think we know…What we receive from our traditions should always be open to being revisited.”

He concluded by encouraging all to “keep thinking, interpreting, and working to improve the world.”