Return to Fordham Law School
You are at:Home»Blog»Solar Energy’s Untold History and the Factors Driving its Growth Today

The cost of solar energy has been dropping in recent years.[1]  In the near future, solar energy is predicted to become cheaper in comparison to traditional sources of energy, such as fossil fuel.[2]  The increasingly attractive cost of solar energy could precipitate large-scale adoption of the technology.[3]  In fact, there is evidence to suggest that renewable energy is responsible for a greater portion of new electricity generation than fossil fuel in recent years.[4]  In order to understand where this trend may take us, we need to understand the path that has led to this extraordinary stage of progress.

A brief review of the history of solar power reveals that its development was historically fueled by U.S. government spending in response to periodic concerns regarding the price of fossil fuels and, in some cases, research and development by private corporations. Generally, the cost of fossil fuels has been so cheap throughout history that meaningful development of solar energy was often neglected due to a perceived lack of economic viability.[5]  In recent years, however, the threat of climate change has given the government and private industry reason to revisit solar energy as a viable alternative to fossil fuels.[6]  The story, viewed as a whole, provides an instructive example of how thoughtful government action can encourage the profit-motivated private sector to address long-term problems that would likely remain unsolved if left entirely to industry alone.  In many ways, the recent developments are a continuation of governmental efforts to promote environmentally sustainable expansion of industry, dating back to Theodore Roosevelt’s first efforts at environmental conservation over a century ago.[7]

The Discovery of the Photovoltaic Effect and Solar Powered Steam Engines

In 1839, Edmond Becquerel, a French physicist,discovered the “photovoltaic effect.”[8]  The photovoltaic effect, which is the operating principle of solar panels, describes the tendency of photons (within sunlight) to pass along their electronic charge when coming into contact with a field generated by the composition of two semiconductors.[9]

In 1910, Frank Shuman, a Philadelphia-based inventor, created a solar powered steam engine capable of pumping 3,000 gallons of water per minute to a height of 33 feet in the air.[12]  Shuman presciently wrote in Scientific American, “[t]he future development of solar power has no limit…[I]n the near future, [solar power will]displace all other forms of mechanical power over at least 10 percent of the earth’s land surface; and in the far distant future, natural fuels having been exhausted, it will remain as the only means of existence of the human race.”[13]  Later, the British government would fund Shuman’s trip to Egypt in an effort to establish a solar powered irrigation system as an alternative to system that relied on costly imported coal.[14]  He was so successful that he subsequently received a $200,000 grant from the German government to do similar work in East Africa.[15]  Unfortunately, due to the outbreak of World War I, Shuman’s research and entrepreneurship were put to a halt.[16]  After the war, fossil-fuel prices plummeted in a recession and Shuman’s work was no longer considered economically viable.[17]

Bell Laboratories, a subsidiary of AT&T, made great strides in the area of photovoltaic technology in the 1950s.[19]  AT&T was essentially a government guaranteed monopoly at the time.[20]  AT&T’s vast resources enabled Bell Laboratories to engage in groundbreaking research in solar energy, laser technology, fiber optics, satellite communications, cellular telephone systems, and more.[21]  In 1954, Bell Laboratories, created the first Photovoltaic Cell (“solar panels”) – which is a panel capable of converting solar energy into electricity.[22]  Other scientists at Bell Laboratories went on to create solar panels capable of producing more significant amounts of electricity.[23]

Solar technology began to receive serious attention during the Iranian Oil-Embargo of the late 1970s, which caused the U.S. to confront the dangers of its dependence on oil unlike any other time in history.[24]  At the federal level, the 1978 Energy Tax Act offered a 30-percent investment tax credit for residential solar installations by homeowners.[25]  Additionally, states such as California offered tax credits as high as 55-percent.[26]  The Carter Administration went so far as to put solar panels on the roof of the White House in conjunction with a $3 Billion research program for the solar industry.[27] 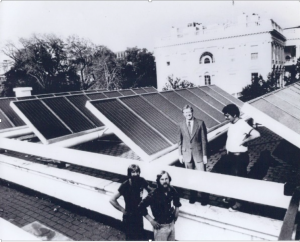 In 1986, the Reagan Administration removed the panels after it eliminated tax-breaks and research funding for solar energy.[29]  The Reagan Administration likely believed that solar energy research was unnecessary once the energy crisis had subsided and oil prices returned to historical norms. This is further demonstrative of the fact that (1) the government plays a large role in the development of solar technology, and (2) solar power’s viability is largely defined by its price in relation to fossil fuel.

Climate Change and the Solar Boom

In recent years, concern about climate change has presented a compelling new reason to look to solar energy as an alternative to fossil fuel, regardless of its cost in relation to fossil fuel. As part of the Obama Administration’s $787 billion economic stimulus in 2009, $100 billion was dedicated to renewable energy research and installation.[30]  It was also around this time that the Department of Energy (“DOE”) embarked on the SunShot Initiative which aimed to substantially decrease the cost of solar energy by financing research and development of related technologies.[31]  The effort received substantial criticism at the time when Solyndra, a DOE loan-recipient, defaulted on a $535 million loan.[32]  However, some of this criticism was likely misplaced because the program as a whole ultimately had a default rate of only 2%.[33]

Michael Lewis’s recent book, The Fifth Risk, discusses these efforts and lauds them as having a largely positive impact on the state of renewable energy in the U.S.[34]  Lewis notes that despite bumps in the road, such as the bankruptcy of Solyndra, the DOE was largely successful in its efforts.[35]  He points out that the DOE provided seed funding for Tesla, when the private-sector would not, and that there are currently 35 utility-scale solar energy plants, whereas there were zero ten years ago.[36]

As a result of these programs and increased economies of scale in production,[37] the cost of solar energy has plummeted 70-percent since 2010.[38]  It is forecasted that solar energy will be competitive on price with fossil fuels as soon as next year.[39]  This is an extraordinary development and, for this reason, the nation may be at a tipping point for the viability of renewable energy.  Existing fossil fuel plants will likely be economically viable as their construction alone represents enormous sunk cost for their operators.[40]  However, the falling cost of competitive renewable energy, in conjunction with rapid development of battery technologies, may make the economic feasibility of newly constructed fossil fuel plants increasingly untenable in the future.[41]  In fact, this is likely already occurring as growth in solar energy has begun to outpace the growth of fossil fuels in recent years.[42]

The Trump Administration’s imposition of a tariff on the importation of solar panels from China has slowed solar adoption in the U.S.[43]  However, some have argued that the near-term hurdle for the U.S. solar industry may be worth it as it could boost U.S. production of solar panels in the long-term.[44]  For example, First Solar, SunPower Corp., JinkoSolar, and Hanwha Q CELLS have all announced plans open U.S. plants or expand U.S. production in response to the tariffs.[45]

Recent calls for a “Green New Deal” at the federal level could put even more wind in the sails of solar energy than it has had up to this point.[46]  The “Green New Deal” has been criticized as somewhat vague,[47] but there are also more specific proposals at the state level.  For example, New York’s Governor Andrew Cuomo has already launched an effort to achieve a carbon-neutral economy by 2040 through substantial investment in the installation of solar, wind, and energy storage facilities throughout New York.[48]  Taken together, these recent developments at the federal and state levels represent a renewed focus on the promise of renewable energy in the U.S.

It is important to note that not all of this change will necessarily be positive from every perspective. For example, some economies in the Middle East, heavily reliant on exporting oil, could be upended. On the other hand, other countries will become more energy independent, costs of energy will fall, air-pollution and carbon emissions will decrease, and new jobs will be created to manage the transition to renewable energy. Managing the transition will require continued creative thinking by future leaders in the private sector and government as the global economy stands to be reshaped by emerging sources of renewable energy. It remains to be seen if Frank Shuman’s prophecy of a world dominated by solar power will come to fruition.

[8] See Smets et. al., Solar Energy: The Physics and Engineering of Photovoltaic Conversion, Technologies and Systems, at 151 (2016) (available in PDF at https://ocw.tudelft.nl/wp-content/uploads/solar_energy_section_11.pdf).

[34] See generally Michael Lewis, Why The Scariest Nuclear Threat may be Coming From Inside The White House, Vanity Fair (Sept. 2017), https://www.vanityfair.com/news/2017/07/department-of-energy-risks-michael-lewis.