Recent graduate and outgoing Editor-in-Chief of the Brendan Moore Trial Advocacy Center Aishling Fitzpatrick ’20 came in second place at Baylor Law’s 11th Annual Top Gun National Mock Trial Competition—the most prestigious, invite-only individual trial advocacy competition in the country. She was nominated to represent Fordham Law at the tournament, which took place from May 27 to 31, due in part to her stellar cross examination at Faulkner’s Mockingbird Competition in the fall of 2019. Fitzpatrick will be working for Kasowitz, Benson & Torres, a litigation firm in Manhattan, once she takes the bar exam.

What Makes Top Gun Unlike Any Other Competition

Unlike other trial advocacy competitions that invite teams of up to four participating students and two coaches, Top Gun allows only one student to participate in the competition, with just one coach and one second seat. Tension was high as Fitzpatrick had just 24 hours to prepare her entire case before the first round with coach Mike Higgins ’08, an Administrative Appeals Judge with the Social Security Administration, and second seat Carolyn McGuigan, rising 3L and current Managing Editor of the Brendan Moore Trial Advocacy Center. Together, they were responsible for reviewing a myriad of materials, including depositions, records, and photographs. They also needed to prepare arguments for both the plaintiff and the defendant—which meant having ready two openings, two closings, and two direct and two cross examinations for the first four rounds.

“It’s the most unique competition I’ve ever heard of, in that you really get just the 24 hours to do everything you would ordinarily do in a month-and-a-half or two months with a lot more people. That definitely made me nervous, but it was a very exciting way to handle it,” Fitzpatrick said, reflecting on her fifth and final competition at Fordham Law. “But, since this was the first virtual competition I had done, I was a little less nervous because I didn’t have to deal with physically being in a courtroom. That can be very daunting, especially when you have so many things running through your head.”

To prepare for Top Gun, Fitzpatrick and her team recreated the high-pressure atmosphere of the competition, mooting old cases under 24-hour time constraints throughout the month of May. Moore alumni (in particular Rob Iodice ’16 and Megi Belegu ’19), as well as classmates and other Moore alumni rallied behind Fitzpatrick and stepped in to serve remotely as mock judges, opposing counsels, and witnesses—all while the pandemic unfolded around them.

Another unique component of the competition is that real-life doctors and toxicologists are brought in as witnesses for the semi-finals and finals—but students are only given 20 minutes to prepare them for the case. When Fitzpatrick advanced to the semifinals, she and her team had to prepare an additional four direct and four cross examinations with the real-life experts.

“We found that out overnight. By the time her fourth round was over, we had around 12 hours to incorporate and prep those extra direct and cross examinations and get some sleep,” said Higgins, who coached Fitzpatrick for the fourth time during his decade-long career.

When Fitzpatrick was notified that she was going to advance to the semifinals, she and her team worked all night to basically prepare a whole new case with brand new witnesses. “I think Mike may have gotten one hour of sleep that night. I got about three,” she noted.

One aspect Fitzpatrick missed during this tournament was the fact that she couldn’t be with Higgins and McGuigan. 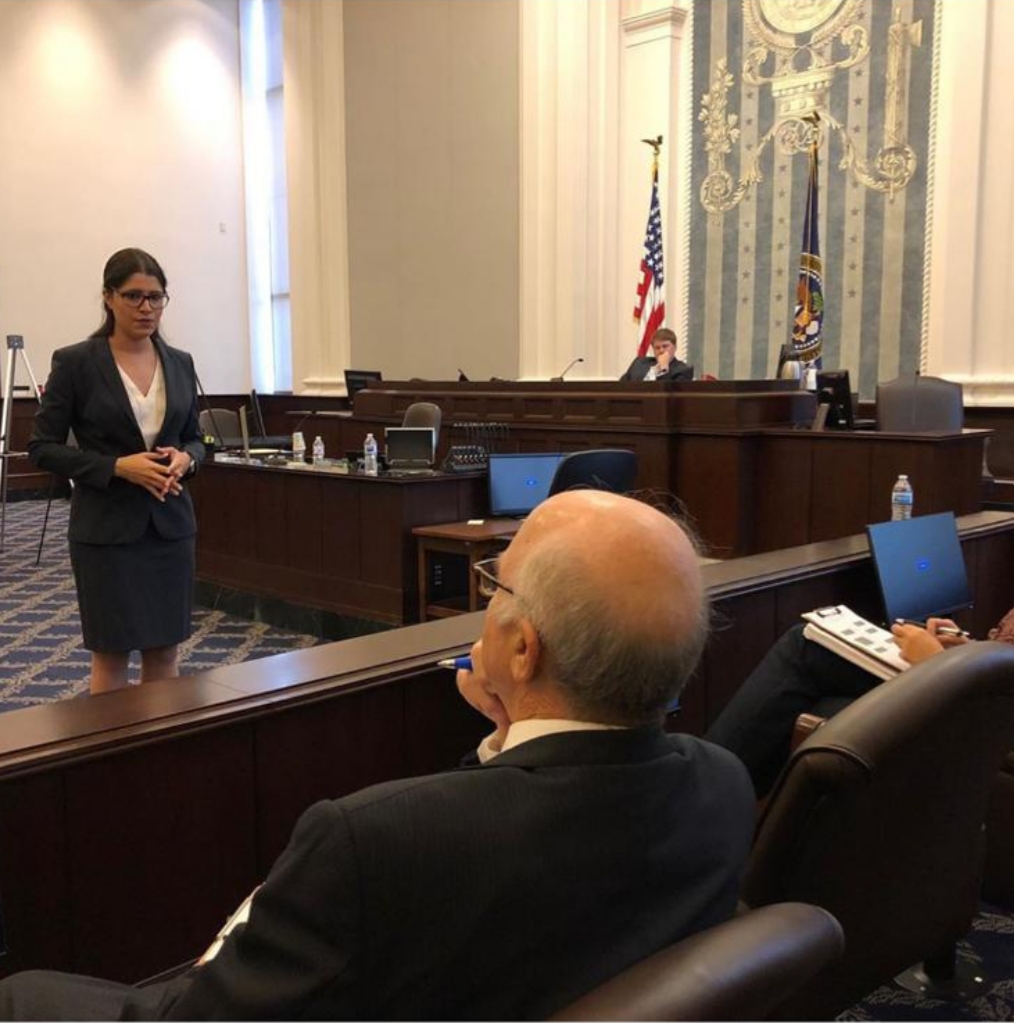 Aishling Fitzpatrick at a previous competition

“It’s much easier to communicate when you’re all physically in one room and working on the same thing together. Instead, we were texting each other and had 24-hour-long Zoom sessions. When I advanced to the finals, that’s when I really realized that I had no one to hug or congratulate. I was alone in my studio apartment in Manhattan, staring at my wall and saying, ‘Ok, I guess I’m going against …'” Fitzpatrick said. “You truly get through these competitions by having your team and coaches with you, so the lack of one-on-one contact was definitely difficult. I was very skeptical about doing a trial online, but Baylor Law School organized a really well-run competition through Zoom, given the circumstances. I think being remote took the focus off of the theatrical side of the trial because it really focused on each individual’s competitive advocacy skills.”

In the same vein, Higgins said that while he missed the experience of visualizing case theories by writing them out in-person on whiteboards, he was happy that no one could see how anxious he was. “There’s a ring in the grass of my backyard where I paced around the table that I had my laptop on while I was watching the court arguments,” he commented.

Though Fitzpatrick came in second place, Higgins emphasized the fact that she did extremely well and proudly represented Fordham Law. “Her semi-final round performance was one of the best rounds of advocacy I’ve seen from her,” he continued. “She dominated the round from start to finish.” The semi-finals, which were live streamed along with the rest of the tournament, can be watched here.

Fitzpatrick personally competed against students from five other law schools, winning four of six rounds. Because of her second place performance, Fordham Law will be automatically invited to compete in next year’s Top Gun competition. “We participated last year, and now we’re guaranteed to return. It’s nice that it’s going to be three years in a row for Fordham to be represented at this prestigious competition,” Higgins said.