Jessica Berman ’02 has been a trailblazer for women looking to break into the sports law industry for the past two decades. She has held various positions at the National Hockey League and National Lacrosse League, and now prepares to join the National Women’s Soccer League next month.

After graduating from Fordham Law, Berman joined Proskauer Rose as an associate in the labor and employment department. She later brought her talents and skills to the NHL, serving in numerous roles—including vice president and deputy general counsel, then vice president of community development, culture and growth, as well as executive director of the NHL Foundation—between 2006 and 2019. During that time, she helped negotiate the 2012 NHL/NHLPA Collective Bargaining Agreement and managed the league’s corporate social responsibility goals and initiatives.

In 2019, Berman was named deputy commissioner and executive vice president of business affairs for the NLL, becoming the first—and to this date, only—female deputy commissioner of a men’s professional sports league. While at the NLL, she provided strategic direction on all growth initiatives and legal matters facing the league.

On March 9, Berman was named the next commissioner of the NWSL, the top professional women’s soccer league in the United States. She joined Joseph Buonadonna ’22, the Fordham Sports Law Forum’s editor-in-chief and symposium organizer, for a fireside chat on March 11 to discuss her career trajectory and goals at the Forum’s 25th Annual Symposium. 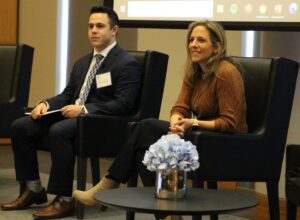 How the Islanders Helped Serve as an Inspiration

Berman realized she wanted to pursue a career in sports at age 16 when she attended a New York Islanders game with her parents and found herself sitting next to two strangers. “One [fan]was in a suit and the other was in jeans and a backwards cap. When the Islanders scored, the arena erupted and I saw them embrace, hug, and high five [each other],” she recalled. “I was really captivated by that moment and had asked them whether they had known each other [before the game]. They both said, ‘No, we just share our love for the Islanders.’”

“At that moment, I decided that I needed to work in this industry,” Berman said.

As an undergraduate at University of Michigan, Berman worked as the assistant manager for the men’s ice hockey team and the men’s football team. At Fordham Law, Berman was editor-in-chief of the Fordham Sports Law Forum, as well as associate editor of the Fordham Urban Law Journal, and discovered that she wanted to pursue labor employment after graduation. “Having studied in law school the underpinnings of sports properties in America, I felt that the roles of labor relations and collective bargaining agreements, as well as the foundation for a sports property to grow, were things I wanted to really get into the weeds of and to understand better.”

Berman’s passion for hockey came full circle years later when she landed her “dream job” working in-house at the NHL in 2006. Nine years later, she decided to take a chance and change career paths within the league, moving from legal to business.

“I essentially wrote the business proposal of a concept plan, looking at how the NHL could repurpose its investment in community to be more strategically aligned with business objectives,” she said. “[NHL Commissioner] Gary Bettman and [NHL Deputy Commissioner] Bill Daly had the confidence in me to start the process of reshaping the way that the league focused on that. I saw it … as an opportunity to lean into our sponsors and media partners, through an avenue that I felt so passionate, educated, and informed about.”

Family Values and Support are Key

Looking at her career thus far, Berman, a single mother to two children, highlighted the importance of having a support system at home.

“To be honest, I did debate whether it was humanly, physically, and emotionally possible for me to take the role of the deputy commissioner responsibilities [at NLL]because I have a lot on my plate. It was truly a family decision,” she said. “We all agreed, at that moment, that this was a step I needed to take, not just for me, but for others—men, women, individuals who historically have been recognized as being marginalized—because [sports]is a hard industry to break into.”

Additionally, Berman said she has personally re-termed “work-life balance” as “work-life integration,” where both her personal and professional lives coexist.

“That was really the reason why I’ve been able to achieve what I’ve achieved and what I expect will be necessary moving forward,” she said. “That integration has allowed me to not waste mental energy fighting the intersection and really maximize my time to be more thoughtful and tailored to the moment.”

Berman shared some of her goals as the incoming commissioner of the NWSL, including taking in information from key stakeholders, both on and off the field, in order to shape the league’s strategy moving forward. She also emphasized that working on behalf of, and in partnership with, players is her biggest priority.

“With my background in labor relations, I’m confident that I have the process and the focus to continue to make them a priority in how we operate,” she said. “I’m also very focused on media … ensuring that we’re partnering with the right platforms to push the content to the next generation [of fans], but also making sure that that content is curated in a way that’s interactive.”

“I have a lot to learn and get up to speed on, but, moving forward, the focus will be on integrity, standards, communication, and transparency,” Berman added. “That’s what will lead to trust and credibility.”

According to the NWSL, Berman will “oversee all operations of the league with a focus on supporting players on and off the pitch, working with NWSL clubs to continue to build on the positive momentum of the league’s growing audience, and collaborating with NWSL partners to create the most engaging and entertaining fan experience.” Berman’s four-year term as commissioner begins on April 20.